Former Manchester United manager Louis van Gaal has provided an in-depth interview with the BBC, the first written one with a British journalist since his departure from the most successful club in England, in 2016.

Van Gaal was replaced at the helm by Jose Mourinho two days after winning the FA Cup at Wembley Stadium with the Red Devils, the first time they had won the trophy in 12 years. He had managed Manchester United for two seasons, and just over a century of games.

The 67-year-old has left a mixed legacy at Old Trafford to say the least.

The club’s all-time top goalscorer Wayne Rooney - who van Gaal appointed as club captain upon his arrival - has recently described him as the best tactician he had played under (MEN);

“He was tactically the best I have worked with – in terms of setting you up in a shape defensively and everyone knowing their roles.”

Angel Di Maria however, now of Paris Saint-Germain, threw the accusation that the Dutchman was responsible for his underwhelming stint in Manchester in the 2014/15 season (The Mirror);

I made a very good start and then I got injured. Things weren’t quite working for me and van Gaal changed my position. It’s difficult to adapt to van Gaal. I had a number of bust-ups with him.

After three years’ silence, van Gaal has now responded to Di Maria’s suggestion that he is the man to blame for the Argentine’s short, sorry spell with United, after having been brought in as the club’s £59.7million record-signing from Real Madrid;

"Di Maria says it was my problem. I played him in every attacking position. You can check that. He never convinced me in any of those positions. He could not deal with the continuous pressure on the ball in the Premier League. That was his problem.”

The jury is certainly still out, with van Gaal subsequently having decided to retire from management, and Di Maria kicking on magnificently in France.

With Les Parisiens, Di Maria is heading for double figures for league goals in every season (currently balancing on nine strikes with ten games remaining) and has had an involvement of 132 goals in 174 games across mainly - but not isolated to being - deployed on his favourite right-wing as part of a devastating attacking triptych.

From this position - in just over a century of games - Di Maria has scored 36 goals and provided a brilliant haul of 43 assists, producing a 78% goal involvement.

However, interestingly, the 32-year-old currently registers a record of scoring in 42% of matches for PSG when alternating on the left, and contributes an assist 40% of the time. Incredibly, he therefore has a goal involvement in 82% of all matches he plays for PSG in this position.

At Man Utd he only scored on four occasions, and the three in the Premier League all coming in the first five games, when he was playing on the left of a midfield three. Respectfully, his ten assists across the 2014/15 league season afforded him a joint-bronze position for the year’s best providers, and is still a record for an Argentine in a single campaign in the English top tier.

A hamstring injury suffered less than a quarter of an hour in a 3-0 home win over Hull City towards the end of November that saw him miss the majority of the festive season retrospectively seems to mark the beginning of his decline with United.

Di Maria’s full return at the beginning of the new year saw van Gaal’s rotation in his position come into full swing, with three of his next games seeing him operate as a Second Striker in a two-pronged attack, alongside fellow South American misfit Radamel Falcao.

Over his next fifteen league games, Di Maria played on the right-wing five times - each time operating in the same capacity in which he has once against proven himself at PSG - and yielded neither a goal of an assist.

Furthermore - with the resolution becoming all too apparent - Di Maria didn’t start a single league game after the beginning of March, failed to complete a full 90 minutes since the beginning of February, and didn’t score at all from the start of October.

Across the FA Cup five-game run - with United ultimately defeated at Old Trafford to Arsenal in the sixth round - Di Maria was forced to operate in four different roles, playing completely across the frontline.

The Sportsman
@TheSportsman
ðŸ‘€ Wayne Rooney on the best manager tactically he's worked with...
"Van Gaal was tactically the best I have worked with, in terms of setting you up in a shape defensively and everyone knowing their roles"
#MUFC 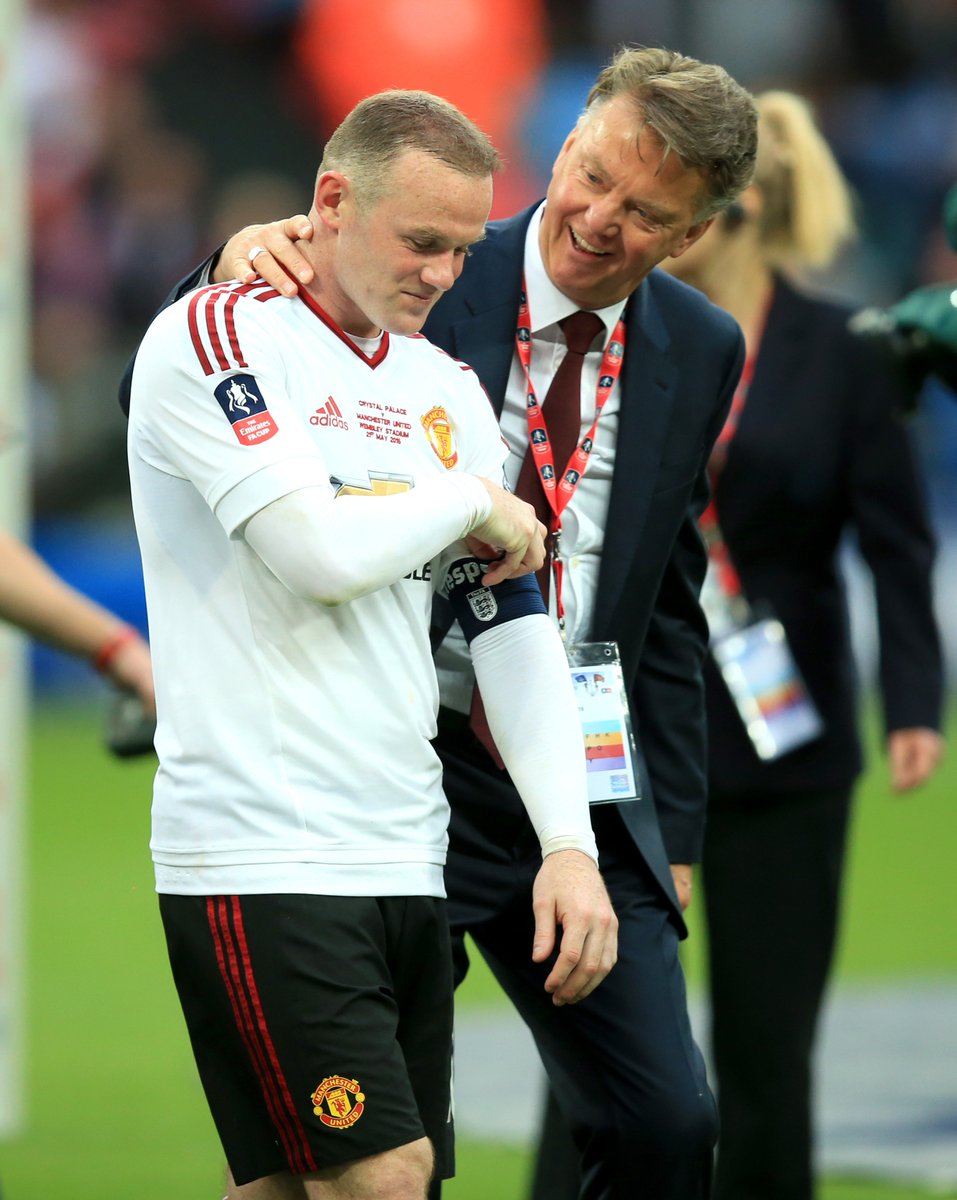 So what does this prove? Who was ultimately to blame for this failed experiment? The Nutty Professor, or the Guileful Guinea Pig?

Was it a matter of Di Maria descending into an inescapable Red rut, from which mental conditioning failed him, Louis van Gaal failing to make the most of his glaringly obvious talents, or even the failure of certain players around him to take advantage of his arsenal of skills, such as the aforementioned Falcao or the ageing Robin van Persie and Wayne Rooney?

Well, in the European Cup-winning coach’s defence, this season, for example, has seen PSG manager Thomas Tuchel playing Di Maria alternately in four forward positions in the league, and, significantly, slightly more on the left and as a second striker, where he has returned the most goals.

Ultimately, a player who commanded such a brobdingnagian fee to bring him to Old Trafford in the first place would be expected to have an adequate amount of versatility, as he has proven in France, and that has helped return two league titles, and eight additional trophies. 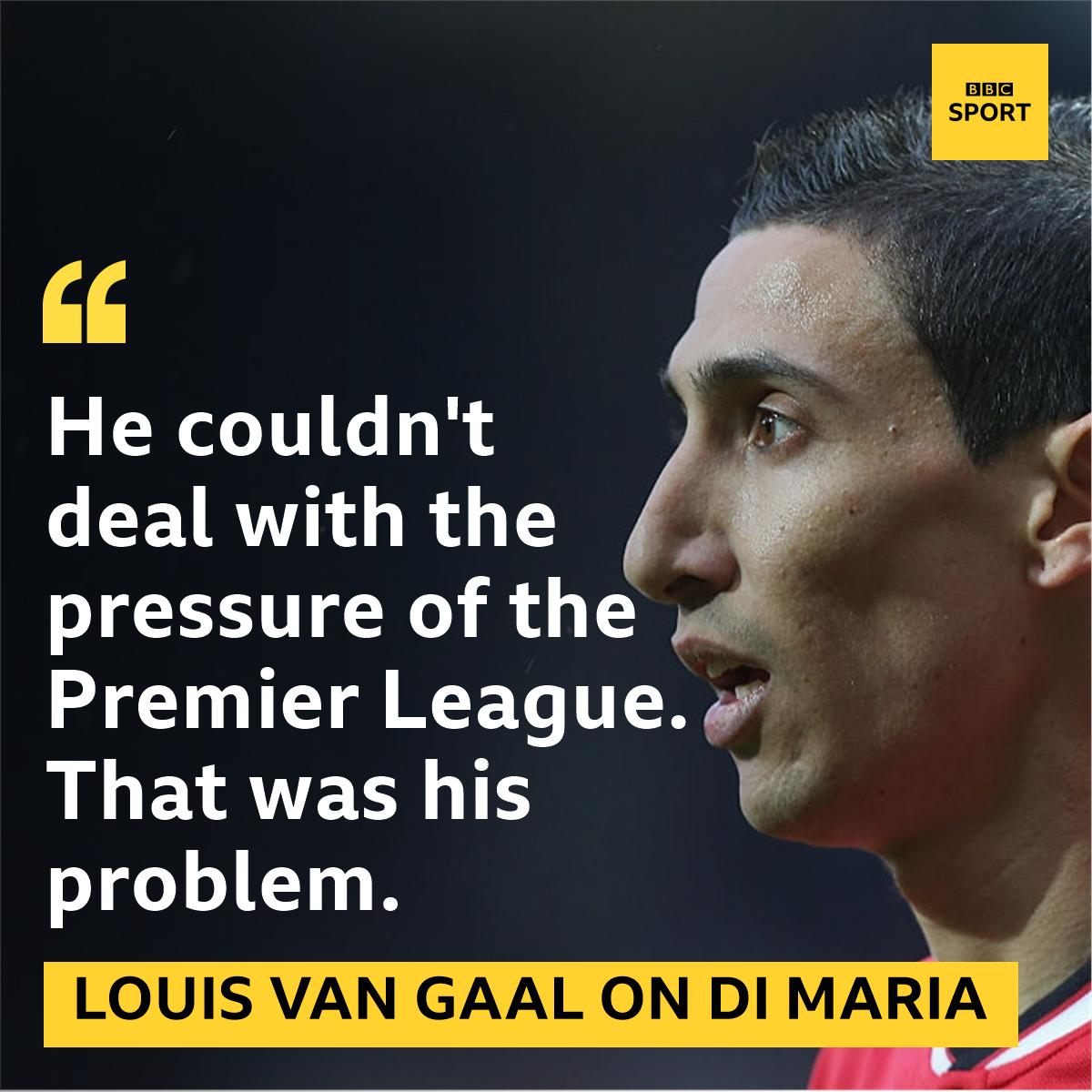 151
986
More
football
The Numbers That Prove The Women’s Super League Is The Best...
“We can say hand on heart we are the best league because we really are. All the best players want [ ... ]
football
Podcast Review - The Glenn Hoddle Footy Show
A quarter of a century since he last kicked a football professionally, and 14 years after his last coaching [ ... ]
football
Book Review - How To Run A Football Club: The Story Of Our National...
With an extended lockdown threatening the existence of a substantial portion of the United Kingdom’s [ ... ]
football
Thiago, Kalvin Phillips And The Premier League ‘Quarterbacks’...
Thanks for reaching out. You do the math. My bad. Americanisms, you gotta love ‘em. We’ve [ ... ]
football
Wayne Barton's Book On David Beckham Highlights Golden Balls'...
When historians look back at the sports scene at the turn of the millennium, there will most certainly [ ... ]
football
Rosé For Rodriguez, A Bollocking For Bilic, Five Stories You...
Managers can’t manage masks, fans are finding new ways to hail their heroes, and Jurgen Klopp [ ... ]
football
The Covid Defying Smart Helmet That Could Help Unite Football...
After the longest season in history, a mercifully short reprieve for players to catch their breath has [ ... ]
football
Get An Edge On Your Rivals This Season With The Fantasy Premier...
What are you this year? ‘Lallanas in Pyjamas’? ‘Murder on Zidane's Floor’? [ ... ]
football
Neymar's Handbags, Shy Guy Jose, And Other Football Stories...
Just like that, we’re back in the room. There’s new rules (on and off the pitch), and renewed [ ... ]
football
Celebrating The Return Of The Premier League With Its Best Ever...
After the shortest pre-season on record, even if it has felt to some of us like the longest ever, Premier [ ... ]
football
Lionel Messi Teams Up With Budweiser To Inspire Tomorrow's Footballing...
Lionel Messi, for all you do, this Bud’s for you. We’ve got to admit, it’s got a certain [ ... ]
football
From 007 to 46 Million Followers, Ten Facts You Never Knew About...
Everton finally announced the signing of James Rodriguez on Monday evening, after the Colombian superstar [ ... ]
football
The New Liverpool Book With A Groundbreaking View Of The Shankly...
September should always hold a special place in the hearts and minds of Liverpool Football Club and [ ... ]
football
The Questions We Want Answering After Watching All Or Nothing:...
“You have to be a bunch of bastards!” Annnd with that, we’re hooked. The last day [ ... ]
football
Football History Comes To Life With The Guardian’s Forgotten...
For much of 2020, the general consensus amongst the sporting community has seemingly been the desire [ ... ]
football
Book Review - Close Quarters: An Extraordinary Season On The...
He has been called the luckiest journalist in the world. When award-winning sportswriter Neil Harman [ ... ]
football
Work Out Like A Chelsea Player With The Most Advanced Football...
It claims to be the most advanced football training experience ever - imagine being trained by world-class [ ... ]
football
Blue Moon, Bubbles & Delilah - How Football Clubs Got Their...
Liverpool and Celtic fans both enjoy spine-tingling versions of ‘You’ll Never Walk Alone’ [ ... ]
football
The Lionesses Who Helped Lead The Charge In Lyon's Coupe De...
For the second time in less than a fortnight, Olympique Lyonnais and Paris Saint-Germain faced off in [ ... ]
football
Five Premier League New Boys That Are Set To Take Next Season...
A swift summer transfer window is on the cards, with just 48 days between Premier League seasons due [ ... ]
football
Bobby Robson And The Most Glittering Chapter In Ipswich Town’s...
Few in Ipswich could have predicted what was to come when Bobby Robson replaced Bill McGarry at the [ ... ]
football
How Tearing Down The Twin Towers Destroyed The Magic Of Wembley
On July 26, 1998, plans for a new Wembley were revealed to the world, promising a national stadium [ ... ]
football
Here's To The 2019/20 Premier League Season: Five Moments That...
It all began on August 9, 2019. 353 days later, a fortnight shy of a full entire year, the 28th Premier [ ... ]
football
Why Figo To Madrid Is Still Football's Most Controversial Transfer...
We’ve had Neymar, Sol Campbell and Carlos Tevez but on this day in 2000, Luis Figo completed the [ ... ]
football
Remembering Laurie Cunningham: The Football Pioneer Whose Legacy...
In 2016 the English Heritage scheme erected a blue plaque in Stroud Green, North London to celebrate [ ... ]
football
Book Review - King Eric: Portrait Of The Artist Who Changed...
Leeds. Irwin. £1million. Title. Double. Palace. Kick. Ban. Seagulls. Return. Liverpool. Double. [ ... ]
football
Replacing Rapinoe And Morgan? The Ladies Who Can Light Up The...
Write off 2020. The best thing about it is remembering how good 2019 actually was. One of the undeniable [ ... ]
football
Wembley Woe: When England Lost To Germany At Euro ‘96
In the summer of 1990 England tasted their first ever penalty shootout heartbreak when they went out [ ... ]
football
Get Ready For A Nostalgia-Fest With Italia '90 Podcast Vincerà!
Hosted by Mark Godfrey and running from June 8th to July 8th, Vincerà! is a 24-part podcast series [ ... ]
football
Harry's Heroes, Vinnie Jones And Revenge At The Battle Of San...
When Vinnie Jones started crunching San Marino players left, right and centre, it was clear the friendly [ ... ]