Keita Balde Diao ended last season as one of the most in-form players in Serie A. The Senegalese international scored seven goals in four games over the final part of the 2016/17 campaign, including a brace in a 3-1 victory over derby rivals Roma. 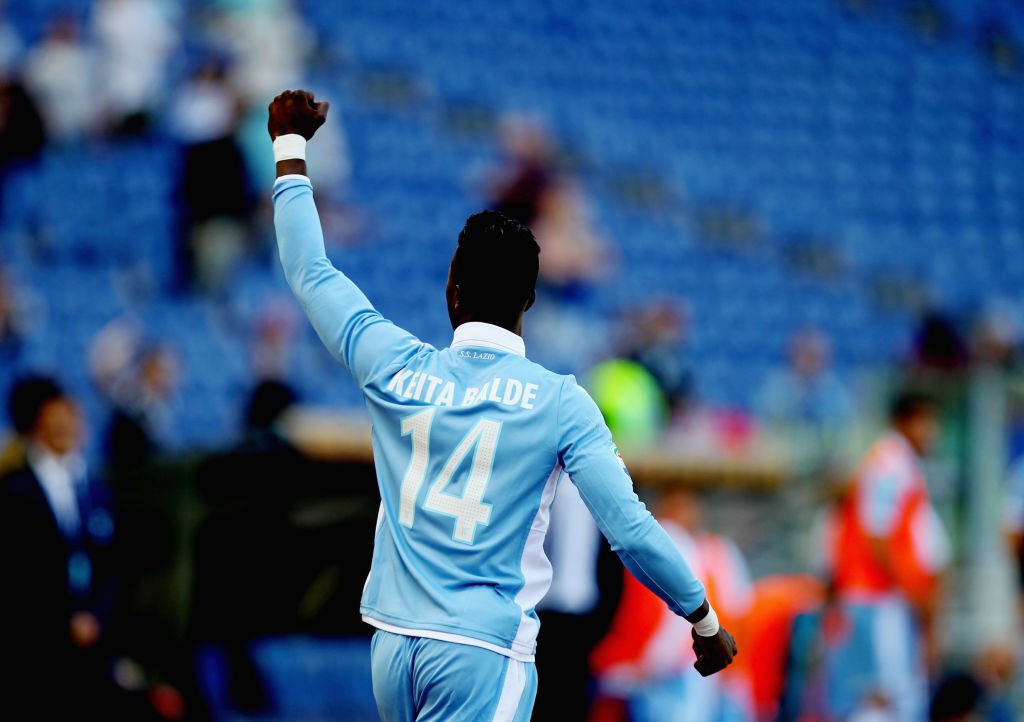 It appears as though those happy days playing for Lazio are now over though, with the 22-year-old making no secret of the fact that he wants a move away from the capital before the end of the current transfer window. Juventus have always been his preferred destination, but this morning Italian newspaper Corriere dello Sport claimed that Tottenham Hotspur had made a €30 million bid for the talented forward. 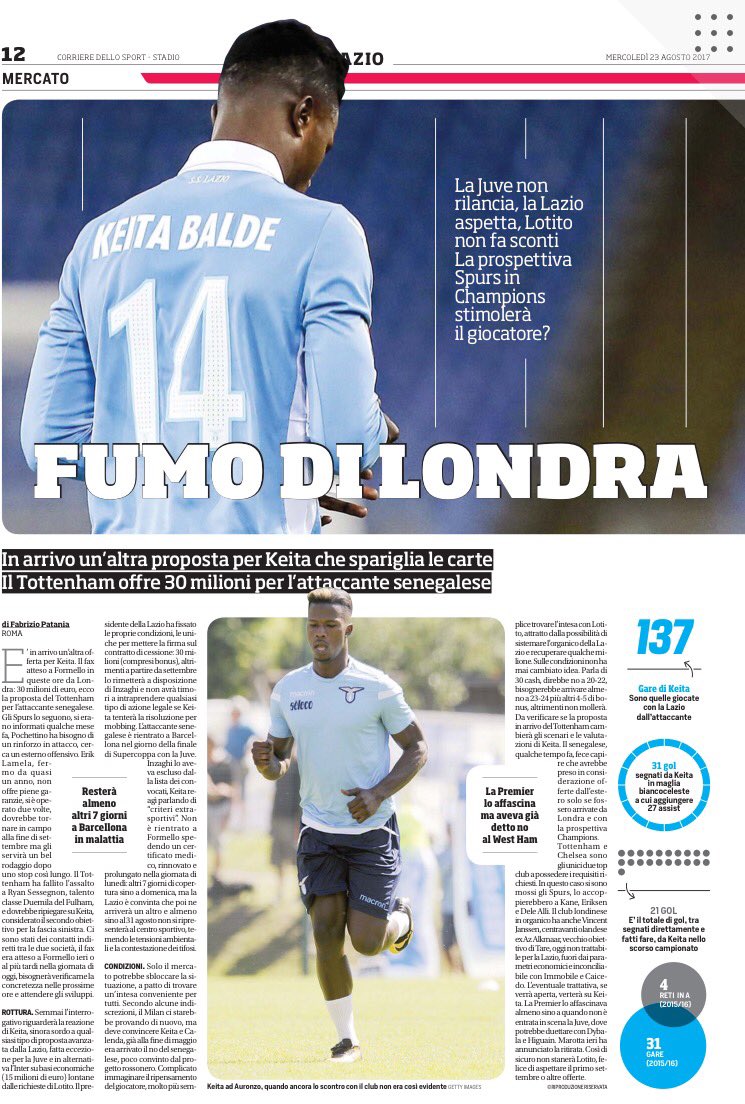 So could Keita be on the way to London? It all depends on what the player wants. The current situation is that the player has handed in a medical certificate, reports in the Italian press suggesting that he had cited “psychological discomfort” as the reason why he has been refusing to train. After bids from Milan, West Ham and Napoli, Lazio president Claudio Lotito accused the player of “extortion” in a recent interview with La Gazzetta dello Sport: “There were three formal offers, all of them I can prove with documentation. Milan would have given us €35m, West Ham €32m and Napoli €30m. Keita and his agent replied they were not interested in any of the three, that the destination they wanted was Juventus.

“The Bianconeri consider €15m to be a suitable offer, but I cannot sell a player for half of the lowest other offer I received. If I got proposals worth €30m, why should I sell him for half that? You tell me his contract is running down and I risk losing him for nothing if I don’t accept? Well I say that is extortion and practically qualifies as a crime.”

Question marks over the youngster’s attitude have been raised before, the former Barcelona youth product having gone AWOL from pre-season training last summer after demanding a transfer. Tottenham are the latest side to offer in excess of €30m for the player and – should he choose to accept this time – the London club would be receiving a young star of immense quality.

His 16 goals last term was the highest tally in the league among any player under the age of 23, his cool head in front of goal showing a level of talent above and beyond other forwards in the same bracket. Indeed Keita had the second-highest conversion rate (32%) in Serie A last term among players who had achieved a tally that was in double figures.

In just 21 starts, the Lazio man created 43 chances and completed 53 take-ons, becoming a key player as Simone Inzaghi’s side enjoyed a fruitful campaign. The Aquile did much better than was predicted from the outset last summer, securing a Europa League berth in 5th position in addition to a Coppa Italia final appearance.

Even though the player has been pushing so hard for Juventus, Spurs may have a chance here. Bianconeri Director General Beppe Marotta has declared the club out of the race, hinting at the fact the off-field issues with the player may have been a factor in the decision.

“Keita is an opportunity that, for contractual conditions and age, all clubs must at least try to take, with all due respect for Claudio Lotito and Lazio,” he told Ansa. “Emre Can and Adrien Rabiot are also players whose contracts expire in 2018, like Keita, but they play regularly for their teams without any drama. We made an offer to Lotito that we consider to be fair, but only he is able to decide strategies at his own club and so we have withdrawn.”

Whether Keita wants a move to the Premier League remains to be seen, but the window of opportunity for Tottenham is open and – if they can create the right conditions for him – a gamble for Keita Balde is one worth taking.

x
Suggested Searches:
The Sportsman
Manchester United
Liverpool
Manchester City
Premier League
More
football
Ryan Reynolds, Rob McElhenney And Football's History With Celebrities
Marvel’s Deadpool and that guy from the sitcom your roommate won’t shut up about have taken [ ... ]
football
Vinnie Jones Handling Paul Gascoigne And Other Great Footballing...
It's one of the most well-known images ever snapped on a football field. Paul Gascoigne's face [ ... ]
football
Marsching Orders: Jesse Marsch Sacked By Leeds But Certain Problems...
Leeds United have parted company with head coach Jesse Marsch. The decision to remove Marsch on [ ... ]
football
Brentford Disrupting Top 10 Balance Should Come As No Surprise
It’s brilliant when a plan comes together, and that is just what is happening at Brentford [ ... ]
football
On This Day In 1958: Munich Air Disaster Decimates Man United’s...
On February 6, 1958 a BEA Airspeed AS-57 Ambassador skidded on take-off at Munich’s Riem Airport, [ ... ]
football
A Night To Remember For Harry Kane As Tottenham Hotspur Outclass...
It was a night to remember for Harry Kane and Tottenham Hotspur as the forward’s match-winning [ ... ]
football
Brennan Johnson And Keylor Navas Secure A Vital Victory For...
A sweet Brennan Johnson volley saw Nottingham Forest beat Leeds United 1-0 at the City Ground on Sunday [ ... ]
football
Lauren James' Brilliant Solo Goal Caps Off Valuable Win For...
A stunning solo goal from Lauren James capped off a brilliant performance as Chelsea defeated rivals [ ... ]
football
Joao Cancelo's Departure Is Only Surprising If You Don't Know...
In a transfer window where the British transfer record was broken, Manchester United actually did their [ ... ]
football
Peter Taylor: The Football Genius Behind Brian Clough's Success...
As Nottingham Forest host Leeds United in the Premier League this weekend, thoughts will inevitably [ ... ]
football
Bright Anthony Gordon And An EFL Cup Final Give Eddie Howe Reasons...
A 1-1 draw with relegation battlers West Ham United is not what Newcastle United manager Eddie Howe [ ... ]
football
The Sean Dyche Era Dawns With An Everton Win Over League Leaders...
There’s new manager bounce and then there’s this. An Everton team that has not won in their [ ... ]
football
Can Sunderland Secure A Double Promotion Or Will Stewart's Absence...
Famous American comedian Groucho Marx once sarcastically quipped “a black cat crossing your path [ ... ]
football
Turn The Page: Is Jurgen Klopp In The Middle Of A Slump Or A...
There are two ways one can look at Jurgen Klopp as he endures his most difficult moments since those [ ... ]
football
Chelsea's Season Depends On Cohesion After Disjointed Draw With...
Fresh from a week in which they broke the British transfer record on Enzo Fernandez, their eighty signing [ ... ]
football
Everton Have Put Sean Dyche In An Impossible Position With His...
The end of the January transfer window is possibly one of the worst times you can take over as the manager [ ... ]
football
De Zerbi For PM: Brighton Boss Has Skills That Would Put Our...
It is such a shame Roberto De Zerbi is Italian. Otherwise there would be a genuine case for Brighton [ ... ]
football
Robert Earnshaw Says Graham Potter Has Difficult Task To Keep...
Former Premier League striker Robert Earnshaw believes Graham Potter has a huge task on his hands to [ ... ]
football
Eddie Howe Channelling Diego Simeone With Newcastle's Antics...
Newcastle United are continually evolving under the leadership of Eddie Howe and have undergone an [ ... ]
football
Mudryk, Felix, Fernandez: What Is Chelsea's Best XI Under Graham...
Graham Potter must be feeling like Augustus Gloop in Charlie and the Chocolate Factory. Just when you [ ... ]
football
Folarin Balogun's Fine Form For Reims Will Be A Huge Boost For...
Folarin Balogun moved ahead of Kylian Mbappe as the Ligue 1 top scorer by netting a hat-trick in [ ... ]
football
Fantasy Premier League Gameweek 22: Hidden Gems From The January...
It might feel like yesterday but it has been two weeks since the last Premier League matches! With the [ ... ]
football
Sabitzer Signing Shows Man Utd Are Smarter As They Ease Into...
Manchester United have reached their first domestic cup final since 2018. After triumphing 2-0 over [ ... ]
football
The Return Of Deadline Day: Boehly's Trolley Dash, United's...
It had all started to get a bit sad. The excitement of deadline day was a collective, yellow-tied delusion [ ... ]
football
Champions Next Year? The Key Role The League Cup Has Played...
Barring a complete and utter disaster at Old Trafford, Manchester United will compete in the Carabao [ ... ]
football
Special Relationship: Jorginho Is The Latest To Move Between...
Everyone in football knows that you shouldn’t strengthen your rivals. Whether it be localised [ ... ]
football
The Sportsman's Football Power Rankings: Liverpool Slump Dumps...
Everyone's back off their winter holidays now and all hell has broken loose. European champs Real [ ... ]
football
Local Hero Sean Longstaff Sends Newcastle United To First Major...
‘Tell me ma, me ma, I won’t be home for tea, we’re going to Wembley’  St [ ... ]
football
Tony Pulis: The 'Old School' Manager Who Ripped Up The Premier...
‘Yeah, but can he do it on a cold Tuesday night at Stoke City?’ Never has one manager given [ ... ]
football
Alessia Russo And The Window Into The Future Of Women's Football...
As ever, a big transfer bid has stolen the headlines on January 31. It’s been a fair while since [ ... ]