Mma
News
'Notorious' is talking up a fight with Charles Oliveira that his recent form doesn't warrant, and he might not need
Joey Mills
10:35, 07 Jan 2022

Conor McGregor has targeted an Octagon return, as he looks to fight for the first time since breaking his leg last summer. ‘Notorious’ returns to a strange, unfamiliar landscape in the world of combat sports. Having lost his last two fights, the Irishman is no longer considered one of the world’s best. The rise of Jake Paul and the celebrity boxing phenomenon has also altered McGregor’s reality, as the influencer has usurped his position as the most controversial fighter on the planet. There was a time when this was Conor McGregor’s world, but now the 33-year-old is just living in it.

Never one to do things by halves, the proprietor of Proper No.12 whiskey has called out UFC Lightweight Champion Charles Oliveira. The fight would make financial sense, with McGregor being the biggest pay-per-view draw in UFC history. Understandably Oliveira is keen. But MMA differs from boxing in how it chooses its title fights, and McGregor is only ranked ninth in the UFC lightweight rankings. The former two-weight world champion has also won just one fight since 2016. While a McGregor vs Oliveira showdown would do monster business at the box office, it would undermine the company’s ranking system to allow it to happen.

This has not deterred McGregor from trying to will the match-up into existence. When Oliveira posted a picture of himself posing alongside footballer Neymar, McGregor took it with his usual grace and humility. Just kidding, the Irishman called out Neymar too, threatening to “smoke” the Paris Saint-Germain forward. While this was no doubt just for show, a classic McGregor PR move, it does hint towards a gravy train the ‘Notorious’ one has missed in recent years.

Conor’s 2017 cross-codes clash with boxer Floyd Mayweather was a PPV juggernaut, and dominated fight discussions for almost an entire year. McGregor put up a creditable effort in the showpiece but the sporting merits were almost secondary. What that bout proved was that people were happy to pay to watch non-boxers compete in the squared circle, as long as the hype was strong. McGregor teased that there would be more for him in the wider world of combat entertainment. He teased a fight with Manny Pacquiao that ultimately never took place. There were also persistent rumours of a turn in WWE, which also never came to fruition. 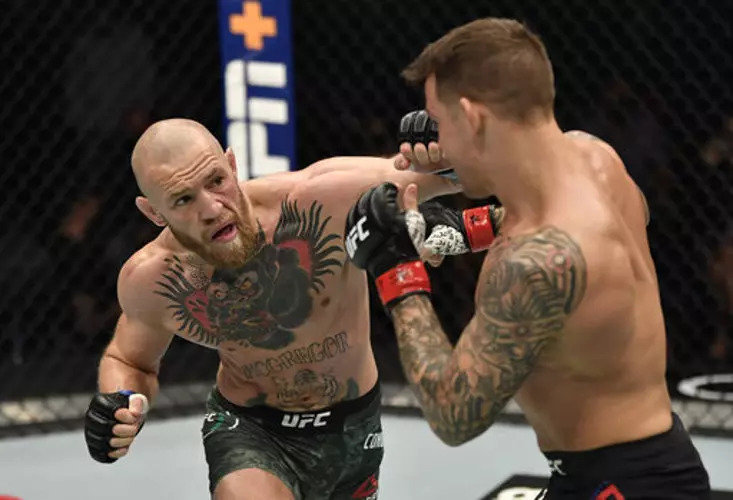 Instead, McGregor was usurped on both counts. Heavyweight champion Tyson Fury got to a WWE ring before him, filling the quota for controversial athletes from legitimate sports in that arena. The YouTube community descended upon the celebrity boxing idea McGregor popularised with Mayweather, as Logan Paul, brother Jake and KSI began settling social media disputes in the ring.

That cottage industry has now grown to the point that some casual observers actually think of Jake Paul as a legitimate boxer, despite his 5-0 record coming against YouTubers, basketball players and retired UFC fighters. The competition element isn’t important, the money and the clout are king. These are two things Conor McGregor holds dear, but he seems to have missed the boat. While his old rival Mayweather saw the lay of the land, and ended up earning millions for a gentle spar with Logan Paul, Conor has been slower on the uptake.

It is strange to see a lukewarm McGregor sat behind the curve, watching idle as a generation he influenced with his cocksure charisma and wealth-obsessed character steals his old spotlight. There are ways back for the 22-6 star. The road towards UFC legitimacy might be the hardest. McGregor has lost three of his last four fights, and it feels like the sport is moving on without him at least inside the Octagon, though his name will always carry considerable financial success.

Joining the celebrity boxing circus might actually be the way back. When McGregor is in the news these days, it is rarely for challenging his fellow fighters. ‘Notorious’ makes headlines when he calls out Neymar, brawls with Machine Gun Kelly or comments on the activities of a Paul brother. Ripping a page out of Jake’s playbook and contesting a series of wisely-chosen, carefully-marketed clashes with social media stars, celebrities or out-of-their-depth athletes could see McGregor breaking PPV records well into his forties.

How McGregor approaches this crossroads will say a lot about the man who became the first fighter to hold UFC titles in two separate divisions simultaneously. Should he choose to forge ahead in the Octagon, his skills will be tested like never before, particularly against Oliveira. If McGregor really is on the wane as a fighter, he risks being brutally exposed. If he’s victorious, he joins the conversation as one of MMA’s modern greats. The road paved by Jake Paul brings no such legitimacy, but will ensure McGregor’s name is never out of the headlines, and his bank balance is never less than astronomical. For a certain set of enthusiasts, McGregor vs either Jake or Logan is their dream fight. Catering to this subset could be the wisest course of action. Fighter or superstar? It’s time for Conor McGregor to make a big decision.

x
Suggested Searches:
Manchester United
Liverpool
Manchester City
Marcus Rashford
Premier League
More
mma
Gilbert Burns Is Back And Looking To End Kamaru Usman's Unbeaten...
The UFC’s efforts to ensure events remain watchable throughout the Covid-19 pandemic are set to [ ... ]
mma
The Diet Plan McGregor Is Using To Ensure He’s Fighting Fit...
Conor McGregor returns to the Octagon this weekend when he takes on Dustin Poirier for the second time [ ... ]
mma
At £330,000, Ronda Rousey Is The Highest Earning MMA Fighter...
It’s been a long time coming and the only person more prepared than the fans is the man himself [ ... ]
mma
Talented, Tough And Charitable, Who Is Conor’s UFC 257 Opponent...
All eyes will be on Conor McGregor this weekend as he makes his return to the Octagon after another [ ... ]
mma
Michael Bisping’s Believe You Me Is The Perfect Pod To Satisfy...
With nearly 300 episodes to currently demolish, this is the podcast to satisfy your MMA munchies.  [ ... ]
mma
The UFC Needs Paige VanZant's Instagram Followers More Than...
It was over almost before it began. Eighteen months of waiting culminated in a dominant Amanda Ribas [ ... ]
mma
Sanitised Violence: When Cage Warriors Went Behind Closed Doors
Just before UK lockdown began, top European MMA promotion Cage Warriors took place in a hauntingly deserted [ ... ]
mma
''Best Shape I've Ever Seen Him'' - Conor McGregor Bringing...
The wait is almost over as Conor McGregor makes the final preparations for his return to the Octagon [ ... ]
mma
From The Greatest To The Fiercest, UFC 245 Promises A Night...
Let’s take stock for a second. 2019 has delivered some blistering moments. Who can forget Jorge [ ... ]
mma
Hungry And Focused, It's The New Improved Conor McGregor
Conor McGregor’s striking coach, Owen Roddy, insists his fighter “has that hunger again” [ ... ]
mma
''Focused'' Conor McGregor Announces His Octagon Return In 2020
Conor McGregor has come out of MMA retirement and announced his return to UFC at the start of next year. [ ... ]
mma
From Flanker To Fighter: James Haskell Talks To TheSportsman...
Former England rugby star James Haskell announced last week that he'll be swapping his scrum cap [ ... ]
mma
His Three Most Notorious Moments Inside The Octagon As Conor...
The former UFC featherweight and lightweight champion Conor McGregor has announced his retirement [ ... ]
mma
Tenshin Nasukawa Unleashes Amazing Capoeira Kick To Bounce Back...
The defeat to Floyd Mayweather in a farcical exhibition big-money boxing match on the last New [ ... ]
mma
#Bellator216: Michael Page Outpoints Paul Daley In Disappointing...
Michael ‘Venom’ Page outpointed long standing rival Paul Daley at the Mohegan Sun Arena [ ... ]
mma
#Bellator216: MVP And Daley Set For All-British Brawl In Connecticut
The biggest domestic UK MMA fight of all time goes down this Saturday evening… in Connecticut, [ ... ]
mma
Aaron Chalmers Suffers Shock Defeat In Hometown Bellator Newcastle
Bellator kicked off their European Series in Newcastle with a bang, with an incredible twelve finishes [ ... ]
mma
Aaron Chalmers Aims To Please As Bellator Heads To Newcastle
Aaron Chalmers bids to move to a perfect 5-0 record as a mixed martial artist in his hometown, as he [ ... ]
mma
Conor McGregor 'Clone' - German MMA Fighter Emulates His Hero...
If you are going to model yourself on UFC Legend Conor McGregor then you better be able to deliver the [ ... ]
mma
Conor Mcgregor And Khabib Nurmagomedov Slapped With Hefty Bans...
Conor Mcgregor And Khabib Nurmagomedov have both been banned for their parts in the mass brawl that [ ... ]
mma
Tenshin Nasukawa Responds To Conor McGregor Calling Him Out
The Japanese martial artist Tenshin Nasukawa has seemingly not allowed his confidence to be knocked [ ... ]
mma
Celtic Gladiator 22: Brendan Loughnane And Kane Mousah Headline...
European mixed martial arts show Celtic Gladiator return to Manchester on Friday night for the second [ ... ]
mma
Horrendous Scenes As MMA Fighter Dislocates His Knee Whilst...
Not what you want to see on a Sunday morning but here we go anyway. As we know, MMA is probably the [ ... ]
mma
Yair Rodriguez Stuns Chan Sung Jung With Last Second Knockout...
Yair Rodriguez produced a sickening elbow to the face of Chan Sung Jung in the last second of their [ ... ]
mma
Conor McGregor Inspires Dallas Cowboys To Victory And Claims...
Conor McGregor bounced back from his defeat to Khabib Nurmagomedov by watching the Dallas Cowboys beat [ ... ]
mma
Conor McGregor's Top 5 Knockouts
The return of Conor McGregor to the octagon after an extended… sabbatical will redraw the collective [ ... ]
mma
Korean Taekwondo Team Dazzle Audience With Action Packed Display
It’s over ladies and gentleman. If you’re thinking about taking up Taekwondo, or looking [ ... ]
mma
Ultimate Fighter 27 Finale Is Perfect Prelude To UFC 226!
The Ultimate Fighter Season 27 draws to a close as the perfect warm-up act for the hotly anticipated [ ... ]
mma
Aaron Chalmers' First Bellator Bout Sees The Ex-Geordie Shore...
On Friday night, MMA fighter Aaron Chalmers sensationally won his bout with Ash Griffiths by technical [ ... ]
mma
UFC Atlantic City: Kevin Lee Misses Weight, Main Event Still...
The octagon returns to Atlantic City, New Jersey for the first time in nearly four years with the promotion [ ... ]