It wasn’t pretty, but Manchester City are into the final four of the Champions League after a chaotic 0-0 draw with Atletico Madrid at the Wanda Metropolitano. Pep Guardiola’s side had to keep their heads and dig deep as Diego Simeone and his troops aggressively attempted to disrupt their gameplan.

Atletico were labelled ‘disgraceful’ by Rio Ferdinand at full-time as Felipe was sent off and Stefan Savic should have seen red after a headbutt, while Kevin De Bruyne and Kyle Walker were both forced off with injuries in the second half.

Those injuries will cause concern for Guardiola moving into a key period of the season, while Phil Foden was clattered by Felipe in an aerial challenge that left him with a gashed head and in need of a headband. This was a battle and it showed a completely different side to City.

So known for their passing play, this time they had to be resolute in the fiercest of environments. Savic caused more commotion in the tunnel at full-time as he reportedly wrestled with Jack Grealish, who didn’t even play in Madrid.

On the pitch, it seemed the action was secondary, but there were a few moments of quality. On the half hour mark, Man City finally carved the hosts open. Riyad Mahrez slid the ball across the box and it came to Foden, who teed up Ilkay Gundogan, but the German could only find the post with his initial effort, before his follow-up header was blocked.

In truth that was the only major chance that the first period yielded as Atleti’s combative style once again frustrated Guardiola’s side. But this time, City didn’t need to score, they just needed to keep a clean sheet to progress.

If more proof was needed that these two teams are two different sides of the same coin, desperate to win their first Champions League trophy via vastly different methods, this was it.

Half-time came and went and Diego Simeone’s side began to go on the offensive. Antoine Griezmann had his shot deflected wide by Aymeric Laporte early on as the hosts ventured forward for the first time in the tie.

Manchester City
@ManCity
What a performance! 💪💙 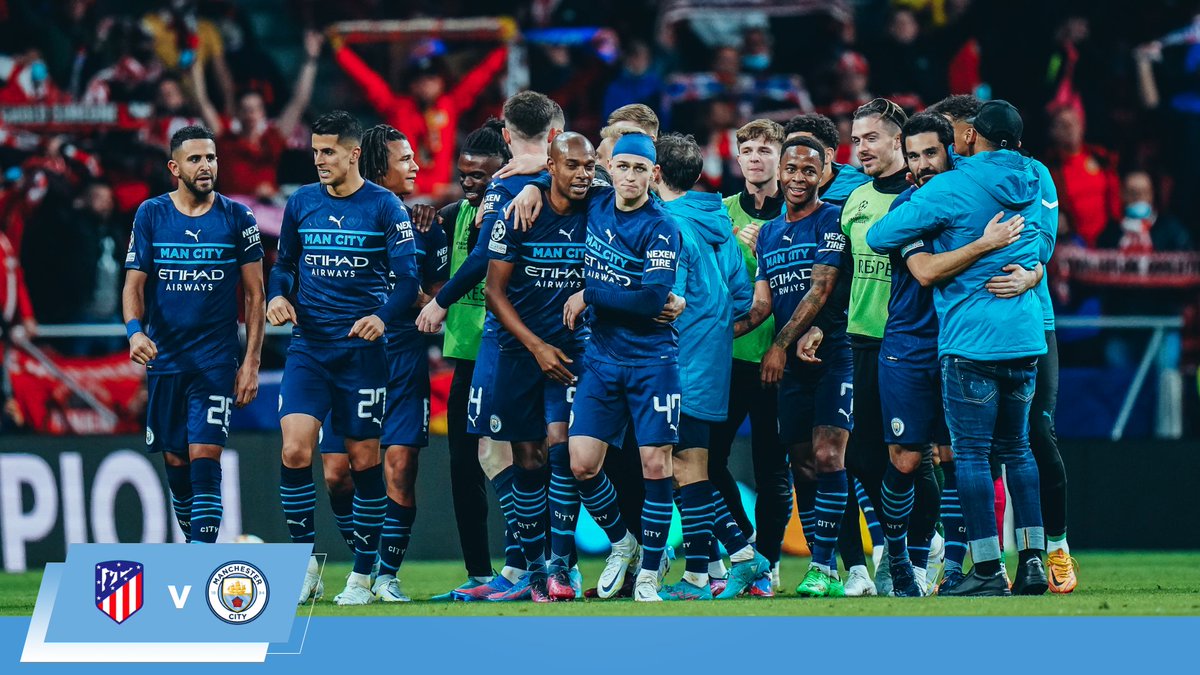 Griezmann’s half-volley from the edge of the box just curled past the post but the link-up play between the front two was beginning to cause Ciy problems. They were direct, they were intense, and the Wanda Metropolitano roared its approval as Atleti bared their teeth.

Worryingly for City, De Bruyne went off when he looked like he had tweaked something, and while Raheem Sterling was introduced as an attacking change, the Belgian may miss the FA Cup semi-final with Liverpool at the weekend.

The hosts made changes of their own and one of them, instantly Rodrigo de Paul curled one over the bar. Walker was clattered as he cleared the ball, and that collision gave him an injury that he also couldn’t continue with.

Foden was fouled again in the 89th minute and Savic was left enraged as he attempted to drag him to his feet, and sparked a brawl in the process. That resulted in a second yellow card for Felipe, who fouled the English youngster for both cards, while Savic should have seen red for a headbutt.

That ending, along with nine added minutes, summed up the way Atletico approached this tie. They attempted to rough up the English champions and in doing so, ended up a man down. City almost won the game on the night as Jan Oblak denied Gundogan from close range before Ederson denied Correa in the dying seconds to take the visitors through.

City have progressed to the semi-finals again, but despite winning this tie, they may count the long-term cost of injuries to Kevin De Bruyne and Kyle Walker.