The Last Great Race on Earth. That’s how the Iditarod Trail Sled Dog Race bills itself and it’s not going to let a little thing like the world’s worst pandemic in a century hinder it.

Taking place in the USA’s largest state, Alaska, mushers and their huskies began their frantic trek after leaving the starting line on Sunday 8 March 2020. The course travels from the largest city Anchorage, west to Nome, a city that has a population of less than 4000 people, on the southern Seward Peninsula on the coast of the Bering Sea.

It covers the distance of a gargantuan 1000 miles, "of the roughest, most beautiful terrain Mother Nature has to offer," in The Last Frontier. In the space of around nine days, this means the dogs pulling the sleds have to run close to 100 miles every single day.

People from a variety of backgrounds and nationalities compete annually, through temperatures breaking well past freezing point and visibility that would make you wish you were blind. As the official website likes to describe it "it’s not just a sled dog race, it’s a race in which unique men and women compete". Using a historically important route used by Native Americans, the Iditarod Trail Sled Dog Race was founded in 1973, with the "Golden Harness" awarded to the dog decided by a vote of the mushers, who have to avoid such dangers as the devastating weather, but also moose attacks.

For the 2020 event just over a week in there are 56 mushers currently participating, with five already having withdrawn. The race leaders are - as of Monday 16 March - currently at Checkpoint Unalakleet, the first marker on the Bering Sea, with six more remaining. Norwegian Thomas Waerner was the first to hit the coastal checkpoint at 10:08am (AKDT / GMT-8) on Sunday 15 March and received $2000 in gold nuggets as a reward. The remaining part of the race takes place across 250 miles, along the Yukon River.

Though the race itself has so far been unaffected, aside from a few checkpoints being repositioned, unfortunately the extra events surrounding the race have been cancelled amid the coronavirus outbreak, including the 'Meet the Mushers' event that was due to take place on March 21. Fans are also urged not to wait to congratulate the racers at the finish life.

Jeff Schultz
@IditarodJeff
Salmon - it's what's for breakfast! A Fabio Berlusconi dog eats his breakfast under a blanket in the morning at the Takotna Checkpoint on Wednesday March 12th during the 2020 Iditarod Trail Sled Dog Race.
#Iditarod #Iditarod2020 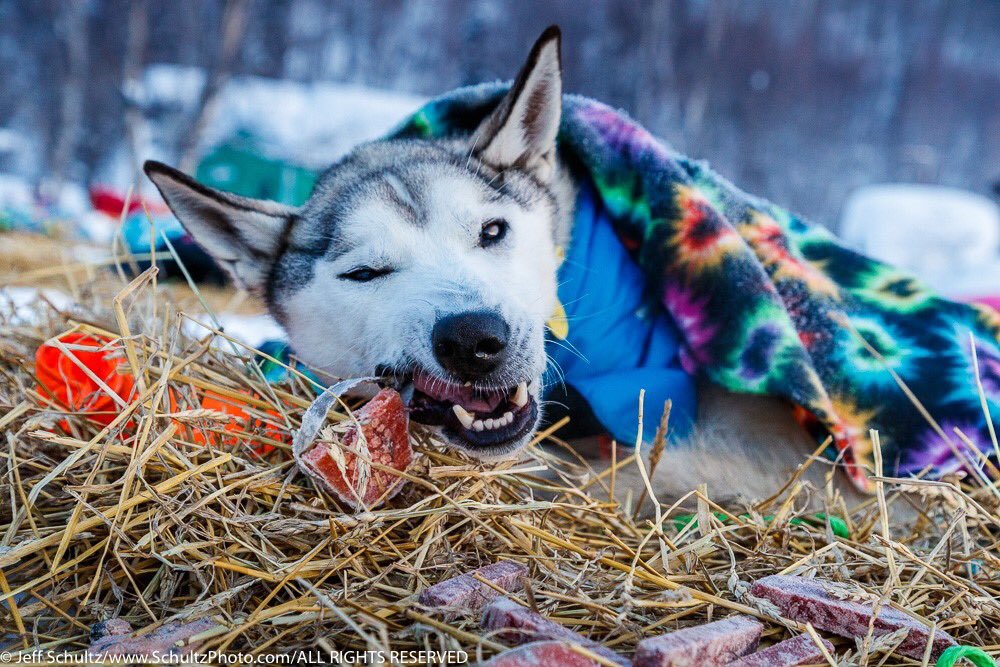 “We have been taking the normal precautions that everyone should be taking,” race marshal Mark Nordman told the Anchorage Daily News on Friday, “Pretty much we’re telling everybody not to go to Nome unless they are essential race personnel.”

Proceeding with the race whilst the concern of the spread of the coronavirus perpetuates isn’t the race’s only controversy. There are perpetual accusations of animal cruelty, with an average of two to three dogs dying ever single year in running for the Iditarod, whilst there is further speculation of the culling of canines who can’t reach standard by trainers (PETA).

The race has also become seen to commentate the famous 1925 ‘Great Race of Mercy’ where a dog sled team ran to the rescue of Nome, the city blighted by diphtheria for an imperative delivery of the necessary antitoxin. As the coronavirus continues to affect life as we know it, and hit the world of sport, it’s quite appropriate that an event that has its origins in delivering respite is still persevering.