Football
News
Pep and City were deservedly beaten by Chelsea in the Champions League final
Kris Voakes
08:55, 30 May 2021

It is never as easy as just throwing the best 11 players out on the pitch. It never has been. Football management is a difficult, difficult business. It’s just that Pep Guardiola has often made it look incredibly easy.

In 12 seasons as a senior manager, the Catalan coach has won 31 trophies, including nine league titles and two Champions League crowns. Winning has come naturally to him. He’s even enjoying a period with Manchester City the like of which the club has never known, with three Premier League wins in four years, one of them with 100 points on the board and the most recent including an incredible 21 successive victories in all competitions.

But it is now 10 years since the last of those continental triumphs with Barcelona, and Guardiola will be left thinking long and hard about some of the decisions he made as his City side failed to win their first ever European Cup against Chelsea on Saturday.

Because while Pep can make things look really easy, he has also developed a habit for making things harder than they need to be. And ahead of the biggest game in City’s European history, Guardiola made the decision to forego a defensive midfielder as well as playing without a centre forward in a move which backfired in a monumental way.

He has been the biggest advocate in football for the ‘false nine’, using his energetic, multi-talented attacking midfield line to pull defenders out of position and exploit the space they leave behind. Yet the thought process which led to him going without either of Fernandinho and Rodri at the heart of midfield will take some explaining. It was a tactic which left City rudderless. 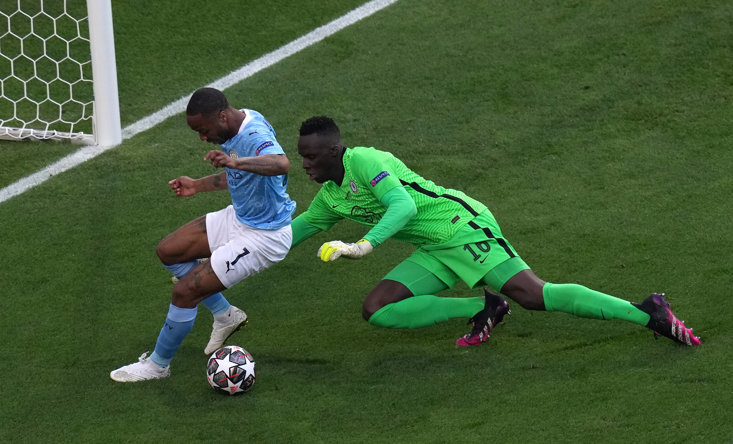 THE SELECTION OF STERLING DIDN'T PAY OFF FOR GUARDIOLA

Where normally they can dictate the pace and flow of a game, dominating the possession and tempo in equal measure, they had no such control at any point in their 1-0 defeat in Porto. For the crucial goal, Mason Mount picked up the ball on the halfway line and there was no player in a City shirt whose instinct was to immediately read the ball through the centre that was about to tee up Kai Havertz.

When 1-0 down there was nobody probing. Raheem Sterling, selected despite a poor run of form and at the expense of that vital holding playmaker, was ineffective out wide. From midfield the ball was lost too easily, the runs being made in the final third were either missed or not met with the quality of pass with the necessary timing. This was not City. This was not Guardiola.

Only it was Guardiola. He has made changes in formation for big games before, particularly in Europe, whether with Barcelona against Chelsea in 2012 or with Bayern Munich against Barca three years later. Then, as now, they didn’t pay off.

“I did what is best for the team,” was his rather curt response when asked by BT Sport after the match whether going without Rodri and Fernandinho was the right move. Clearly he wasn’t ready to go into the exact thought process, but it won’t be the last time he’s asked about it.

Had he just sat his City side down in the run-up to Saturday night and said “Same again, lads” it still might not have led them to a first Champions League title. But one can’t help but shake the feeling that they would have felt far more comfortable on the biggest night of their lives if they had gone with what they knew so well.

Instead, Guardiola will spend another year fighting off questions about the big-game rethinks that have undermined his quest for further European success.