Football
News
The future's looking bright for the Blackpool faithful once again after their side beat Lincoln City 2-1 at Wembley
Conor Keane
17:15, 30 May 2021

Blackpool secured their return to the second-tier for the first time in six years thanks to two exquisite strikes from Kenny Dougall.

The Australian, released by Barnsley last summer, was the star man for the Seasiders who were able to shake off their turbulent start after the Tangerines were a goal down within the first minute.

Blackpool’s triumph was more than deserved for a fanbase who had suffered under the stewardship of the Oyston family. They had to endure court cases, two relegations and the fans were fighting back against those ruining the soul of their community. There were protests and mass boycotts to send a clear message to the Oystons’ that they were no longer welcome at Bloomfield Road.

After years of persevering, the Blackpool faithful reached their endgame. The club was sold to current owner Simon Sadler in 2019 and the club hasn't looked back since. There is such a positive atmosphere around the club now and the dark skies of the Oyston era have finally faded away. Do not forget it was only 10 years ago that the club were in the Premier League and could have had a more fruitful decade had the club been released from the Oystons’ clutches sooner.

With the club now looking forward to Championship football for the first time since 2015, the fans can be positive. Under a healthy board, a good manager in Neil Critchley and a hungry group of players, the club is in much more of a stable position and they could cause a great upset to some of the Championship’s big boys next season. 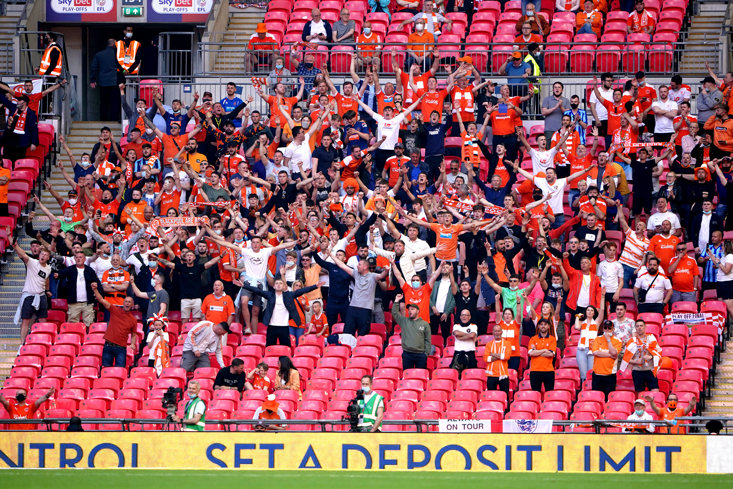 The game did not go according to plan in the opening minute after Lincoln found themselves ahead after just 47 seconds on the clock – the quickest goal scored in any club fixture at Wembley Stadium. Brennan Johnson found space down the right and his low cross was missed by goalkeeper Chris Maxwell at the near post and defender Ollie Turton turned the ball into his own net. A dream start for the Imps.

Following the goal, Blackpool turned up a gear looking to get back into a game that had barely just started. They were creating a number of opportunities as Lincoln were trying to hold their early lead.

Just before the half-hour mark, Lincoln nearly doubled their lead when midfielder Jorge Grant rattled the crossbar with an effort from outside the box before Demetri Mitchell almost brought the Seasiders level had it not been for a great save by Alex Palmer.

Blackpool deservedly pulled themselves level on the 34th minute courtesy of a left-footed strike from Dougall, after build-up play from Jerry Yates and Sunderland loanee Elliott Embleton. Palmer was able to get a hand to it but the power was too much. 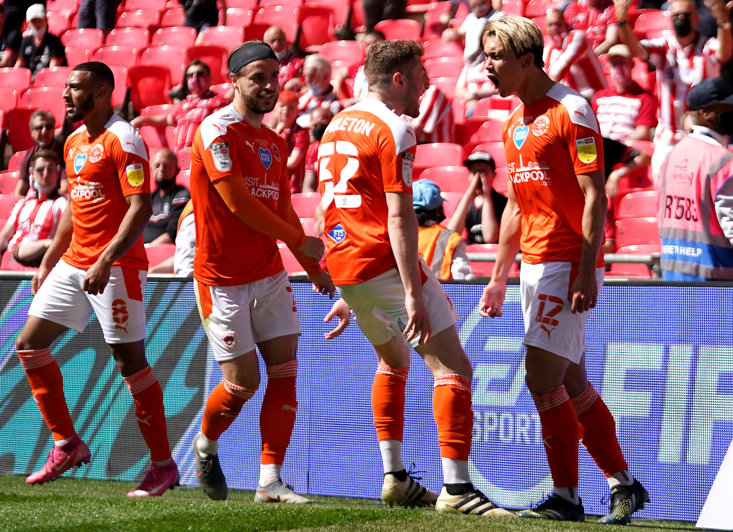 Full of confidence, the Seasiders continued to win the ball high up the pitch in search of a second with Lincoln struggling to cope with the pressure.

Dougall scored his second of the game early in the second-half with another low-thumping effort, this time with his right foot, leaving Palmer no chance.

Lincoln did regroup to try and find a way back into the game but Neil Critchley’s side were resolute in defending their lead to book their place in the Championship for next season.

Speaking after the match to Sky Sports, match-winner Dougall said, "Credit to all the lads, we settled ourselves and once we are ahead in games, we are good. I thoroughly enjoyed it.

"Earlier on in the season, the manager was telling me not to shoot! You don't want to come here and lose but this is our moment and we will enjoy it."

"It was how not to start a play-off final! You speak about managing the first five or 10 minutes and we did everything but. Our response after that was outstanding. I thought we were the better team in the first half. In the second half, we had to soak up a bit of pressure but that's only natural when you're winning the game.

"We limited them to very little and the performance typifies our season. Every single player, including the subs, were outstanding."

A heartbreaking end to a magnificent season for Michael Appleton’s side but their meteoric rise over the last four years should be applauded. In 2017, not only did they win the National League but they grabbed headlines by reaching the FA Cup quarter-finals – dispatching a 0-1 defeat to Premier League Burnley in the process.

They were promoted to League One two years ago and they have already shown their class to get to where they are today. Appleton has done brilliantly to take over from the successful reign of Danny Cowley and they will be a force to be reckoned with next season.

However, today is Blackpool’s day. The Seasiders have come through the darkness and the future looks bright for the Tangerines as they will taste Championship football once more.