Sports
News
What could have been the greatest weekend in Huddersfield’s sporting history became the ultimate tale of what might have been
Kris Voakes
17:10, 30 May 2022

It was meant to be the perfect sporting weekend for the town of Huddersfield. With their football and rugby league teams both having huge dates in London finals there was the chance to leave a lasting impression that could kick-start both clubs to bigger and better things.

But on both Saturday and Sunday, the natives of West Yorkshire trudged away from stadiums in the capital feeling distraught and angry as their teams missed out on major honours by the most slender and contentious of margins.

Huddersfield Giants, chasing their first major trophy in 60 years, led 14-12 against the mighty Wigan Warriors with only four minutes left on the clock in the Betfred Challenge Cup final. Twenty-four hours later Huddersfield Town had Nottingham Forest on the rack as they searched for a second-half equaliser in football’s Championship play-off final.

Yet Liam Marshall’s late Wigan try would deny the Giants following two separate incidents which could have seen the Warriors’ Morgan Smithies sent to the sin bin at least, and it was the same story on Sunday as the Terriers fell short amid claims that they should have had two clear penalties.

So near and yet so far.

The Giants were 9/4 outsiders to win the Betfred Challenge Cup at the Tottenham Hotspur Stadium, but tries from Ricky Leutele, Chris McQueen and Jermaine McGillvary had put them in pole position going into the final quarter. That was despite two incidents early in the second half which had seen Wigan back-rower Smithies escape censure for dangerous tackles.

First, he threw a swinging arm at Joe Greenwood which left the Huddersfield forward prone on the ground, with referee James Child awarding the Giants a penalty but opting for no further action. Then, moments before McGillvary put the underdogs 14-12 ahead, Smithies caught Leutele right across the face with another swinging challenge which left Giants coach Ian Watson perplexed and led to the Wigan man himself admitting his challenge “a bit dumb”.

“It wasn’t intentional,” Smithies told reporters. “It was just a bit dumb, it was a dumb play. I’ll learn my lesson and won’t be doing that again.”

That was no consolation to Watson, who believed Smithies should at least have seen yellow for the challenge on Leutele. “I was expecting more if I’m honest, but he didn’t give it. We’ll have to see what the match review panel say, I thought it was a deciding moment to be fair.”

With no card shown, Wigan rallied and from Harry Smith’s grubber Marshall pounced to win the cup for the Warriors, leaving Huddersfield half way through a weekend from hell, as it turned out. 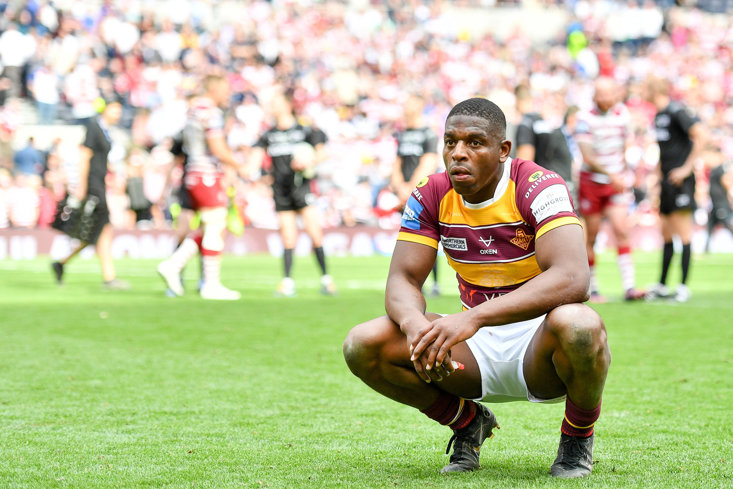 Because the following day at Wembley, the town’s football side were edged out 1-0 by Forest in the encounter billed the “£170m game”, condemning them to another season in the second tier.

Carlos Corberan’s side fell behind to a Levi Colwill own goal shortly before half-time beneath the Wembley Arch, but they twice thought they had found a way back into the game.

First, Jack Colback appeared to have tripped Town’s Harry Toffolo in the area but referee Jon Moss waved away appeals, and then with just over seven minutes remaining Lewis O’Brien and Max Lowe came together in an incident which could well have seen a penalty awarded but again Moss was uninterested.

“Talking with the players, they were thinking that if they didn’t suffer a foul they would have finished the action because both had a clear advantage to finish the attacks. But they are decisions that I cannot take, of course,” Town boss Corberan told reporters afterwards.

“We have the VAR and we have the referee, and you have to accept what happens on the pitch. At the end the referee considered that they weren’t fouls and we can only accept the decisions.”

On both days, Huddersfield fans were left feeling short-changed. Their teams had put up battling efforts in back-to-back finals, but ultimately they came away with nothing. It could have been the greatest weekend in Huddersfield’s sporting history, but instead was the ultimate tale of what might have been.

x
Suggested Searches:
The Sportsman
Manchester United
Liverpool
Manchester City
Premier League
More
sports
Hustle And The Best Sports Films Currently On Netflix
The Adam Sandler renaissance is in full-swing with the Happy Gilmore star’s latest effort, Hustle, [ ... ]
sports
WWE’s Class Of 2002: Two Decades of Dominance, Inside and Outside...
In 2002, just over a year removed from the ‘Monday Night Wars’ between his World Wrestling [ ... ]
sports
Muhammad Ali And The Greatest Trash-Talkers In Sport
Today marks six years since we lost the great Muhammad Ali. Boxing’s most beloved star was as [ ... ]
sports
What Did The World Of Sport Look Like When Queen Elizabeth's...
Queen Elizabeth II celebrates her Platinum Jubilee this week and to commemorate the occasion, we have [ ... ]
sports
Monaco, The Masters And More Unbelievable Experiences In Sport
This weekend sees the Formula One teams, fans and staff arrive in the principality of Monaco for the [ ... ]
sports
Tony Hawk's Impact On The World Of Skateboarding Cannot Be Understated...
In the Smithsonian, a baby blue Bahne skateboard sits proudly on display as part of the National Museum [ ... ]
sports
The Saudi Golf League And Other Breakaway Competitions In Sport
There appears to be a civil war looming in golf as the PGA Tour continues to fight back against the [ ... ]
sports
Britain's Top Ten Greatest Sporting Achievements Featuring Roger...
Four minutes. One mile. The seemingly unbreakable human barrier was brought tumbling down by Roger Bannister [ ... ]
sports
Triple H’s Legacy Lies With WWE’s Next Generation
All that remained was a pair of black boots. Black boots that signified the end as they stood proud [ ... ]
sports
Kevin Owens’ History-Making WrestleMania Match With Steve Austin...
The well trodden adage surmises that heroes are worth avoiding, should you ever be presented with the [ ... ]
sports
The Deadman Didn't Rise: Revisiting The End Of The Undertaker’s...
75,167 people can be just as deafening when they are dead silent as when they are roaring in unison. [ ... ]
sports
The Barkley Marathons: The 100-Mile Race That Broke All Of Its...
In 1977, James Earl Ray, the gunman behind the assasination of Martin Luther King Jr., embarked on an [ ... ]
sports
International Women’s Day: Ten Female Superstars To Watch Out...
In honour of this year’s International Women’s Day, we take a look at ten female sports [ ... ]
sports
How Sport Is Handling The Russian Invasion Of Ukraine
The Russian invasion of Ukraine has cast a shadow over our world, with an uncertain darkness hanging [ ... ]
sports
2022 Commonwealth Games: Eight Stars To Look Out For In Birmingham
In just 150 days, the eyes of the world will be fixated on Birmingham for the 22nd Commonwealth Games, [ ... ]
sports
Looking Back At The Most Calamitous Sporting Performances In...
There is nothing worse when it comes to being a professional athlete than when you have a performance [ ... ]
sports
Talent In Tartan: Why 2022 Could Be The Year Of The Scots
Scottish sport thrived in 2021, with star athletes from north of the border making waves on a global [ ... ]
sports
World Cup, Six Nations And Winter Olympics: The Must-See Sporting...
With the haziness of the New Year celebrations behind us, it is time to clear our minds and look ahead [ ... ]
sports
Most Significant Sporting Moments Of 2021: From Fury's KO To...
Sport makes us feel things. This year, we have witnessed a whole array of emotions from England’s [ ... ]
sports
Euro-Mania, Formula One Fireworks And The Best Sporting Moments...
Despite the ever-looming menace that is Covid, the past year has been an unforgettable one in the world [ ... ]
sports
Remembering The Iconic Sports Stars We Lost In 2021
As we bid farewell to 2021, there is an air of hope as we look ahead to what 2022 might bring in the [ ... ]
sports
From Lineker To Ali’s Legacy: The Sportsman’s Favourite Articles...
What a year it's been in the world of sport! Despite all the ongoing uncertainty surrounding the [ ... ]
sports
Olympic Dreams Realised, Football Justice Done: The Sportsman...
It has been an incredible year of sporting drama and intrigue. With 2021 almost in our rearview mirror, [ ... ]
sports
Football In The Trenches, Shaq Vs Kobe & Christmas Day's Special...
Sport and Christmas Day don’t mix, at least that’s what you’ve been programmed to [ ... ]
sports
Mammoth Upsets, Fairytales and History-Makers: The 2021 Sportswomen...
Despite the ever-looming menace that is Covid, the past year has been an unforgettable one in the world [ ... ]
sports
From 30 Salah Goals To A Hamilton Championship Win - What Will...
What a year it’s been for sport! Despite the ongoing issues brought around by the Covid pandemic [ ... ]
sports
From Tiger To Tyson: The Five Best Sports Documentaries Of 2021
There's been a real boom in the quality of sporting documentaries over recent years and 2021 [ ... ]
sports
Gabriel Medina, The South American Surfin' Superstar Who Neymar...
This article first appeared in The Sportsman on May 14th 2020 On grass they have Pelé, [ ... ]
sports
SPOTY 2021: Role Model Raheem Sterling Would Be Worthy Recipient
The build-up to the BBC’s Sports Personality of the Year award show has begun. Six sports stars [ ... ]
sports
SPOTY Nominees Showcase What An Incredible Year It's Been For...
Sporting brilliance deserves to be recognised and the BBC Sports Personality of the Year awards certainly [ ... ]