Football
News
The magic of the FA Cup is dead? Stockport vs Bolton proved that certainly isn't the case
Joey Mills
13:23, 18 Nov 2021

The two sides met in an FA Cup first round replay at Stockport’s Edgeley Park on Wednesday night. The first game hadn’t exactly been a quiet night at the library, with the National League side battling brilliantly to clinch a 2-2 draw at the University of Bolton Stadium. But the two sides served up a truly unique clash in the replay, one that will live long in the memory.

Something of a local derby, the game was a sell-out and fans snaked all the way up the road even after kick-off. Your scribe made it inside the ground just in time to see the celebrations for Elias Kachunga’s opener for Bolton. As fans continued to file in, it was almost impossible to find your seat. Frequent threats from stewards that the game would be called off littered the first half, as fans gave up the search and stood on stairways and congregated at the front to try and watch the game.

Eventually, the stewards took the nuclear option and enlisted the help of a burly, Harry Maguire-looking gentleman who had been leading the non-stop chanting. Big Harry ordered everyone to clear the walkways, and most did. One brave soul, who looked like he would have fit in the palm of Not-Maguire’s hand, did offer the organisational-ultra out for a fight. If he’d have won that, it would have been a bigger upset than what was unfolding on the pitch. 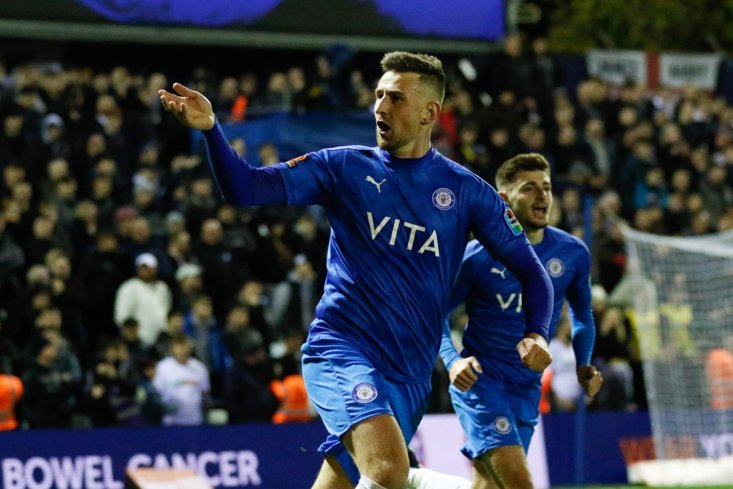 In cup clashes between league and non-league clubs, often a herculean effort to draw the initial game can leave the latter physically and mentally exhausted for the replay. It looked like this was the case early on, as the League One side doubled their lead on six minutes through an Ash Palmer own goal. At almost every other football ground I’ve attended, this would have knocked the stuffing out of the home fans. Not Edgeley Park. Not tonight. Behind me, the drummer starts to toll. Not the absent-minded shuffle you’ll hear at every ground in the country. This lad is Keith f**king Moon. He’s playing drum fills, double-kicks, a shuffle. He batters the skins as if to implore his team. “We’re still in this one, lads.”

A penalty is given. Edgeley erupts. This is their chance. The referee seems to take forever to clear the box so Paddy Madden, who was playing League One football last season for Fleetwood Town, can take his penalty. At this point, a drone flies out from behind the away stand and hovers ominously above the penalty area. Nobody seems to react to it, it’s presence goes undetected. I’ve had a long day, am I hallucinating the drone? I’m not, my companion informs me, similarly thrilled by this airbourne turn of events. Madden coolly slots home his spot kick, and the drone retreats, its goal-lust sated.

There’s barely time for the phrase “game on” to leave your lips before Amadou Bakayoko has made it 3-1. Surely that’s it. A tamely conceded goal, with goalkeeper Ethan Ross caught way off his line, left to helplessly watch the ball apologetically spill into his net. These fans don’t give up though, and spurred on by the rattle and hum of the masses, County push on. With nothing left to lose, The Hatters play their best football of the game so far. Big Harry stops a song mid-stream, admonishing the crowd with a “we don’t sing that one”, before leading a chorus of “County! County!”. Considering the following song is about stamping on Bury fans, one can only imagine the content of the song Not-Maguire nixed.

Football cliches are cliches because they were once truisms. Everyone knows that just before half time is the best time to score, and that’s exactly what Stockport did. Scott Quigley, a striker signed from Barrow in the summer, sent Edgeley into raptures and put his side in touching distance going into the break.

That breathless first half gave way to a more measured second. The crowd had spent their fifteen minute respite finding their correct seats, and amongst the chaos a game of football broke out. County spent most of the second period on the front foot, though occasional bouts of cramp broke up their dominance. County played like the team who wanted it more, resisting occasional bursts of Bolton quality to remain in the ascendancy. 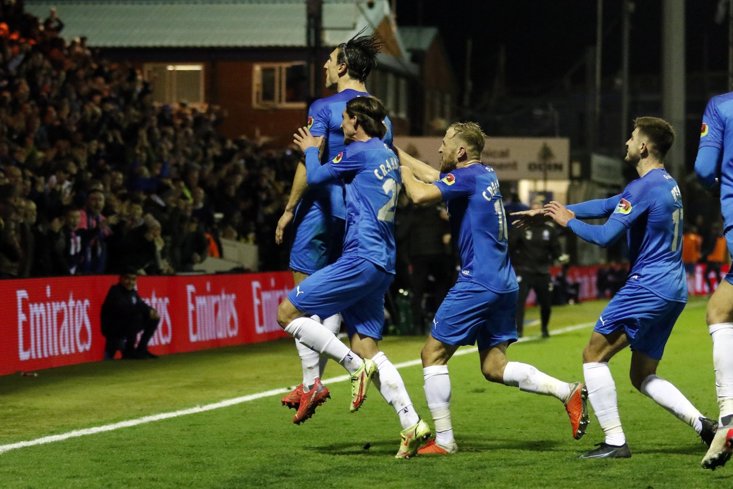 With just a minute remaining, it did go one of those ways. Stockport’s way. Ollie Crankshaw provides a deft finish to kiss the ball past goalkeeper Joel Dixon. Absolute bedlam. A pitch invasion ensues, the stewards and police try desperately to regain control and allow the final seconds of this most incredible game to be played. The fans start to file back into the stands, some are holding advertising boards, one is holding the corner flag. Presumably, one even has Crankshaw’s shirt, as the topless goalscorer is hastily given a replacement. Eventually, the corner flag is returned and play resumes. For about one second, then the final whistle blows and before most of them have even sat down, the pitch invaders go back for round two.

Round two is also where Stockport County are heading, after pulling off an enthralling upset to knock out a team two leagues above them. They will travel to Rotherham United as their already-exhilarating cup journey continues. On this evidence, you could do a lot worse than landing yourself a ticket.