Cricket
News
Two ducks in two ODI matches vs the Netherlands has caused concern for the skipper
Simon Lillicrap
07:00, 21 Jun 2022

We have seen two sensational ODI performances from England in the Netherlands. After hitting a world record 50-over total of 498 in match one, they followed it up with another convincing win in Amsterdam to seal the series.

But the flying form of the team has meant that captain Eoin Morgan has stood out like a sore thumb, and not in a good way. His back-to-back ducks against an inconsistent Netherlands side has raised serious doubts about his place in the world-class batting line-up.

It’s important to separate Morgan the captain from Morgan the cricketer. As a captain, he has been fantastic for the one-day side. He has helped transform a team that was poor at the 2015 World Cup, into world champions four years later in the most dramatic fashion.

That day at Lord’s will be the legacy of Morgan’s one-day team and is unlikely to be beaten for sporting drama by any England cricket side of the future. But where does the 35-year-old sit amongst his peers in 2022?

The rest of his teammates are right behind him, vehemently so. Jason Roy, who was presented with his 100th cap by the captain ahead of the second ODI, believes the selfless batsman puts the team first on every occasion.

"We won the game so [Morgan] puts [the duck] to bed straight away. As soon as the result is there, he's happy," said Roy, who added that he was backing his captain "for sure".

"He's the perfect guy to give it [100th cap] to you," Roy added. "You're not judged by your cricket in this group, you're judged as a person and the energy you bring, how hard you work. If he went on [speaking] for a minute longer, there might have been a tear or two."

The scorecard for the first ODI made for embarrassing reading for both Roy and Morgan, as three England players made centuries and Liam Livingstone hit an unbeaten 66 in 22 balls. Roy recovered with 73 in the second match, but the captain was once again scoreless as his poor form continued. 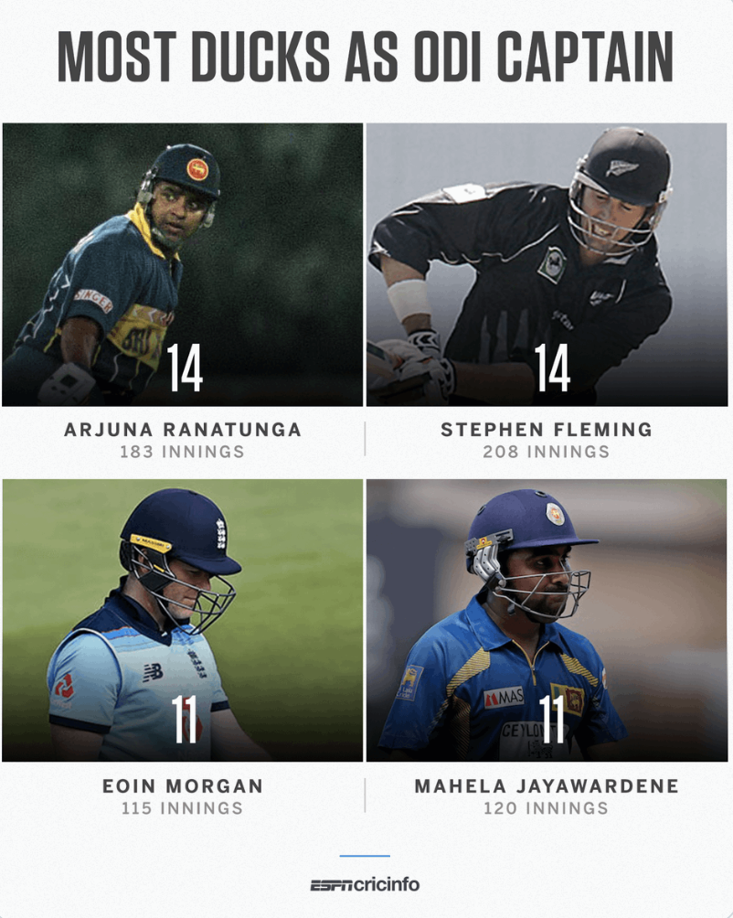 He has made just one half-century in international cricket over the last 18 months, and none in domestic T20 cricket. While others around him flourish, he has suffered as a result of an injury suffered in January and a lack of short-form cricket over the Covid period.

Although the games against the Netherlands have allowed England to shake off any cobwebs, the real challenges will come against India and South Africa in July, as preparations for the World Cup in October ramp up. England are currently 3/1 favourites to win their first T20 World Cup since 2010 and Matthew Mott, the new white-ball coach has fully-supported Morgan despite his poor form.

"He always says he wants to be picked as a batter in that team on form and merit all the way through and when he feels that's not the case then he would step aside," Mott said in a press conference. "I think that's a long way off being at that point.

"Great players go through runs at different times and sometimes you flick a switch and it turns and you wonder what all the fuss has been about. You can tell when he speaks, everybody is listening. That leadership is something that's probably not as recognised as much from the outside as it is inside. He's got a lot of great cricket ahead of him."

Morgan himself has been reflective in recent weeks on his own performance, and with England looking to defend their 50 over crown in India next year, the captain is unsure as to whether he will still be leading the team in the winter of 2023.

"That's a long way away. I need to get to the T20 one first. I'm going to take it as it comes, managing my contribution, my body. Am I still contributing on and off the field, within the team? I will be as honest as I [have been] with everybody since I started the captaincy. At the moment, I still feel like I contribute and still feel like I can contribute to a World Cup win. That's an important drive for me."

x
Suggested Searches:
The Sportsman
Manchester United
Liverpool
Manchester City
Premier League
More
cricket
On Song England Beat India By Seven Wickets With Record Chase...
Wow. What a difference a year makes!  Last summer England were on the brink of being hammered 3-1 [ ... ]
cricket
Jos Buttler Named Captain Of England White-Ball Cricket Teams
Jos Buttler has been appointed captain of the England Men’s white-ball teams by the England & [ ... ]
cricket
Ducks, Books And Cricket Sucks: The England v India Test Series...
Cast your mind back to a time when Chris Silverwood was England coach and Joe Root was captain. When [ ... ]
cricket
England's Greatest: Eoin Morgan Will Go Down In History As A...
When Eoin Morgan retires from international cricket on Tuesday, a gap will appear in the England dressing [ ... ]
cricket
England Secure First Home Series Whitewash In Nine Years After...
Captain Ben Stokes saluted his side after England secured their first home series whitewash in nine [ ... ]
cricket
WATCH: Henry Nicholls' Bizarre Dismissal Against England
We have just witnessed one of the most incredible things ever seen in a Test cricket match! During [ ... ]
cricket
Is It Time For England To Separate Their Test Side From ODIs...
Joe Root was England’s top scorer at the last Cricket World Cup. Jonny Bairstow leathered back-to-back [ ... ]
cricket
England Smash ODI World Record As Jos Buttler Hits 162 in 70...
England have just done something truly spectacular. Against the Netherlands, Eoin Morgan’s side [ ... ]
cricket
Brilliant Jonny Bairstow Batters New Zealand As England Take...
Jonny Bairstow smashed England’s second fastest ever Test century as Ben Stokes’ side wrapped [ ... ]
cricket
Unstoppable Jimmy Anderson Brings Up 650 Wickets With Plenty...
When a young James Anderson conceded a no-ball as his first act as a Test bowler and went on to concede [ ... ]
cricket
Why Ben Stokes' And Joe Root's Differing Personalities Suit...
As England prepare to take on New Zealand, looking to win back-to-back Tests on home soil for the first [ ... ]
cricket
Joe Root: England's Greatest Ever Batter Now Has The World's...
If there was ever any doubt about Joe Root’s class, it is simply beyond debate after his match-winning [ ... ]
cricket
Majestic Joe Root Leads England Into A New Era With New Zealand...
The new era of English cricket started with a bang as Joe Root’s masterclass hundred led England [ ... ]
cricket
The English Cricketing Summer Won't Be The Same Without Shane...
There’s a piece of the English summer missing. New Zealand wickets fell at regular intervals on [ ... ]
cricket
New Era, New Hope? England Cricket Seeking A Fresh Start After...
A new Test summer brings a new captain, new coach, new managing director and new approach to English [ ... ]
cricket
Brendon McCullum Not Afraid Of England Challenges With Ben Stokes...
Brendon McCullum strolled around Lord’s, soaking up the ‘Home of Cricket’ as [ ... ]
cricket
Stokes The Skipper: However Long It Lasts, It Should Be One...
He dragged England from the brink in the 2019 World Cup final to help record the most dramatic victory [ ... ]
cricket
Joe Root's Resignation Leaves England's Men's Test Team At An...
Now what do England do? They have failed to win any of their last nine Men’s Tests, have one victory [ ... ]
cricket
Everything You Need To Know About The Hundred 2022
The Hundred is back for its second edition and with the draft having taken place earlier this week, [ ... ]
cricket
Why The Hundred Deserves The Main Billing Ahead Of Suffering...
While England’s women flew the flag proudly for the nation during the recent World Cup, England’s [ ... ]
cricket
England Suffer Final Heartbreak As Australia Win Women's World...
England suffered heartbreak on the grandest stage as history makers Australia blasted their way to a [ ... ]
cricket
Can Underdogs England Secure Most Unlikely World Cup Win vs...
England have risen like a phoenix from The Ashes and are out for redemption in the Women’s World [ ... ]
cricket
Can Heather Knight's England Complete Staggering Turnaround...
Resurgent England have produced a remarkable turnaround to keep their Women’s World Cup title [ ... ]
cricket
Root Of The Problem: Do England Need A Change Of Captain?
It’s true: England have become the laughing stock of world cricket. So, has the time come for [ ... ]
cricket
West Indies vs England Preview: Lifeless Pitches Will Kill Test...
Sir Geoffrey Boycott had it right when he said “The future of Test cricket is at stake — [ ... ]
cricket
England Once Again Fail To Find Knockout Blow In Hard-Fought...
England captain Joe Root stressed he saw plenty of “progression” from his side after a gruelling [ ... ]
cricket
Shoots Of Recovery: England Batsmen Finally Re-Pay Under Fire...
England endured an Ashes series to forget. Hammered by arch-rivals Australia, skipper Joe Root just [ ... ]
cricket
Strauss And Collingwood Era Begins As England Aim To Restore...
England’s new-look Lions begin their three-match tour of the West Indies on Tuesday desperate [ ... ]
cricket
Australian Cricket Legend Shane Warne Dies At 52
Australian cricket legend Shane Warne has died at the age of 52 after a suspected heart attack. Warne, the [ ... ]
cricket
Australia, New Zealand Or England: Who Will Win The Women's...
We’re back in New Zealand for a women’s Cricket World Cup, 22 years after the last tournament [ ... ]