Cricket
News
Last summer's five-Test series will belatedly come to an end this week when the fifth Test is played at Edgbaston
Kris Voakes
16:05, 30 Jun 2022

Cast your mind back to a time when Chris Silverwood was England coach and Joe Root was captain. When Rory Burns, with five ducks in his last 10 knocks, and Dom Sibley, coming off eight single-figure scores in 10 innings, were opening the batting. When there was no Ben Stokes, and the middle order comprised of Dan Lawrence, Jos Buttler - prior to his becoming white-ball skipper and Test outcast - and a Jonny Bairstow who had recorded six ducks in five Tests against India. And Ollie Robinson, their hot new bowling prospect, had immediately found himself embroiled in a racism scandal.

That was only last summer, with Virat Kohli and his India side coming to these shores to begin a five-Test series which will belatedly come to an end this week when the fifth Test is played at Edgbaston.

But while the world looks very different after England’s 3-0 whitewash of New Zealand under Stokes and Brendon McCullum, it’s worth reminding ourselves just what materialised when the first four matches of this series were played out…

England are rocked on their heels before a ball has been bowled, with Ollie Pope suffering an injury. With Stokes already unavailable, the middle order suddenly looks desperately short of quality. They collapse, unsurprisingly, to 183 all out. Joe Root’s top score of 64 can’t make up for the four ducks in the rest of the lineup. Lawrence and Buttler accounting for two of them.

Robinson returns from his racism ban to take 5 for 85 to limit India’s first innings lead to 95, before a Root century helps to set India 209 to win. The tourists are 52 for 1 before rain wipes out the entire final day. Rain dances are more effective than batting lineups, we find out. 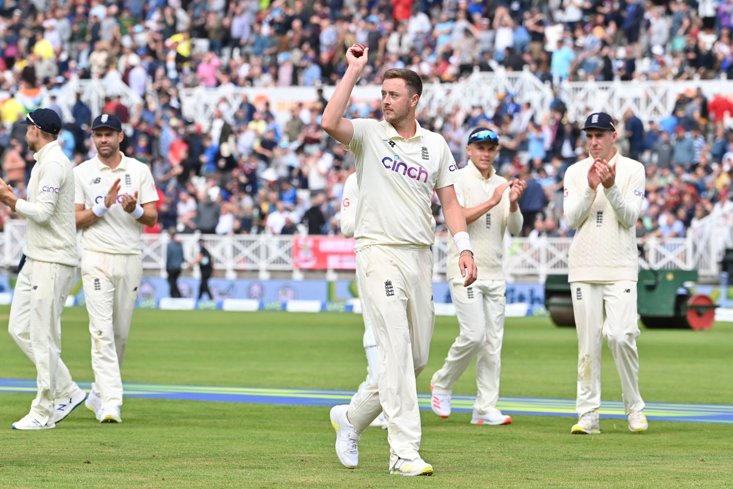 England are without Stuart Broad due to a calf strain, which is good news for Jimmy Anderson since apparently the pair can only play in the same team once a series because of some sort of voodoo. Haseeb Hameed comes in for Zak Crawley and scores 0 and 9. Burns and Sibley score a grand total of zero between them in the second innings. The result is as you would expect taking all that into account.

KL Rahul gets a ton in India’s 364 first time out as Anderson takes a five-for, Root responds with 180 not out as England claim a 27-run lead but only Bairstow sticks around with him for any significant period. The visitors get contributions right down the order second time up and set England 272 to win, skittling the hapless hosts for 120 in less than 52 overs to take a series lead.

A win! A win! A win! England’s last under Silverwood and Root, and their only one in 17 attempts prior to the dawn of ‘Bazball’. Anderson’s 3 for 6 and Craig Overton’s 3 for 14 lead a dominant first-day bowling display under leaden skies as India score just 78. Good job Kohli opted to bat, eh?

England finally get a good start with the bat, with Burns, Hameed and Dawid Malan all scoring 60-plus before Root hits a hundred as though we were watching repeats of the first two Tests. Trailing by 354, India manage 278 in their second knock as Robinson takes five-for.

RESULT: England win by an innings and 76 runs 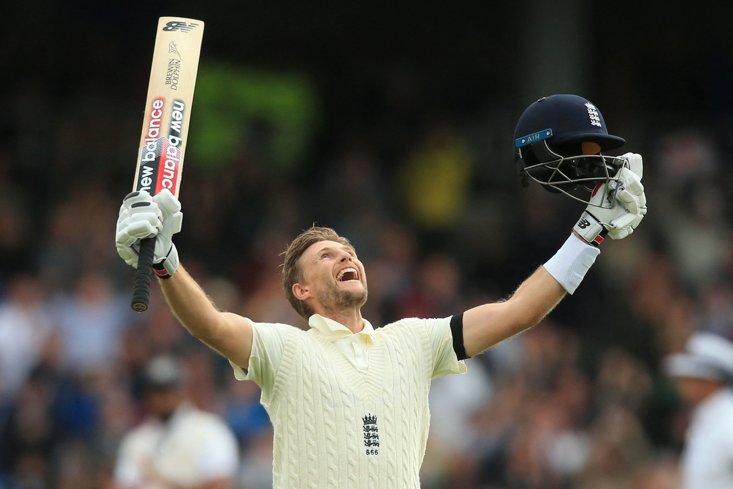 Root celebrates his century in the Third Test at Headingley

Bairstow takes the gloves and Pope returns. Bowling first, Chris Woakes – yes, remember him? – leads the early charge as India fall to 191 all out. Pope’s 81 is the highlight of England’s 290. A 99-run lead… so far, so good.

On Saturday, India take over. Rohit Sharma digs in to score 127 and the tail wags to set the hosts a target of 367. Despite a century opening stand between Burns and Hameed, England collapse to 210 and the chance of a series win is gone.

So delirious are India at their advantage going into the final Test at Old Trafford that coach Ravi Shastri believes himself impervious to Covid-19 and heads off to launch his new book in a public event, taking captain Kohli with him. What could possibly go wrong?

Within days, the Fifth Test is forced to be scrapped as an outbreak of Covid ravages the India camp. Lancashire CCC report ‘unprecedented’ financial issues due to refunds, the series – and World Test Championship – are left in limbo, and thousands of ticketed fans are left with a whole cricket-less weekend to fill. Still, let’s hope Shastri got all the book sales he was after.

Thankfully, we’re back on. It’s a different venue, a different year and a very different England, but the series will finally come to an end over the next week. Was a one-year delay enough for the home side to get their house in order? And will ‘Baz and Ben’ continue their kamikaze-first, worry-later winning spree?

The long-awaited final chapter is upon us.

x
Suggested Searches:
The Sportsman
Manchester United
Liverpool
Manchester City
Premier League
More
cricket
Everything You Need To Know About The Hundred 2022
The Hundred returns tomorrow for its supposedly ‘difficult second album’. However, all [ ... ]
cricket
An ODI Icon: The Day Ben Stokes Won The World Cup For England
He arrived at the crease with England 71 for three in the 20th over. They were behind the rate and losing [ ... ]
cricket
Edgbaston To Employ Undercover Abuse Spotters For England v...
Cricket chiefs are set to employ “undercover football crowd-style spotters” at Edgbaston [ ... ]
cricket
On Song England Beat India By Seven Wickets With Record Chase...
Wow. What a difference a year makes!  Last summer England were on the brink of being hammered 3-1 [ ... ]
cricket
Jos Buttler Named Captain Of England White-Ball Cricket Teams
Jos Buttler has been appointed captain of the England Men’s white-ball teams by the England & [ ... ]
cricket
England's Greatest: Eoin Morgan Will Go Down In History As A...
When Eoin Morgan retires from international cricket on Tuesday, a gap will appear in the England dressing [ ... ]
cricket
England Secure First Home Series Whitewash In Nine Years After...
Captain Ben Stokes saluted his side after England secured their first home series whitewash in nine [ ... ]
cricket
WATCH: Henry Nicholls' Bizarre Dismissal Against England
We have just witnessed one of the most incredible things ever seen in a Test cricket match! During [ ... ]
cricket
Is It Time For England To Separate Their Test Side From ODIs...
Joe Root was England’s top scorer at the last Cricket World Cup. Jonny Bairstow leathered back-to-back [ ... ]
cricket
Duck, Duck, Excuse: Captain Morgan's On Shaky Legs As England...
We have seen two sensational ODI performances from England in the Netherlands. After hitting a world [ ... ]
cricket
England Smash ODI World Record As Jos Buttler Hits 162 in 70...
England have just done something truly spectacular. Against the Netherlands, Eoin Morgan’s side [ ... ]
cricket
Brilliant Jonny Bairstow Batters New Zealand As England Take...
Jonny Bairstow smashed England’s second fastest ever Test century as Ben Stokes’ side wrapped [ ... ]
cricket
Unstoppable Jimmy Anderson Brings Up 650 Wickets With Plenty...
When a young James Anderson conceded a no-ball as his first act as a Test bowler and went on to concede [ ... ]
cricket
Why Ben Stokes' And Joe Root's Differing Personalities Suit...
As England prepare to take on New Zealand, looking to win back-to-back Tests on home soil for the first [ ... ]
cricket
Joe Root: England's Greatest Ever Batter Now Has The World's...
If there was ever any doubt about Joe Root’s class, it is simply beyond debate after his match-winning [ ... ]
cricket
Majestic Joe Root Leads England Into A New Era With New Zealand...
The new era of English cricket started with a bang as Joe Root’s masterclass hundred led England [ ... ]
cricket
The English Cricketing Summer Won't Be The Same Without Shane...
There’s a piece of the English summer missing. New Zealand wickets fell at regular intervals on [ ... ]
cricket
New Era, New Hope? England Cricket Seeking A Fresh Start After...
A new Test summer brings a new captain, new coach, new managing director and new approach to English [ ... ]
cricket
Brendon McCullum Not Afraid Of England Challenges With Ben Stokes...
Brendon McCullum strolled around Lord’s, soaking up the ‘Home of Cricket’ as [ ... ]
cricket
Stokes The Skipper: However Long It Lasts, It Should Be One...
He dragged England from the brink in the 2019 World Cup final to help record the most dramatic victory [ ... ]
cricket
Joe Root's Resignation Leaves England's Men's Test Team At An...
Now what do England do? They have failed to win any of their last nine Men’s Tests, have one victory [ ... ]
cricket
Everything You Need To Know About The Hundred 2022
The Hundred is back for its second edition and with the draft having taken place earlier this week, [ ... ]
cricket
Why The Hundred Deserves The Main Billing Ahead Of Suffering...
While England’s women flew the flag proudly for the nation during the recent World Cup, England’s [ ... ]
cricket
England Suffer Final Heartbreak As Australia Win Women's World...
England suffered heartbreak on the grandest stage as history makers Australia blasted their way to a [ ... ]
cricket
Can Underdogs England Secure Most Unlikely World Cup Win vs...
England have risen like a phoenix from The Ashes and are out for redemption in the Women’s World [ ... ]
cricket
Can Heather Knight's England Complete Staggering Turnaround...
Resurgent England have produced a remarkable turnaround to keep their Women’s World Cup title [ ... ]
cricket
Root Of The Problem: Do England Need A Change Of Captain?
It’s true: England have become the laughing stock of world cricket. So, has the time come for [ ... ]
cricket
West Indies vs England Preview: Lifeless Pitches Will Kill Test...
Sir Geoffrey Boycott had it right when he said “The future of Test cricket is at stake — [ ... ]
cricket
England Once Again Fail To Find Knockout Blow In Hard-Fought...
England captain Joe Root stressed he saw plenty of “progression” from his side after a gruelling [ ... ]
cricket
Shoots Of Recovery: England Batsmen Finally Re-Pay Under Fire...
England endured an Ashes series to forget. Hammered by arch-rivals Australia, skipper Joe Root just [ ... ]