Snead. Nicklaus. Woods. All of the greats have lifted the Claret Jug outside the famous Royal & Ancient clubhouse, battling a course that disguises its mischievous twists and turns with its beautiful seaside landscape. The weather can control a round as much as the person with a club in their hands, and the countless hazards make for anxious, treacherous golf at the best of times.

When the professional golf tours arrive in Fife, the world watches and waits. This time is no different, but it’s worth taking a look at the great events of the past to remind us of the good times to come this week.

By the sunset of day two in the 1978 Open Championship, you’d be forgiven for thinking that it was Japan’s year to get a major win on the board. Isao Aoki led alongside Seve Ballesteros and Ben Crenshaw on -5, with Masashi Ozaki and Tsuneyuki Nakajima just two shots behind. Things were looking good for the Asian contingent, however the trio failed to find similar success on days three and four.

Going into the final day, Simon Owen of New Zealand was leading the field as he stood on the 16th tee. Three more holes without a bogey or worse would confirm his first and only major championship. Unfortunately for the Kiwi, he bogeyed both the 16th and 17th holes as Nicklaus found birdie on both.

From two shots behind to two shots ahead, it would turn out to be his third and final Open Championship victory. It was at St Andrews where Nicklaus hung up his metaphorical boots, bidding farewell in 2005 as he closed out his golfing career. There’s no doubt that it still holds a special place in the heart of the most successful major winner of all-time. 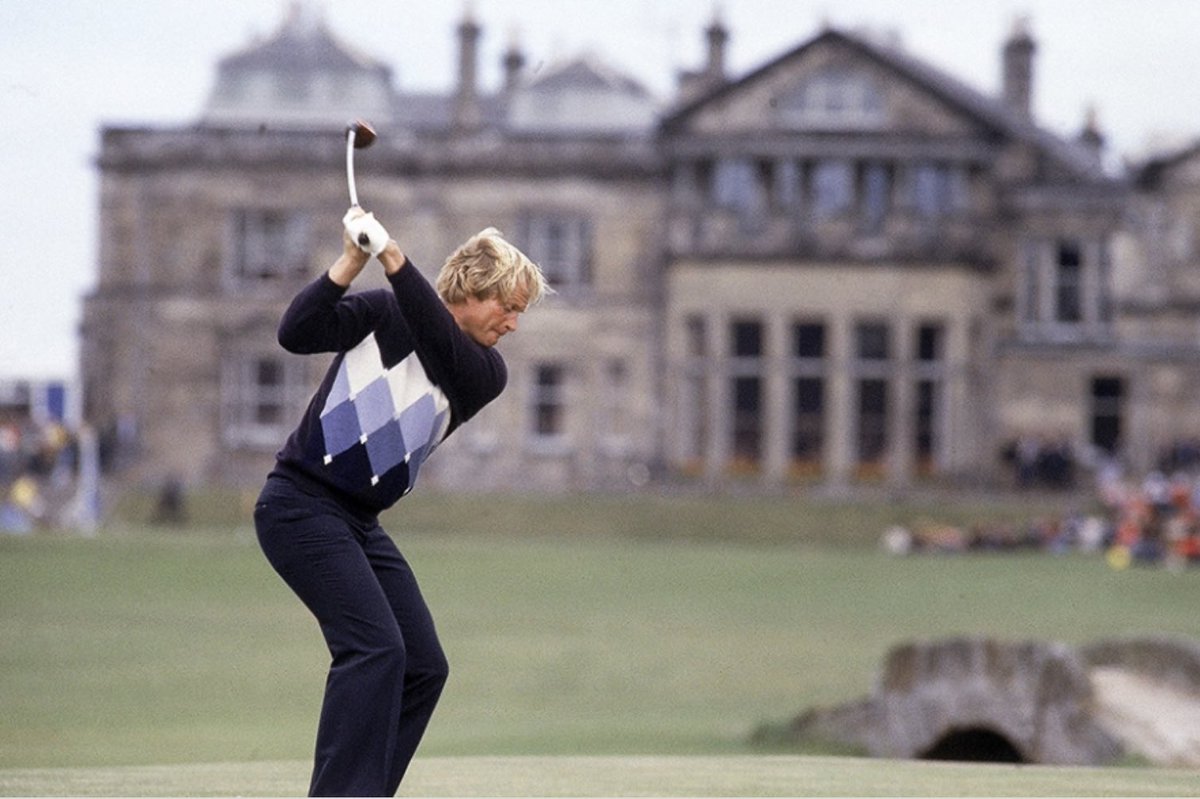 Unique and iconic in every way, Seve Ballesteros won three Open Championships in his career, but none were more spectacular than his second in 1984, where he battled with the world’s best players, all in the form of their lives, to win on the final day.

The narrative going into the tournament was around Tom Watson, who was ready to win his third championship in a row, and up until the final day, he led the field, closing day three at -11. All inside the top ten were Nick Faldo, Lee Trevino, Bernhard Langer, Fred Couples and the eventual winner, Ballesteros.

A final score of -12 confirmed his win, finishing two shots ahead of Langer and Watson. A birdie on the 18th saw huge celebrations and Seve’s iconic triple fist pump, a moment that was remembered forever in part to his incredible victory, but also how he was remembered when he passed away in 2011 aged 54. Team Europe used a silhouette of his celebration on their shirts as they performed the ‘Miracle of Medinah.’

John Daly travelled to Scotland with ambitions. Ambitions of perhaps a top five finish like he got at The Masters in 1993. Maybe eyeing up a clubhouse lead on one of the four days. He probably didn’t quite predict that he’d end up lifting the Claret Jug.

Maybe it shouldn’t have come as quite a surprise. He had played well at the Dunhill Cup previously, which was held at the Old Course. The course is suited to Daly’s game of big drives and long irons, as it was to a debutant that year by the name of Eldrick ‘Tiger’ Woods. By the end of day four, Daly had finished a shot ahead of Constantino Rocca but the Italian managed to sink a 60+ foot putt for the birdie he needed to take ‘The Lion’ to a playoff.

Unfortunately for Rocca, the playoff’s third hole of four saw him end up in the road hole bunker, a horrible pit in which he took three shots to get out. Daly’s flamboyant approach to life was rewarded in the game of golf, and the crowd erupted as the people’s champion was crowned. Daly only ever won two majors in his career, and was never selected to play for Team USA in the Ryder Cup, but he will always be remembered for his exploits in Fife back in ‘95.

Five years on from his Open Championship debut, Tiger returned to his favourite course with wins of the Masters, PGA Championship and US Open. As the world held its breath waiting for the then-24-year-old to win The Open to complete his first Grand Slam, he had his own ideas. And so was born, the Tiger Slam.

Tiger became the youngest ever golfer to achieve a Grand Slam, and that weekend in St Andrews saw him set the record for lowest score to par in any major tournament, at -19. The ‘Tiger Slam’ was when he held all four major championships simultaneously, which he completed at the 2001 Masters.

Most incredibly of all, Woods didn’t even hit a single bunker with all 269 of his shots. A ridiculous accomplishment for a ridiculous player of the game. His walk to the 18th green as thousands followed the famous red shirt was nothing short of legendary.

Aged 29, Tiger joining Jack Nicklaus, J.H. Taylor, James Braid and Bob Martin as the only players to have won twice at St Andrews as he nailed a -14 victory over home favourite Colin Montgomerie, five shots over the Scot.

The rest of the field fought a close fight, with Fred Couples and Jose Maria Olazabal in third on -8, before Sergio Garcia, Bernhard Langer and Vijay Singh on -7. It marked a milestone tenth career major for Tiger, and with the record sitting at 18, hitting so many majors before turning 30 put the odds in his favour of reaching Nicklaus’s record.

It was a wire-to-wire victory, with a birdie on hole nine of his first round handing him the lead which he maintained until he lifted the Claret Jug on Championship Sunday. In the same weekend, Jack Nicklaus called time on his career after missing the cut in his 164th major championship. Tiger knew that was the level he would need to be at to break his record, and that still stands today.

x
Suggested Searches:
The Sportsman
Manchester United
Liverpool
Manchester City
Premier League
More
golf
Luke Donald Confirmed As Europe's Captain For 2023 Ryder Cup
Luke Donald has been named Europe’s Ryder Cup captain, replacing Henrik Stenson who was sacked [ ... ]
golf
LIV Golf: The Players Who've Made The Switch And Those Who Haven't
LIV Golf arrived into the world of golf with a whimper, followed by a bang. After initial sniggers from [ ... ]
golf
Cameron Smith Refuses To Rule Out LIV Golf After Open Victory...
Cameron Smith had one of the comebacks of the year on Sunday at St Andrews, going -8 under par for the [ ... ]
golf
Cameron Smith Wins The 150th Open Championship On Dramatic Final...
Cameron Smith has won The 150th Open Championship after a nail-biting finale at St Andrews. The title [ ... ]
golf
McIlroy & Hovland Share The Lead: Day Three At The Open Championship
All eyes were focused on the duel between Norway’s Viktor Hovland and Northern Ireland’s [ ... ]
golf
Tiger's Farewell Tears And Smith's Putting: Day Two At The Open...
Three-time champion Tiger Woods was left in tears at the end of his round on day two, in what he thinks [ ... ]
golf
McIlroy's Promising Start And Tiger Tees Off: Day One At The...
Rory McIlroy enjoyed almost the perfect opening round to his Open. The 2014 Champion Golfer of the Year [ ... ]
golf
WATCH: Ian Poulter's Extraordinary 160-Foot Putt On The Ninth...
Ian Poulter might have already made one of the putts of the tournament at the 150th Open Championship as [ ... ]
golf
The 150th Open Championship: A Guide For The Old Course
It’s game week and the 150th Open Championship is underway with practice rounds for the greatest [ ... ]
golf
Tiger Woods Says LIV Golf Defectors ''Have Turned Their Backs''...
Tiger Woods has waded into the PGA Tour’s feud with the controversial LIV Golf Series to reiterate his [ ... ]
golf
The 150th Open Championship: McIlroy Favourite As Golf Returns...
Words fail to describe the beauty of Scottish links golf. Greens the size of islands, filled with twists [ ... ]
golf
The Open Championship's Prize Pot Increases By 22 Per Cent
The winner of the 150th Open at St Andrews next week will receive a championship-record £2 [ ... ]
golf
Bryson DeChambeau Hopes People Can See The 'Good' Saudis Are...
LIV Golf star Bryson DeChambeau has said that he wants people to see the ‘good’ that Saudi [ ... ]
golf
The DP World Tour Bans LIV Golf Players From The Scottish Open
The DP World Tour has handed out £100,000 fines to all the players who competed in June’s [ ... ]
golf
R&A Confirms LIV Golf Series Stars Will Be Invited To The Open...
The Royal & Ancient Golf Club has confirmed that players signed up to the LIV Golf Series will be [ ... ]
golf
US Open Preview: European Stars Can Dominate The Top Ten
After weeks of folie à deux in the world of golf, the world’s finest players return to [ ... ]
golf
Rory McIlroy And Linn Grant Weekend Wins Overshadow LIV Golf...
The inaugural LIV Golf event at London’s Centurion Club was left in the dust on Sunday thanks [ ... ]
golf
The Troublesome Timeline Of LIV Golf: How Did We Get Here?
The most controversial topic in sport right now, the LIV Golf tournament, teed off on Thursday after [ ... ]
golf
Dustin Johnson's Defection Could Change Not Just Golf But Sport...
To call Dustin Johnson’s withdrawal from the PGA Tour on Tuesday “seismic” would be [ ... ]
golf
Everything You Need To Know About The 2022 PGA Championship
‘This is Major’ is the PGA’s chosen slogan for their flagship major event, as the [ ... ]
golf
Betfred Donate £19,000 To Prostate Cancer UK After Danny Willett...
Thorbjørn Olesen may have walked away with the Betfred British Masters title over the weekend, [ ... ]
golf
Betfred British Masters: Thorbjorn Olesen Triumphs With Spectacular...
Thorbjorn Olesen clinched the Betfred British Masters title with an incredible 35-foot putt on the 18th [ ... ]
golf
Thorbjorn Olesen Three Clear Heading Into Final Day Of Betfred...
Following a miserably wet Friday, the sunshine returned to The Belfry on Saturday as round three of [ ... ]
golf
Hurly Long And Danny Willett Shine On Day Two At Betfred British...
It was another action-packed day at The Belfry in Sutton Coldfield for day two of the Betfred British [ ... ]
golf
Great Danes Enjoy Profitable Opening Day At Betfred British...
If watching Christian Eriksen run the show in the Premier League wasn’t enough, now several other [ ... ]
golf
Everything You Need To Know About The Betfred British Masters
The British Masters is upon us and Danny Willett has chosen The Belfry again as the host for one of [ ... ]
golf
Phil Mickelson Plays Both Sides As Golf’s Civil War Begins
Phil Mickelson, American golf hero and people’s champion left many fans flabbergasted by [ ... ]
golf
Lazarus With A Five Iron: Tiger Roars Back At The Masters On...
On April 14 2019, the weather was looming ominously in Augusta, Georgia. The only thunder that ultimately [ ... ]
golf
Scheffler Shines, Rory Reborn & Tiger Returns: 5 Things We Learned...
Scottie Scheffler's stunning season continued this weekend as he clinched the first major of his [ ... ]
golf
Tiger’s Greatest Triumphs: Three Times Woods Defied All The...
You simply couldn’t write the life of Tiger Woods. A man that has seen it all, won the lot and [ ... ]