Ecuador came for a draw. They set their stall out, left Enner Valencia up front to fend for himself and got players behind the ball. They backed themselves to limit Senegal to a minimal number of chances, and when openings did occur they were quick to stick bodies in the way.

Needing a point to progress to the knockout phase at Senegal’s expense, they did everything in their power to kill the game as their World Cup Group A finale against the Lions of Teranga in Al Rayyan descended into a stop-start struggle.

They ended up with the 2-1 defeat their approach had deserved, with Kalidou Koulibaly’s 70th-minute winner coming less than three minutes after Ecuador had got themselves back into pole position.

La Tri’s plan had lasted less than 42 minutes. Bursting into the penalty area, Ismaila Sarr was body-checked by Piero Hincapie after the defender failed to get anything on the ball. Sarr stepped up and calmly side-footed into the bottom corner past a motionless Hernan Galindez.

Senegal led, and Ecuador’s grand project was a forgotten relic. Now left chasing a goal, Gustavo Alfaro made changes at the break, throwing on Jeremy Sarmiento and Jose Cifuentes and pushing players up alongside Valencia. They looked a better side for it, and they equalised from a corner as Moises Caicedo slotted home from a flick-on at the far post. But they immediately rested back on their laurels and paid the price as Koulibaly got on the end of a free-kick from the left wing to win it for his side.

It is a scenario we have seen a million times before in the final round of group matches at major tournaments. Teams lacking the incentive to really go for a victory immediately go for the spoiling tactics, and then when they’re left needing a goal themselves they find the shift between emphases tough to achieve. 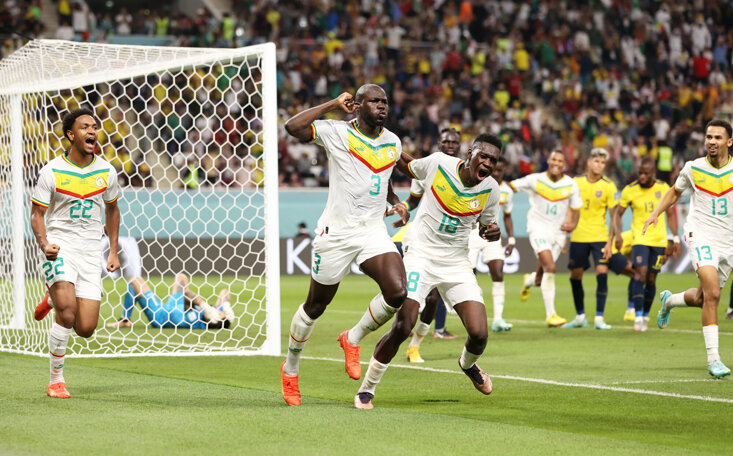 Ecuador had made their bed in the first half. They’d invited the pressure which eventually led to Senegal’s opener, and their reward was exactly what they’d deserved. While Senegal themselves played more cautiously when ahead than they had at 0-0, they at least had a go at gaining the insurance of a two-goal advantage.

They asked questions, they allowed themselves the option of an out-ball to release the pressure in a way Ecuador really didn’t in the opening half, and so when they were pegged back the Lions of Teranga didn’t need a massive gear change to get into scoring positions.

Maybe this is the way of World Cups. Smaller nations on the biggest stages, not truly believing in their abilities in front of goal, deciding not to take too many risks. If you think there are a lot following this script now, just wait for the 16 groups in 2026 as 48 teams rather than 32 take to the finals tournament. In four years’ time across North America we will have even more Ecuadors.

El Tri are ranked 46th in the world and played with the mentality of a team who didn’t feel like they were Senegal’s equals until they had nothing to lose in searching out a goal. To add 16 more teams like them is to simply increase the pool of teams who cannot hope to win the whole thing.

Regardless, it is Senegal who progress, even if they do so without two of the key men. Sadio Mane’s pre-tournament injury was a huge blow, while Idrissa Gana Gueye’s suspension for their round of 16 game against the winners of Group B following a second yellow card robs them of another mainstay.

But if they allow their forward players the ability to counter with hope as they were allowed on Tuesday, they have the right to dream of making it to the quarter-finals whoever they face next. Ecuador would do well to use this as a lesson.