Before we talk boxing, a quick history lesson (don’t worry it still involves lots of fighting). As much as we love to align ourselves with North America, our ancient British DNA is in fact Nordic. The first Viking raiders rowed over from Scandinavia in 739 AD, slaughtered everyone and within a mere 200 years were running the country. And whilst the Vikings were great at plundering, killing and generally taking things that weren’t theirs (essentially the blueprint to the British Empire), they weren’t renowned for what Americans might call ‘showboating’.

The British mentality then is to win, but without fanfare or fuss, and ideally while apologising. The Americans do the whooping, high-fives and white teeth. So it is with sport. When Dana White was forced to reinvent UFC 251 to survive the coronavirus, he made Fight Island; a purpose-built clobbering zone under the blazing Middle East sun in Abu Dhabi. When Eddie Hearn decided on the same approach for boxing, he put a tent up in his back garden and called it Fight Camp.

But it’s exactly this juxtaposition of over the top American thinking combined with minimalist British style that resonates so well with our little island. They have Hollywood, we have Pinewood. They have the Ford Mustang, we have the Ford Capri, they have Fight Island, we have a barbecue round Eddie’s house.

When Dana explained Fight Island to reporters he sold a fighting paradise: “It’s an incredible thing that we’ve pulled off. They have this thing called the safety zone. It’s ten square miles where only we exist on the island at the hotel. Every fighter has their own private training facility. It’s gonna be a unique experience. Very cool.” 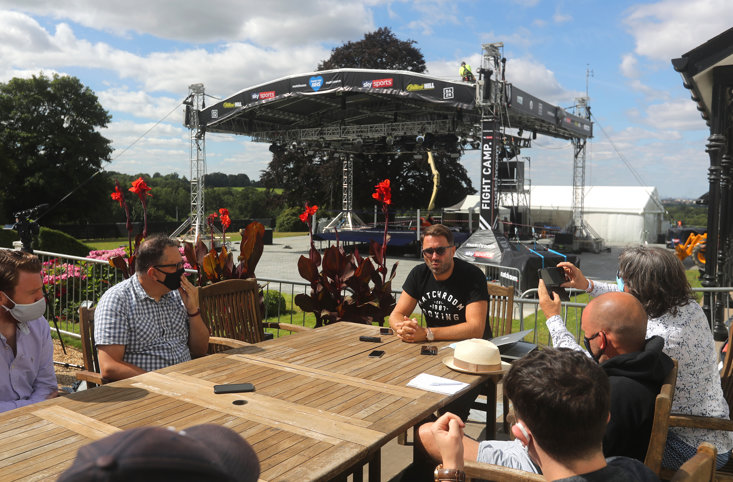 When Eddie explained Fight Camp to talkSport, he basically sold a big afternoon in Wetherspoons: “Don’t get me wrong, our bread and butter is filling up the arena, Sweet Caroline, a few beers on the go and watching a tear-up. That’s what we all want. In the meantime, I think this is going to be really intriguing to the viewer.”

Delivering the flamboyance of boxing in a language we immediately understand is the true genius of Eddie Hearn. This is why British boxing is enjoying a surge in popularity not seen in decades. Sure, Joshua and Fury are the huge names bringing the eyeballs but it’s Hearn’s understanding of the British psyche that is changing the game.

The fights at Fight Camp so far, especially Ted Cheeseman’s career saving victory over Sam Eggington, have delivered excitement in spades, worthy of any global arena. But it’s the behind-the-scenes videos distributed by Eddie’s Matchroom Boxing that could only be British. The first two minutes of the Day 2 video, for example, are dedicated to Dalton Smith in a tiny room, showing the cameras his mini-fridge-next-to-the-bed loaded with fresh salmon “and all different other bits”, before cracking four eggs into a pan on a small hob, and explaining he washes it all down with a nectarine and three litres of water. Seriously, all he needs to do is call reception to ask them to turn the pornography back on and we’re in a full episode of Alan Partridge. And that’s where the gentle mocking ends, because on fight night he stood in front of Nathan Bennet, threw a dummy jab and knocked him out with an overhand right. British thinking, American finishing.

Boxing needs Eddie Hearn. It needs that clever combination of ambition and working class values. But more importantly, it needs someone who understands the British DNA of big results, minimum fuss. Because if he understands what we want, we will trust him to deliver and so far, that trust hasn’t been misplaced, even if he has clearly just stuck a big tent up in his back garden and invited his mates around for a tear-up.