Boxing
News
The promoter has his sights set on a historic fight in New York against Amanda Serrano
Elliott Bretland
13:01, 31 Dec 2019

Eddie Hearn loves making history, think AJ in Saudi or KSI vs Logan Paul in LA. And the boxing promoter has no plans to stop producing historic clashes in 2020, with his sights set on making Katie Taylor the first-ever female boxer to headline at Madison Square Garden in New York.

The 33-year-old Olympic gold medalist became the undisputed lightweight world champion in June, before moving up to 140 pounds and winning the WBO World Super Lightweight crown against Christina Linardatou, in Manchester in November.

Next up Hearn wants Taylor to fight Amanda Serrano in April, at the home of world boxing, affectionately known among fight fans as 'The Garden'.

Serrano has previously turned down advances from the Taylor camp, yet boasts a record of 27 knockouts in 37 pro fights, and has only been beaten once. The 31-year-old has won titles in seven different weight divisions, more than any other female in boxing history.

Speaking to iFLTV about Taylor, Eddie Hearn said: "Look at the year she has had. Rose Volante in Philadelphia to unify the 135 pound division again. Then the undisputed fight in Madison Square Garden on June 1.

"Then steps up to win a second division world title against Linardatou. That's her year. You can't ask for any more than that. 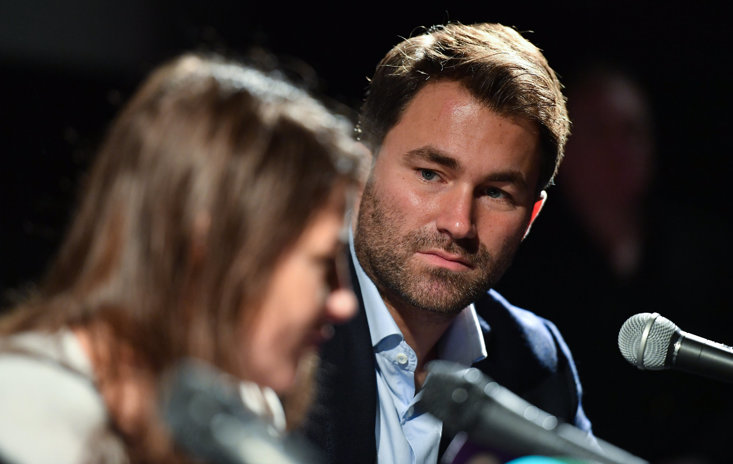 "Now, my aim for Katie Taylor is to establish her as one of the biggest stars in the sport. Forget female or male, just a star of the sport, to give her the credibility, and get her the money that would be ground-breaking in the sport and (an amount) I want her to walk away with.

"It’s a monstrous fight. (Those three fights) could be her year. Even if you get two of the three. Persoon is going to the Olympics which is a bit of a 'gutter’, let her do her thing. First thing first, let’s lock in this Serrano fight. Everybody seems to want the fight. I think Amanda is doing an MMA fight in January. Let her do that and let’s make this fight in April. It’s a wonderful fight."

And Hearn was keen to stress how keen he is to deliver on his promises to Taylor, adding: "I take Katie’s career very seriously. I’m incredibly emotionally invested in her career because I feel like everything is a challenge with what we are doing. I’m very motivated to deliver for her.