After a review by the RFU into England’s woeful Six Nations performance, Eddie Jones has kept his job, with the full backing of the governing body. As it happens, England’s lowest ebb may just have come at the perfect time.

“During the Six Nations we were not up to our usual high standards and we recognise that,” said Jones. “The debrief was a valuable process, we all learned a lot from the experience and most importantly we have identified actions to enable the team to move forward positively towards 2023.

“I’m looking forward to the summer tour which will provide a great opportunity to see more of our emerging talent and I’m confident our next team will come back stronger this autumn building up to a winning performance in the next Six Nations.”

England’s failures and Jones’ failures were clear for all to see. Their ill-discipline was atrocious and cost them as they lost to Scotland, Ireland and Wales to finish second bottom while their lack of fluidity or game management on the pitch was unusual for a side that has been so well-drilled under Jones.

This review, which featured ex and current players, board members and coaches took a deep dive into England’s failings during the tournament. One of the reasons cited was a lack of game time for the Saracens players heading into the Six Nations while Covid-19 was also to blame for several coaches missing sessions.

Losing is acceptable, some may say a necessity and England’s 2020 success appeared to paper over the underlying issues with this squad. Now, this failure has prompted a forward-thinking review of the international side and it seems as if changes are already being made, with the view to lifting the World Cup in 2023. 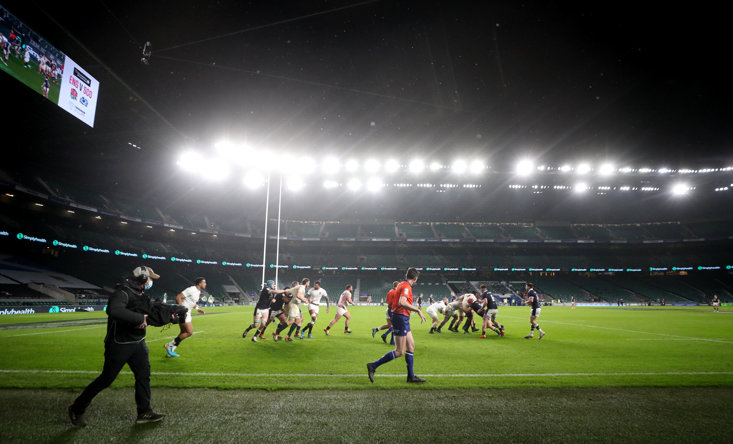 There will be a summer conference in an attempt to close the divide between international rugby and professional clubs, individual player data will be more closely scrutinised in an attempt to solve the ill-discipline issue and sports psychologists will talk to players on a more regular basis.

Added to this, external experts will be brought in to assist Jones after each campaign as the manager attempts to lead England to another World Cup final, as he did in 2019.

However, England’s performances this year have not been that of a side with aspirations to win the next World Cup in France. Luckily for Jones and his players, this low seems to have come at the perfect time. We are still two years away from the showpiece event and with several months to prepare for the Autumn internationals, it would be a surprise if England regressed any further. Finishing 5th in the Six Nations is as bad as it gets for this side and now it is done, they can begin to improve.

The steps the RFU have taken make for positive reading for England fans. Everybody involved now knows that what happened against Scotland, Wales and Ireland, is not acceptable and clear steps have been taken to make sure that it never happens again.

The disastrous 2021 Six Nations campaign has allowed England to hit the much-needed reset button. More analysis, more scrutiny and more responsibility can only be a good thing for results. Who knows, losing to Scotland at Twickenham could have been the turning point that sees Jones lift the World Cup in 2023.

x
Suggested Searches:
Tyson Fury
Manchester United
Marcus Rashford
Lewis Hamilton
F1
Air Jordan
More
rugby
Alun Wyn Jones To Captain British & Irish Lions On South Africa...
Wales legend Alun Wyn Jones will captain the British and Irish Lions squad ahead of their tour in South [ ... ]
rugby
England Dig Deep Against France To Claim Fourth Six Nations...
It wasn’t pretty but England got the job done, beating France 10-6 in a gripping low-scoring classic [ ... ]
rugby
Wales Win Six Nations Championship After Scotland's Late, Late...
Wales have regained the Six Nations Championship they last won in 2019 after France went down to a dramatic [ ... ]
rugby
Can History Repeat Itself? When Wales And France Shared The...
Wales are still favourites to win the Six Nations championship despite missing out on the Grand Slam [ ... ]
rugby
What Do Wales Need Scotland To Do Against France To Win The...
This is an unprecedented Six Nations campaign. For the first time we have an extra game being played [ ... ]
rugby
Six Nations: Last-Gasp France Try Cruelly Denies Wales Grand...
It promised to be a ‘Super Saturday’ unlike any other and it’s safe to say it delivered [ ... ]
rugby
England's Final Six Nations Game Against Ireland Is More Than...
You’d be forgiven for thinking England’s final Six Nations game against Ireland was a dead [ ... ]
rugby
Late Maro Itoje Try Gives England A Much-Needed Win Over France
England got back to winning ways in the Six Nations Championship by the finest of margins on Saturday [ ... ]
rugby
The Stats Don't Lie, Ill-Discipline Has Cost England The Six...
We’ve all seen the headlines. Too many mistakes and too many penalties have cost England in a [ ... ]
rugby
Alun Wyn Jones' Has Shown In The Six Nations Why He's A Lions...
146 caps, fifteen years of service and one cheeky smile, Alun Wyn Jones has been the beating heart of [ ... ]
rugby
Poor Officiating Puts Dampener On Wales Win Over England That...
Wales have kept their hopes of a Grand Slam alive, secured a bonus point and won the Triple Crown, with [ ... ]
rugby
England Need To Be Cool, Calm And Composed Against Wales In...
Eddie Jones is imploring his England side to be on the alert for any scheming from Wales captain Alun [ ... ]
rugby
France v Scotland Six Nations Game Called Off After Latest Positive...
France’s upcoming Six Nations match against Scotland, due to take place this Sunday, has been [ ... ]
rugby
Jack Nowell Aiming For England Recall When He Returns From Injury
England and Exeter winger Jack Nowell looks set to return to action in March after being sidelined for [ ... ]
rugby
Can Eddie Jones Really Blame A Lack Of Fans For England's Six...
England’s start to the Six Nations has been underwhelming to say the least. An opening day defeat [ ... ]
rugby
It Wasn’t Pretty But England Get Back On Track In The Six Nations...
It wasn’t pretty and wasn’t as easy as past England triumphs over Italy but Eddie Jones’ [ ... ]
rugby
How The Six Nations Has Become A Pivotal Moment In Eddie Jones'...
England’s shock defeat to Scotland last weekend certainly threw up more questions than answers [ ... ]
rugby
Six Nations Blown Wide Open With Scotland's First Win At Twickenham...
This year is different. How many times have we heard that over the last twelve months? The global pandemic [ ... ]
rugby
Eddie Jones' Mind Games Can Only Help To Fuel Scotland's Fire...
Eddie Jones has been at the mind games, but it feels like he needn’t really bother. Scotland arrive [ ... ]
rugby
Betfred Super League To Return Without Scrums Due To Covid-19...
The Betfred Super League season will begin without scrums following confirmation from the RFL board [ ... ]
rugby
Three Reasons Why England Winning The Six Nations Isn't A Foregone...
England go into the 2021 Six Nations in imperious form. The defending champions have finished outside [ ... ]
rugby
England’s Beno Obano And Maro Itoje Tackle Race In Rugby In...
Rugby Union has a race issue. It’s uncomfortable to talk about or even acknowledge but it’s [ ... ]
rugby
Hard Men Of Rugby, The Book That Revels In The Legendary Tough...
The famous maxim goes that 'football is a game for gentlemen played by hooligans, and rugby union [ ... ]
rugby
‘Rob Burrow: My Year With MND’ Is Emotional, Educational And...
“I’ve too many reasons to live. I’m not giving in ‘til my last breath.” [ ... ]
rugby
The Rugby Playing Ninja DJ, Welcome To The Many Lives Of James...
Sport, and rugby in particular, needs James Haskell. Brash, outspoken and at times just plain crackers, [ ... ]
rugby
Book Review - Pride And Passion By Warren Gatland
Halfway through this meaty autobiography, Warren Gatland, a confident and successful individual, comes [ ... ]
rugby
Book Review: Rory Best - My Autobiography
The last few years have been among the sunniest in the Ireland rugby team’s history. Yet [ ... ]
rugby
Eyewatering! 857 Million People Across The Globe Tuned In To...
Approximately 200 years ago, the world’s population was estimated at around 800 million people.  [ ... ]
rugby
Eddie Jones Admits ''I Don't Enjoy Coaching'' As Talks Linger...
Eddie Jones was not giving anything away when asked about his England future but did admit he doesn’t [ ... ]
rugby
New Look Wales Are Vulnerable To England's Intelligent Six Nations...
It’s no secret that, on their day, England have a power game to match most teams in world rugby. [ ... ]