Eddie Jones’ team selection for England v Ireland got a lot of headlines, with five locks and four centres in the matchday 23. As it turned out, the controversial selection came off, but what was more noticeable in the match itself is the way that lots of players were used in different ways, regardless of the number on their back.

In the non-stop race to get ahead of the competition, Jones is looking to squeeze every last drop out of his players — and not just when it comes to their fitness.

Jones has long demonstrated he isn’t that bothered about numbers or more orthodox ideas about positions. He has recently delighted in teasing the media with his suggestions that a fit Jack Nowell might play openside flanker, that Ben Curry could be a scrum half, or Ben Earl might become England’s newest centre.

But, if you look a bit closer at Jones’ comments (rather than the headlines), he wasn't actually planning to pick Nowell in the No7 jersey or Ben Curry at No9 (he might pick Earl in the backs but we’ll get to that).

Against Ireland, Tom Curry continued to act as a sweeper and also frequently worked as an auxiliary scrum half and George Kruis kicked a grubber (or tried). On the surface, this might seem like England are developing the sort of game plan that Wayne Pivac’s Wales are attempting, with forwards and backs seemingly interchangeable, at least in attack.

But Jones has always been very clear that he believes England should focus on their traditional strength. In his first squad announcement, he said that, “We want to have that real strong set-piece; dominant scrum, good lineout” and he hasn’t wavered on the opinion since.

This isn’t about England developing an attacking game plan that involves forwards offloading at will. It is about England maximising every opportunity on the field.

You can see this in other ways through Jones’ team selections. For instance, look at how many kicking options he likes to have in the team: frequently selecting three or even four of George Ford, Owen Farrell, Henry Slade, and Elliot Daly in his backline. Having kicking threats all over the park maximises your chances of breaking around, over, or through the opposition defence.

Likewise, having a team stacked with power runners is often derided as unsubtle but that many ball carriers in your team is a nightmare for opposition defences and therefore often extremely effective. 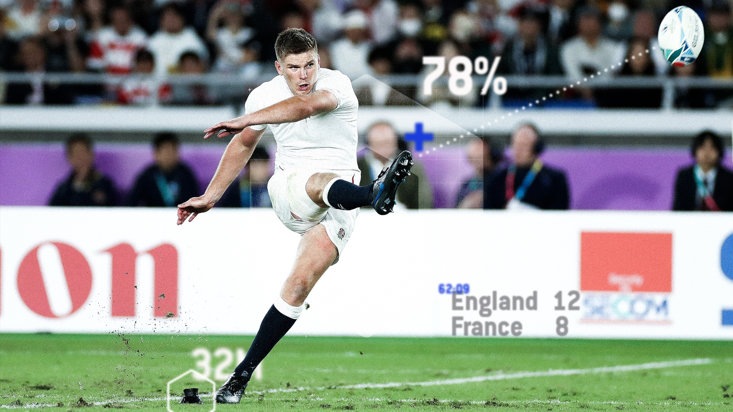 Demanding that players use their full skill sets is really just a logical extension of this, especially when you consider how important the breakdown, in particular has become — both in attack and defence. Getting your own ball at slightly quicker or slowing the opposition’s ball down because the nearest player, wherever play is on the field, is comfortable at the breakdown could become a lethal asset for a team.

Asking a fit Jack Nowell to use his strength and physique to be a more persistent threat in this area is perfectly sensible and wouldn’t be the first time a back has stepped up like that.

Similarly, having a flanker who is comfortable passing the ball away from the ruck reduces your reliance on a scrum half so you can always make the most of quick ball. England are already playing with two flankers who are good on the floor — maximising that strength further with various players comfortable stepping in at No9 is another logical extension of an existing strength.

Ben and Tom Curry are not the only flankers who could play this role but it seems both are in Jones’ mind to do so.

Multi-skilled forwards like Gethin Jenkins and Brodie Retallick have showed how dangerous it can be to have kicking and passing threats in the pack and, while Kruis is currently some way from their level, the fact that he felt emboldened to try a grubber against Ireland suggests Jones is encouraging his players to take every opportunity, whatever the orthodox ideas about their role might be.

And Jones also extends this approach to positional changes. When asked about Ben Earl training in the backs, he compared him with Levani Botia, the Fijian player who packs down at 6 for his country and 12 for his club.

Earl doesn’t have an elite level background in sevens, of course, as Botia does, but he wouldn’t be the first back rower to move to a centre position in the hope that his size and dynamism could add power to a team.

Whether we see Earl there or not, it seems certain that we will see Jones continue to look for every possible advantage to exploit with this England team.

x
Suggested Searches:
Tyson Fury
Manchester United
Marcus Rashford
Lewis Hamilton
F1
Air Jordan
More
rugby
Wales Win Six Nations Championship After Scotland's Late, Late...
Wales have regained the Six Nations Championship they last won in 2019 after France went down to a dramatic [ ... ]
rugby
Can History Repeat Itself? When Wales And France Shared The...
Wales are still favourites to win the Six Nations championship despite missing out on the Grand Slam [ ... ]
rugby
What Do Wales Need Scotland To Do Against France To Win The...
This is an unprecedented Six Nations campaign. For the first time we have an extra game being played [ ... ]
rugby
Six Nations: Last-Gasp France Try Cruelly Denies Wales Grand...
It promised to be a ‘Super Saturday’ unlike any other and it’s safe to say it delivered [ ... ]
rugby
England's Final Six Nations Game Against Ireland Is More Than...
You’d be forgiven for thinking England’s final Six Nations game against Ireland was a dead [ ... ]
rugby
Late Maro Itoje Try Gives England A Much-Needed Win Over France
England got back to winning ways in the Six Nations Championship by the finest of margins on Saturday [ ... ]
rugby
The Stats Don't Lie, Ill-Discipline Has Cost England The Six...
We’ve all seen the headlines. Too many mistakes and too many penalties have cost England in a [ ... ]
rugby
Alun Wyn Jones' Has Shown In The Six Nations Why He's A Lions...
146 caps, fifteen years of service and one cheeky smile, Alun Wyn Jones has been the beating heart of [ ... ]
rugby
Poor Officiating Puts Dampener On Wales Win Over England That...
Wales have kept their hopes of a Grand Slam alive, secured a bonus point and won the Triple Crown, with [ ... ]
rugby
England Need To Be Cool, Calm And Composed Against Wales In...
Eddie Jones is imploring his England side to be on the alert for any scheming from Wales captain Alun [ ... ]
rugby
France v Scotland Six Nations Game Called Off After Latest Positive...
France’s upcoming Six Nations match against Scotland, due to take place this Sunday, has been [ ... ]
rugby
Jack Nowell Aiming For England Recall When He Returns From Injury
England and Exeter winger Jack Nowell looks set to return to action in March after being sidelined for [ ... ]
rugby
Can Eddie Jones Really Blame A Lack Of Fans For England's Six...
England’s start to the Six Nations has been underwhelming to say the least. An opening day defeat [ ... ]
rugby
It Wasn’t Pretty But England Get Back On Track In The Six Nations...
It wasn’t pretty and wasn’t as easy as past England triumphs over Italy but Eddie Jones’ [ ... ]
rugby
How The Six Nations Has Become A Pivotal Moment In Eddie Jones'...
England’s shock defeat to Scotland last weekend certainly threw up more questions than answers [ ... ]
rugby
Six Nations Blown Wide Open With Scotland's First Win At Twickenham...
This year is different. How many times have we heard that over the last twelve months? The global pandemic [ ... ]
rugby
Eddie Jones' Mind Games Can Only Help To Fuel Scotland's Fire...
Eddie Jones has been at the mind games, but it feels like he needn’t really bother. Scotland arrive [ ... ]
rugby
Betfred Super League To Return Without Scrums Due To Covid-19...
The Betfred Super League season will begin without scrums following confirmation from the RFL board [ ... ]
rugby
Three Reasons Why England Winning The Six Nations Isn't A Foregone...
England go into the 2021 Six Nations in imperious form. The defending champions have finished outside [ ... ]
rugby
England’s Beno Obana And Maro Itoje Tackle Race In Rugby In...
Rugby Union has a race issue. It’s uncomfortable to talk about or even acknowledge but it’s [ ... ]
rugby
Hard Men Of Rugby, The Book That Revels In The Legendary Tough...
The famous maxim goes that 'football is a game for gentlemen played by hooligans, and rugby union [ ... ]
rugby
‘Rob Burrow: My Year With MND’ Is Emotional, Educational And...
“I’ve too many reasons to live. I’m not giving in ‘til my last breath.” [ ... ]
rugby
The Rugby Playing Ninja DJ, Welcome To The Many Lives Of James...
Sport, and rugby in particular, needs James Haskell. Brash, outspoken and at times just plain crackers, [ ... ]
rugby
Book Review - Pride And Passion By Warren Gatland
Halfway through this meaty autobiography, Warren Gatland, a confident and successful individual, comes [ ... ]
rugby
Book Review: Rory Best - My Autobiography
The last few years have been among the sunniest in the Ireland rugby team’s history. Yet [ ... ]
rugby
Eyewatering! 857 Million People Across The Globe Tuned In To...
Approximately 200 years ago, the world’s population was estimated at around 800 million people.  [ ... ]
rugby
Eddie Jones Admits ''I Don't Enjoy Coaching'' As Talks Linger...
Eddie Jones was not giving anything away when asked about his England future but did admit he doesn’t [ ... ]
rugby
New Look Wales Are Vulnerable To England's Intelligent Six Nations...
It’s no secret that, on their day, England have a power game to match most teams in world rugby. [ ... ]
rugby
Huge Fall In Concussions At Rugby World Cup After Successful...
Rugby’s new high-tackle rule saw a huge decrease in concussion incidents at last year’s [ ... ]
rugby
England Channelled Their Inner Tyson Fury To Pummel Ireland...
Onslaught. According to the Oxford English Dictionary, the definition is: “an onset, assault, [ ... ]