Eddie Jones has been at the mind games, but it feels like he needn’t really bother. Scotland arrive at Twickenham for the beginning of their Six Nations Campaign on Saturday hoping to win at England’s rugby union HQ for the first time since 1983. So it’s not like the Scottish players need reminding that they rarely manage to get anything against their oldest of enemies.

“For Scotland it is the most important game of the year. They talk about it all the time,” the England coach told reporters this week. “But Scotland don’t have a monopoly on pride. Our players get an opportunity to play in this historic game and they are going to be ready for it.

“You listen to the Scottish and how much it means to them – it’s their biggest game of the year, their most important game, they are playing for trophies. That’s a huge expectation for them and maybe, with 15 minutes to go in the game, the expectation is going to get pretty heavy for them.”

The Calcutta Cup being held aloft by skippers in white has become a near-annual sight, so it’s not as though Scotland players need any extra chat about the pressure they will feel – even in an empty stadium – simply from representing the saltire against England. On their last visit to Twickenham in 2019 they turned in a phenomenal rear-guard display, overturning a 31-0 deficit to lead 38-31 late on before being pegged back to draw 38-38. Perhaps that is what Jones is thinking of when he talks about the expectation in the last 15 minutes, but there is a very different type of expectation on his own troops. 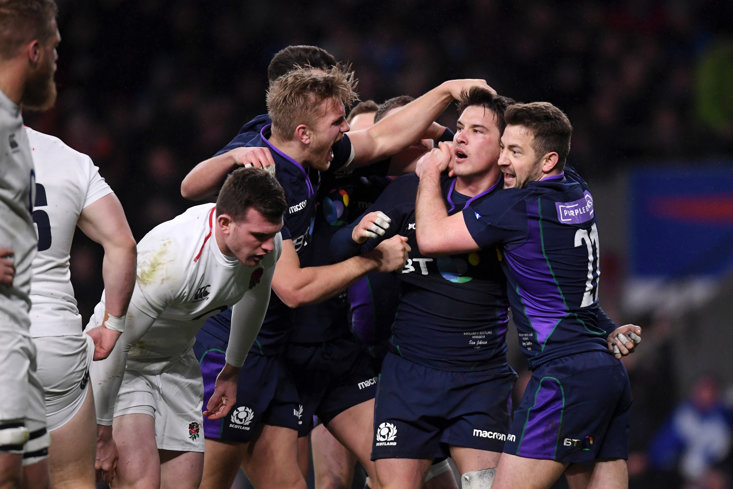 You see, England are evens favourites with Betfred to lift the Six Nations Championship for a second consecutive season. They are joint second-favourites to win the 2023 Rugby World Cup at 4/1. Right now, they are considered among rugby union’s elite, and so anything that is not a convincing win will be debated and scrutinised for weeks to come, especially against a Scotland side which has so little form in Calcutta Cup contests.

Maybe it was just Eddie’s way of reminding his players that there is always a need to be 100 per cent focused and that they have to play with pride every bit as much as the Scots, but Jones’ words might prove to be all the motivation Scotland need to put in that extra 10 per cent in the big moments on Saturday.

England could well go into this one undercooked, with Owen Farrell, Jamie George, Maro Itoje and Elliot Daly having not made a single appearance between them for club or country since the Red Rose won the Autumn Nations Cup due to Saracens’ recent lack of fixtures.

And with Cameron Redpath set to make his Scotland debut against the country which called him up for multiple squads without handing him a cap, there will be personal scores to settle for the visitors too.

England, of course, are the big favourites. But Scotland need no added motivation – from Eddie Jones or anyone else – to end 38 years of Twickenham pain.

x
Suggested Searches:
Manchester United
Liverpool
Manchester City
Marcus Rashford
Premier League
More
rugby
Alun Wyn Jones To Captain British & Irish Lions On South Africa...
Wales legend Alun Wyn Jones will captain the British and Irish Lions squad ahead of their tour in South [ ... ]
rugby
England Dig Deep Against France To Claim Fourth Six Nations...
It wasn’t pretty but England got the job done, beating France 10-6 in a gripping low-scoring classic [ ... ]
rugby
Eddie Jones' 2021 Failures Could Set England Up For World Cup...
After a review by the RFU into England’s woeful Six Nations performance, Eddie Jones has kept [ ... ]
rugby
Wales Win Six Nations Championship After Scotland's Late, Late...
Wales have regained the Six Nations Championship they last won in 2019 after France went down to a dramatic [ ... ]
rugby
Can History Repeat Itself? When Wales And France Shared The...
Wales are still favourites to win the Six Nations championship despite missing out on the Grand Slam [ ... ]
rugby
What Do Wales Need Scotland To Do Against France To Win The...
This is an unprecedented Six Nations campaign. For the first time we have an extra game being played [ ... ]
rugby
Six Nations: Last-Gasp France Try Cruelly Denies Wales Grand...
It promised to be a ‘Super Saturday’ unlike any other and it’s safe to say it delivered [ ... ]
rugby
England's Final Six Nations Game Against Ireland Is More Than...
You’d be forgiven for thinking England’s final Six Nations game against Ireland was a dead [ ... ]
rugby
Late Maro Itoje Try Gives England A Much-Needed Win Over France
England got back to winning ways in the Six Nations Championship by the finest of margins on Saturday [ ... ]
rugby
The Stats Don't Lie, Ill-Discipline Has Cost England The Six...
We’ve all seen the headlines. Too many mistakes and too many penalties have cost England in a [ ... ]
rugby
Alun Wyn Jones' Has Shown In The Six Nations Why He's A Lions...
146 caps, fifteen years of service and one cheeky smile, Alun Wyn Jones has been the beating heart of [ ... ]
rugby
Poor Officiating Puts Dampener On Wales Win Over England That...
Wales have kept their hopes of a Grand Slam alive, secured a bonus point and won the Triple Crown, with [ ... ]
rugby
England Need To Be Cool, Calm And Composed Against Wales In...
Eddie Jones is imploring his England side to be on the alert for any scheming from Wales captain Alun [ ... ]
rugby
France v Scotland Six Nations Game Called Off After Latest Positive...
France’s upcoming Six Nations match against Scotland, due to take place this Sunday, has been [ ... ]
rugby
Jack Nowell Aiming For England Recall When He Returns From Injury
England and Exeter winger Jack Nowell looks set to return to action in March after being sidelined for [ ... ]
rugby
Can Eddie Jones Really Blame A Lack Of Fans For England's Six...
England’s start to the Six Nations has been underwhelming to say the least. An opening day defeat [ ... ]
rugby
It Wasn’t Pretty But England Get Back On Track In The Six Nations...
It wasn’t pretty and wasn’t as easy as past England triumphs over Italy but Eddie Jones’ [ ... ]
rugby
How The Six Nations Has Become A Pivotal Moment In Eddie Jones'...
England’s shock defeat to Scotland last weekend certainly threw up more questions than answers [ ... ]
rugby
Six Nations Blown Wide Open With Scotland's First Win At Twickenham...
This year is different. How many times have we heard that over the last twelve months? The global pandemic [ ... ]
rugby
Betfred Super League To Return Without Scrums Due To Covid-19...
The Betfred Super League season will begin without scrums following confirmation from the RFL board [ ... ]
rugby
Three Reasons Why England Winning The Six Nations Isn't A Foregone...
England go into the 2021 Six Nations in imperious form. The defending champions have finished outside [ ... ]
rugby
England’s Beno Obano And Maro Itoje Tackle Race In Rugby In...
Rugby Union has a race issue. It’s uncomfortable to talk about or even acknowledge but it’s [ ... ]
rugby
Hard Men Of Rugby, The Book That Revels In The Legendary Tough...
The famous maxim goes that 'football is a game for gentlemen played by hooligans, and rugby union [ ... ]
rugby
‘Rob Burrow: My Year With MND’ Is Emotional, Educational And...
“I’ve too many reasons to live. I’m not giving in ‘til my last breath.” [ ... ]
rugby
The Rugby Playing Ninja DJ, Welcome To The Many Lives Of James...
Sport, and rugby in particular, needs James Haskell. Brash, outspoken and at times just plain crackers, [ ... ]
rugby
Book Review - Pride And Passion By Warren Gatland
Halfway through this meaty autobiography, Warren Gatland, a confident and successful individual, comes [ ... ]
rugby
Book Review: Rory Best - My Autobiography
The last few years have been among the sunniest in the Ireland rugby team’s history. Yet [ ... ]
rugby
Eyewatering! 857 Million People Across The Globe Tuned In To...
Approximately 200 years ago, the world’s population was estimated at around 800 million people.  [ ... ]
rugby
Eddie Jones Admits ''I Don't Enjoy Coaching'' As Talks Linger...
Eddie Jones was not giving anything away when asked about his England future but did admit he doesn’t [ ... ]
rugby
New Look Wales Are Vulnerable To England's Intelligent Six Nations...
It’s no secret that, on their day, England have a power game to match most teams in world rugby. [ ... ]