It ended up being a threat more than a promise, but Eddie Jones' decision to name six forwards on his bench for the Six Nations Championship win over Scotland on Saturday spoke volumes about a very clear lesson learned from England's Rugby World Cup final defeat to South Africa in November.

Like most coaches, Jones generally likes a five-three split between forwards and backs on his bench. In fact, the Calcutta Cup game this weekend was only the fifth time in 52 games he has opted for a six-two bench. Scotland’s forwards embarrassed Ireland in their Round 1 match but, even without Billy Vunipola, England have some of the best forwards in world rugby. So why did Eddie take such an unusual step?

It possibly, probably, in fact almost certainly, has something to do with South Africa’s approach in the World Cup and the employment of their so-called ‘Bomb Squad’.

Earlier on in the tournament, South Africa head coach Rassie Erasmus had gone with a more conventional five-three split but, by the time they played Japan in the quarter-finals, he had decided to go all-in on his forwards and stuck to the policy throughout the rest of the tournament. After 40-50 minutes of giving it everything and softening up the opposition he sent on six replacement forwards to maintain the physical onslaught. First Japan, then Wales, then England fell to this unsubtle but extremely effective approach. Afterwards, three of the Springbok forwards had 'Bomb Squad' tattoos on their hips so influential a tactic did it prove to be.

South Africa’s forward-based approach clearly had an impact on Jones’ thinking because one of the first moves he made as England coach after the final was to hire Matt Proudfoot, the man who oversaw the 'Bomb Squad', to take over England’s pack.

In their Round 1 defeat to France, England’s forwards imitated another one of South Africa’s moves, trying to set up an in-field maul to make territory in the French half and milk a penalty. Unfortunately, that didn’t work. Their second attempt to transplant the 'Bomb Squad' via Proudfoot involved the six-two bench split and, arguably, that went much better. It was the power of England’s forwards, in the scrum and then driving over the line, that led to substitute loosehead prop Ellis Genge’s match-winning try. The Man of the Match was Sam Underhill, who had emptied his tank impressively before going off after 66 minutes. 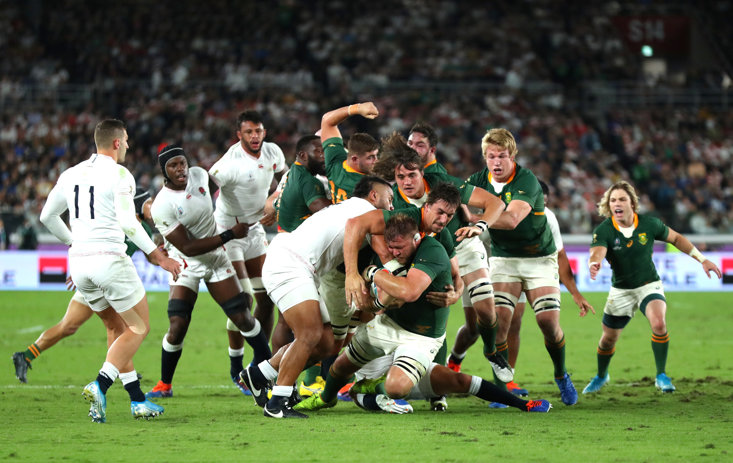 So can we expect more of this in the future from England? There are two caveats to the success of this experiment that need to be considered. Firstly, the weather in Edinburgh was terrible. The conditions were almost unplayable and that had been expected.

In heavy wind and rain, a forward-based game plan is essential. If you have six forwards of the quality that England do, it makes perfect sense to stack the bench with them in weather like that. That is particularly true when you have backs as versatile as Owen Farrell and Elliot Daly and so need less cover but both France and Italy also opted for a six-two split on their respective benches this weekend.

There’s a theme there of inexperienced players, of course, and Jones’ desire not to risk such a close game by asking them to come on, at Murrayfield, in the centre of a storm, is understandable. But it does mean that he only used four of his six available forwards to win the match. Still, the intention was clear, the threat was there. England were prepared to outmuscle Scotland from start to finish. That they only needed four of the six forward substitutes available says less about Jones's and England's tactical approach than does the initial team list. If there's a need to go big, they will do it.

Whether England will continue with this tactic is up for debate, but, like South Africa, they certainly have the personnel for it. And, having added the Springboks’ former forwards coach and tried one of their moves last week, it seems like they will continue to take inspiration from South Africa. It might not always be with their own personal ‘Bomb Squad' but they proved on Saturday that it is a string they could add to their bow.