All eight matches of the fourth round of the NRL season have been run and won and fans were saved the best until last with the Wests Tigers nearly upsetting Parramatta in a thriller on Monday before the Eels finished strong to seal the win.

Parramatta had to fight off a late Wests Tigers’ resurgence to win their third Easter Monday game in a row with a 36-22 victory at Stadium Australia.

The Eels had been cruising with a 14 point lead going into the second half but the home side stormed back into the game with two tries, courtesy of Adam Doueihi and Jacob Liddle, making it a two-point game with seven minutes remaining and setting up a grandstand finish. Fortunately for Parramatta, Blake Ferguson and Clint Gutherson crossed late to secure the side's fourth win from four.

Elsewhere, a sensational Ryan Papenhuyzen helped pile more misery on the Broncos on Friday, scoring four tries in just 11 minutes as Melbourne Storm eased to a 40-6 victory, condemning Brisbane to their third defeat in four ahead of a tough trip to Rabbitohs on Thursday. Pap finished the night with 292 metres, 10 tackle breaks and 26 points, the second most by a Storm player in a match in more than 20 years. 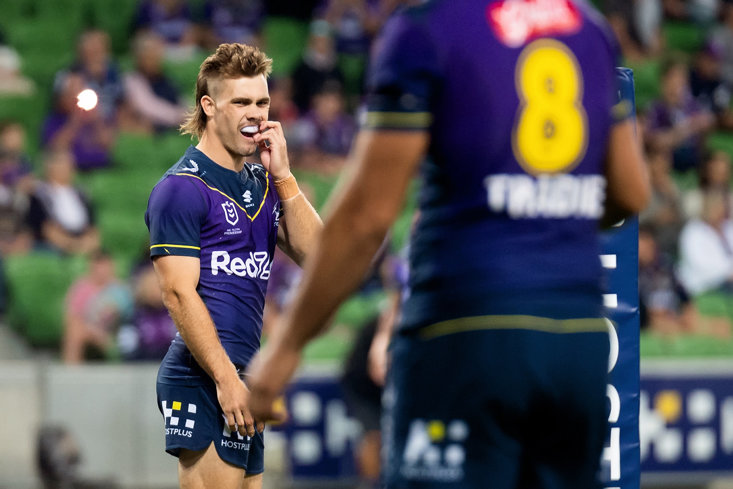 On Thursday night, top of the ladder Panthers were ruthless in putting a sorry Sea Eagles to the sword with a comprehensive 46-6 win at Lottoland. The 40-point loss is Manly's biggest ever at their home ground, while Penrith have now won their opening four games for the first time since 1997.

In the fourth round’s other ties, it was another week to forget for Canterbury-Bankstown Bulldogs, who were thumped 38-0 by South Sydney, and have now failed to score a point for three consecutive games, becoming just the second team to go four hours without scoring. It is Canterbury’s worst start to a season in 50 years.

On Saturday, The Sharks overcame the loss of centre Josh Dugan and winger Ronaldo Mulitalo to inflict a 48-10 defeat on North Queensland at Netstrata Jubilee Stadium, while the Raiders produced an excellent defensive performance to beat the Titans 20-4.

In Sunday’s games, Newcastle Knights were dealt a bruising loss in more ways than one as they were beaten 22-13 by St George Illawarra at McDonald Jones Stadium. The Knights were handed a triple-injury blow - losing playmakers Mitchell Pearce, Kurt Mann and Tex Hoy to injury - which gives Adam O’Brien a team selection headache ahead of next week’s tie against Gold Coast.

Last but not least, the Roosters dominated the Warriors 32-12 but it’s 18-year-old Roosters halfback Sam Walker who will take most of the headlines, making an ultra-composed debut that saw him have four linebreak assists, two try assists and a goal after replacing Luke Keary, who is out for the season with an ACL injury.