Football
News
It was heartbreak for the Glaswegians after a 1-1 draw in Seville
Simon Lillicrap
23:13, 18 May 2022

Rangers suffered the ultimate heartbreak in Seville as they lost the Europa League final on penalties to Eintracht Frankfurt. Aaron Ramsey missed the only spot-kick of the shootout and it turned out to be a gut-wrenching miss after a 1-1 draw in normal time.

Everything on the night felt like it was going Rangers’ way and they seemed destined to win the title, but that just made the defeat even more hard to swallow. Calvin Bassey was phenomenal, Joe Aribo put them 1-0 in front with a cool finish and their fans gave it their all. Yet, it was Rafael Borre who stole the headlines, first bagging the equaliser and then blasting the winning penalty past Allan McGregor.

Giovanni van Bronckhorst’s side have done themselves incredibly proud on this run, but it wasn’t their night. They had a major chance to win it through Ryan Kent at the end of extra-time, but in the stifling heat of Seville, it was Frankfurt who won their first Europa League since 1980.

The day started with such promise from a Rangers point of view. With 100,000 fans reportedly in Spain, Seville was alive with anticipation. The tifo of Frankfurt set the tone for a passionate night in the Estadio Ramon Sanchez Pizjuan, it cost £50,000 and was driven in six trucks from Poland to southern Spain.

On a hot night in Seville with the temperature around 31C at kick-off, both sides attempted to stamp their mark on this final. John Lundstram nearly took that too literally as he fortunately escaped from a high boot challenge that caught Sebastien Rode’s head without a caution.

Ansgar Knauff took advantage of some Rangers’ indecision but saw his effort tipped past the post by McGregor. The Germans certainly took the initiative in the opening moments but a cooling break in the frying pan of Europe was much needed given the searing heat. James Tavernier’s constant battle with Kostic, both offensively and defensively, felt as if it would be title-defining.

The Gers improved as the first period went on, Ryan Jack fired over from outside the box as they pushed on but they went in at the break all square.

As the flares and smoke went off in the Frankfurt end, Rangers wilfully defended their goal that was under siege. The clouds of smoke that billowed from that of the stadium are the only clouds this part of the world sees during the summer months.

A deflected shot bobbled wide of McGregor’s post before Borre went down under the challenge of Conor Goldson but nothing was given. This was a stressful start to the second half but Rangers had a chance of their own as Aribo teed up Ryan Kent who sliced his effort wide. 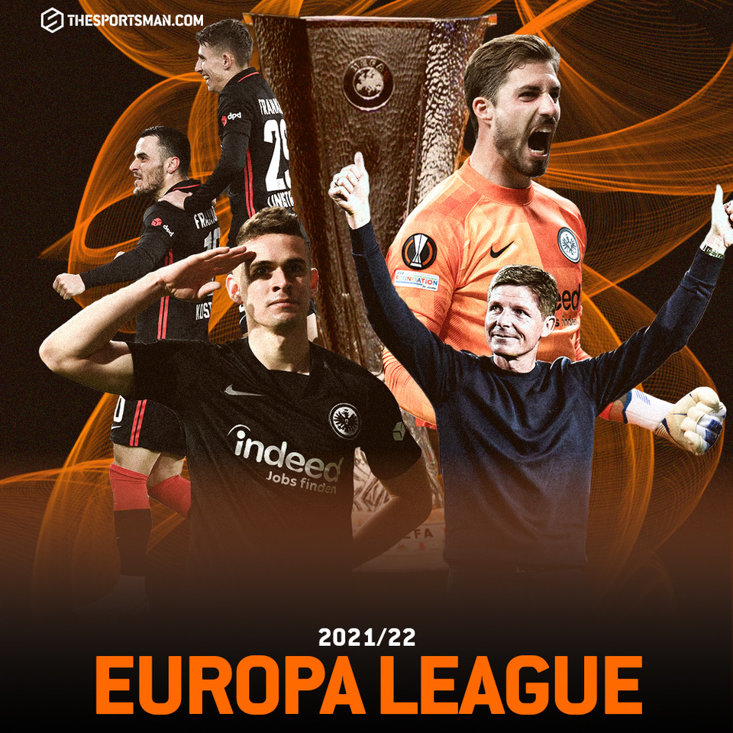 Minutes later, they’d be handed their golden opportunity. Frankfurt defender Tuta tripped himself up when chasing back and Aribo took full advantage as he slid the ball past Kevin Trapp with that trusty left foot.

Van Bronckhorst's side gave up an opportunity of their own as Daichi Kamada lifted the ball over McGregor but also over the bar when he had a golden chance to finish. But Frankfurt would level the scores thanks to their Colombian striker Borre. Kostic fizzed a low cross into the box and Borre dived in to steer the ball home.

It was a cross that should have been stopped from coming in, and then should have been cleared in the box, but these sort of errors are so costly in finals. All of a sudden, this game that was in Rangers’ control was up in the air.

Kostic fizzed one wide of the post as the game approached extra-time and the temperature finally dipped below 30 C as the referee brought an end to the 90 minutes. It was hot. It was sweaty. It was nervy.

Bassey was imperious at the back for Rangers, winning challenge after challenge as he marshalled the back line but he made a mistake as he slipped to put Borre in, before sprinting back to make a goal-saving recovery. It was a tackle that summed up his performance, one played with maturity way beyond his 22 years of age.

Barisic hit a powerful effort towards goal before Frankfurt substitute Ajdin Hrustic fired one wide of McGregor’s goal. Both sides were pushing in the tense cauldron of noise and Fashion Sakala’s pace was a dangerous weapon. 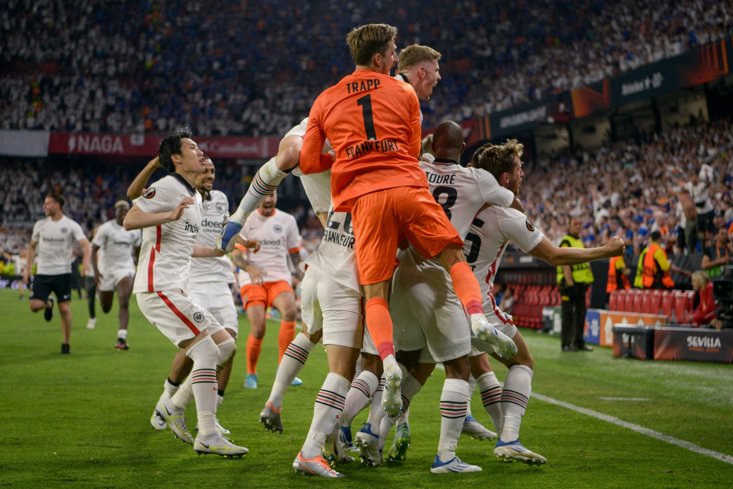 After a double sub that saw Aaron Ramsey and Kemar Roofe introduced, Rangers almost found the winner. Trapp pulled off an outrageous save from six yards from Ryan Kent, before Steven Davis’ effort was headed over the bar.

But penalties were needed for the second year in a row in the Europa League final. Taken at the Rangers end, with Rangers taking first. James Tavernier, so reliable from the spot, scored the opener before Frankfurt levelled. Davis picked out the top corner, Hrustic kept his cool. Scott Arfield belted his penalty home, Kamada replied with a perfect penalty of his own. 3-3.

Then Aaron Ramsey stepped up, fresh off the bench and saw his penalty saved by Trapp’s feet. It was down the middle, it was weak, it was stopped. Kostic made no mistake as he found the corner with his penalty to give the Bundesliga side match point. Kemar Roofe nailed his penalty under pressure but it was left to Borre to win the tie. He fired his penalty home and the life was sucked from the Rangers’ end.

It was the most brutal way to end this magical journey.