The questions asked about the signing of Aaron Ramsdale feel faintly ridiculous now. His world class performance against Leicester City today kept them in the game, as the Foxes responded valiantly to going 2-0 down. Today’s game was the former Bournemouth keeper’s fourth clean sheet in seven Premier League games, and he is yet to lose a league game in an Arsenal shirt. You cannot rely on a top keeper to bail you out every week, but Ramsdale has proved himself worthy of his status as Arsenal’s number one.

Arsenal raced out of the blocks with a relentless press, led by the veteran duo of Alexandre Lacazette and Pierre-Emerick Aubameyang. This approach bore fruit early on, with Arsenal winning a corner that Gabriel turned in to open the scoring. The centre-back out-jumped Jamie Vardy, turning mid-air to steer the ball past Kasper Schmeichel.

Leicester could not settle in the early going, as Arsenal chased them down in possession. Aubameyang dispossessed Daniel Amartey before putting a shot straight at Schmeichel.  Bukayo Saka picked Caglar Soyuncu’s pocket before pulling back for Thomas Partey, whose shot was well-saved. When a Nuno Tavares run carved the Foxes open and ended with a blocked Lacazette cross, you got the idea Arsenal could run up a cricket score.

The Gunners fired themselves further in front through the excellent Emile Smith Rowe. Lacazette was snuffed out in the box, but the Leicester defence got caught ball-watching and were powerless to stop Smith Rowe hammering the loose ball home. Brendan Rodgers’ men had a mountain to climb from here. 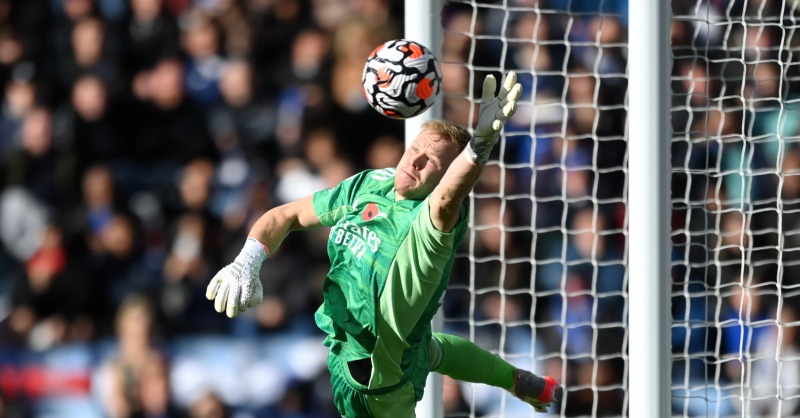 Leicester responded, easing their way back into proceedings by getting on the front foot. Youri Tielemans lifted a dangerous looking ball over the Arsenal defence that Iheanacho didn’t read in time. Then Aaron Ramsdale pulled off the first of a litany of world-class saves that would see him deservedly crowned man of the match, clawing a James Maddison free kick onto the bar.

Rodgers shuffled his deck at half-time, switching to a four-man defence and replacing Daniel Amartey and Kelechi Iheanacho with Harvey Barnes and Ademola Lookman. The stylistic adjustment worked, with the home side enjoying a much better second half. As Arsenal found themselves pinned back, Leicester seemed to get the bit between their teeth. Vardy pulled back a cross that Barnes dragged wide. Luke Thomas nipped inside on the left flank and sent a shot just wide of the far post.

Ramsdale was the standout performer, turning back chance after chance as the blue wave of Leicester swept forward. Vardy, Barnes and Lookman all went close. His near-post block of the latter was his best save of the second half, though his efforts in the first half eclipsed it.

Ultimately, the diligence of their keeper rescued a game that slipped away from Arsenal. This most sparkling of clean sheets protected the two-goal lead they built in an excellent first half an hour. Manager Mikel Arteta can be pleased with a lot of what he’s seen this afternoon, but must take steps to prevent his team being marginalised the way they were in the second half.