Alongside the various PR difficulties at Wimbledon on Saturday, there was a magnificent and towering performance from the 23-year-old Elena Rybakina of Kazakhstan to claim a first grand slam title in the women’s final – achieved with a superb comeback from a set down against Tunisian trailblazer Ons Jabeur to prevail 3-6, 6-2, 6-2.

And so it came to pass that in the tournament that banned all Russian and Belarusian players so as not to risk Vladimir Putin’s Russia regime – that invaded Ukraine this year and remains engaged in a terrible war in that country - from gaining any kudos from trophies being presented to any of their athletes, the Duchess of Cambridge had to hand over the Venus Rosewater to the Russian-born No17 seed Rybakina.

The worthy winner, who took the Kazakhstan nationality on offer four years ago in return for substantial financial support as she battled to make her way on tour, is known for her low-key, almost non-existent celebrations and the winning point was as usual barely acknowledged, despite the supreme magnitude of her achievement.

The No3 seed did all she could against the bombardment, ceding up to 15-20mph on first serve alone, and persisted with her trademark drop shots despite seeing Rybakina athletically chase a few of them down. But there was no denying Rybakina – a player whose time had come, and you have to think there will be more days like this in the years ahead.

Rybakina, who dealt with some very awkward questions about her Russian roots as comfortably as Jabeur in the last two sets, said: “It is a fairytale, and hard to describe – but I will remember these two weeks forever, they are something I will never forget. I think I will really start to enjoy this tomorrow, when it has all calmed down. I still can’t believe it.

A delayed climb up to the players’ box, a tradition first started by Pat Cash in 1987, was almost an afterthought. And her Russian parents, who she correctly thanked “because without them I wouldn’t be here”, were unsurprisingly not present. Neither were the parents of the 27-year-old Jabeur – unable to procure visas in time to see their daughter, the first Arab and African woman ever to reach a grand slam final, on her biggest day.

But at least Rybakina’s sister was present, as well as the gleeful President of the Kazakhstan tennis federation, whose sizeable punt in funding the player’s early years on tour had landed in style.

After a first set in which the guile, elegance and grace of Jabeur as she mixed up her top-spin and slice was all too much for a nervy Rybakina. But the Kazakhstan player generates huge power from her height and long arms, and as soon as they started firing that pushed Jabeur further and further back as the second set wore on.

“I have never done a big celebration, I'm always very calm. I don't know what should happen! I didn't know what to do. It was shocking. I don't know, maybe because I believe that I can do it deep inside. When I was giving speech in the end I was thinking, ‘I'm going to cry right now’, but somehow I held it together. I have no idea how I am going to celebrate tonight – this was so unexpected.”

Asked she was concerned about Russia trying to use her win for propaganda, and if she condemned the war, she said: “I'm playing for Kazakhstan for a very, very long time. I represented them in the biggest tournaments, including the Olympics. I don't know what's going to happen, and I cannot do anything about this. From my side I can only say that I'm representing Kazakhstan. I didn't choose where I was born.”

But Rybakina did break down when asked if her parents would be proud, sobbing: “You wanted some emotion…” 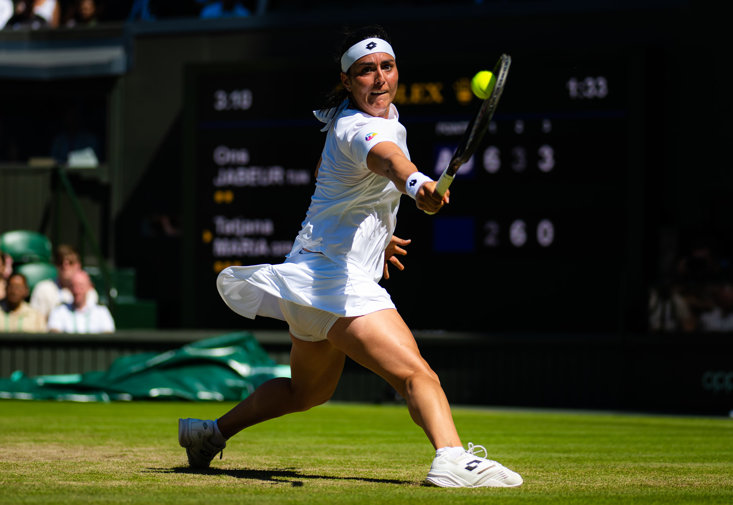 It was rare to see the irrepressible Jabeur - known as the ‘Minister of Happiness’ back home in Tunisia - so deflated on court after seeing such a huge chance pass her by, though in truth it was snatched from out of her grasp. But her sense of humour had returned by the press conference.

After a Championships that see her depart the UK with far more admirers and fans than when she arrived, Jabeur said: “I have a picture of this trophy as a screensaver on my phone – but it wasn’t meant to be.

“It is frustrating to play someone that serves really big and doesn't give you the chance sometimes to take that break. I just telling myself ‘This is not over, I trust you’. I even said ‘I love you’, to myself during the match.

“I think Elena does react little bit, you have to look. But it's nice to play her, to be honest with you. Even when you lose against her, she didn't do any big celebration or anything. I need to teach her how to celebrate really good! Maybe because she's shy and she doesn't show her personality. But I think her game speaks for her.

“I didn't play my best tennis in the second and third sets. She started to be more aggressive and put a lot of pressure on me. I didn't find a solution for that, unfortunately. She played really well, and deserved to win. But overall in the tournament I am definitely positive about it, and thank all those who supported me. People were even shouting ‘Happy Eid’ when I was serving!

“I'm very glad with my results, I don't regret anything and I gave it all today. And I am happy again already, I am always happy. Like Bob Marley said – ‘Don’t worry, be happy!’”

On a Centre Court bathed in sunshine Jabeur did have fleeting chances to get right back in the match and halt the Rybakina momentum. The biggest of those came after she got 0-40 on her opponent’s huge serve at 2-3 in the third and deciding set…but Rybakina somehow escaped. It felt like the decisive blow, and so it proved.