Horse Racing
News
A number of Cheltenham contenders have been moved to new yards after this week's controversy
Matt Hulmes
14:45, 02 Mar 2021

The fallout continues from the scandal engulfing Gordon Elliott, with some of the yard's leading horses having now been transferred to other leading stables in Ireland.

Twenty-four hours after receiving the support of his leading patron Michael O’Leary of Gigginstown House Stud, Cheveley Park Stud have removed their eight horses from Cullentra House Stables and spilt them between Henry De Bromhead and Willie Mullins.

De Bromhead will take charge of the highest-profile runner, the unbeaten and exciting Envoi Allen (Marsh Novices’ Chase) as well as other Cheltenham contenders Ballyadam (Supreme) and Quilixios (Triumph/Boodles), while Mullins strengthens his stronghold on the Champion Bumper with the acquisition of second favourite Sir Gerhard.

The news follows the emergence of an image of Elliott sat atop a deceased horse on his gallops at his Co. Meath base, taken some years ago.

The trainer admitted the image’s authenticity on Sunday evening in a statement, and subsequently further footage has emerged of leading amateur rider Rob James in a similar act at a different yard. James, who rode a Cheltenham Festival winner for Elliott last year has also apologised for the distasteful actions.

There will be plenty more details to emerge as the IHRB (Irish racing's governing body) continues its investigation into this unsavoury incident, with it now having announced that a hearing will take place on Friday by the referrals committee. 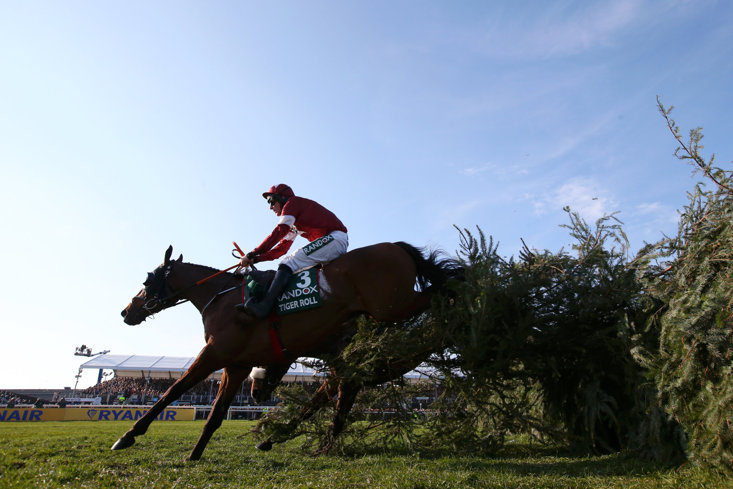 The transfers come as another blow to Elliott, whose dual-Grand National hero Tiger Roll was ruled out of his hat-trick bid next month by his owners due to receiving an ‘unfair weight’ from the race's handicapper.

In a statement released this morning by Gigginstown, they said: “We made clear that if Tiger Roll was rated in the 150s which is what his form and age now warrants, he would be allowed to run in this year’s National and go for a historic three in a row.

"However, the handicapper has decided to rate him on his reputation rather than his form – which we fully accept is his prerogative – but we have a duty of care to Tiger, and so we will not ask him to carry an unfair weight burden especially as he gets older and his form declines.

“We therefore regret to announce that Tiger Roll will be removed from the Grand National entries at Tuesday’s forfeit stage. We hope he will run next as planned in the cross-country race at Cheltenham, where we hope he will enjoy himself and run well.

“After that, we will consider his future wellbeing, which may involve retirement if his handicap mark is not adjusted to more fairly reflect his age and form over the past two seasons.”

The withdrawal of Tiger Roll leaves Cloth Cap and Burrows Saint as Betfred's 14/1 joint favourites for the Grand National on Saturday 10 April.