It was shambolic, painful, embarrassing and everything in between. But more than anything it was entirely predictable.

When Paul Scholes took the opportunity to accentuate the long-term concerns over the elation of a late comeback victory over Atalanta on Wednesday, some saw him as a grumpy old fart. In truth he was a Manchester United fan who could see the inevitable on the horizon.

“The first half really worried me,” Scholes told BT Sport after United had come from 2-0 down to win 3-2 in the Champions League at Old Trafford. “Go and do that against Liverpool on Sunday, see what happens… If you do that against Manchester City or Liverpool, at half-time it will be three or four-nil.”

As Scholes predicted, it was 4-0 at half-time. And it didn’t stop there. And Liverpool didn’t really have to play at their peak to earn a never-to-be-forgotten 5-0 win at the Theatre of Dreams.

It is a defeat which will take a long time for Manchester United to live down. Moreover, it will forever be remembered for its context in Ole Gunnar Solskjaer’s reign as United manager.

The Norwegian has been under pressure for weeks now due to his inability to find a coherent balance in his starting XI. Some of the goals United have conceded over a long period of time, going back even as far as their away defeat to Istanbul Basaksehir last autumn, have been absolute eyesores. And things have only got worse since the club decided to re-sign Cristiano Ronaldo and throw in a hand grenade Solskjaer was only too pleased to run towards.

Ronaldo’s introduction in the summer has only thrown another undroppable attacker into the equation, with Solskjaer flat-out refusing to add a much-needed third midfielder into his starting XI. When United decided to sign the Portuguese instead of the disciplined engine-room occupant they really needed, this eventuality was never going to be far from the surface. 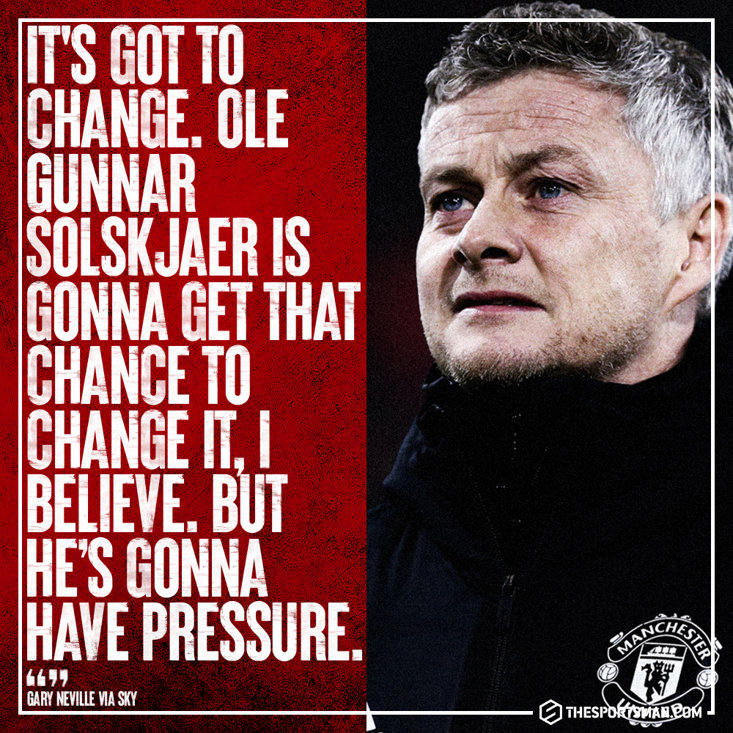 The shambles that was United’s defending made it far too easy for Jurgen Klopp’s side. This result was not about Liverpool’s brilliance, much as that was occasionally on display. This was all about just how bad United were. They parted like the red sea for Mo Salah to tee up Naby Keita’s opener then repeated the dose for Trent Alexander-Arnold to cross for Diogo Jota to make it two after 15 minutes. It was always going to be about how many Liverpool would fancy scoring from there.

Salah’s hat-trick was nothing less than United deserved. If anything, Liverpool did them a favour by easing off in the last half-hour after substitute Paul Pogba was sent off for his high challenge which led to Keita being stretchered off.

When you have Liverpool fans spending the last 30 minutes of a game at Old Trafford singing songs in favour of the Manchester United manager, something is desperately wrong. The home side’s tactics were all like a bad joke, they went chasing after Liverpool and allowed acres of space at will. Ole will find it hard to explain exactly what he was thinking of.

Maybe it would have taken an 8-0 or 9-0 loss for United to pull the trigger, but to prolong this longer is surely not in the interests of Manchester United Football Club as things stand. Either Solskjaer needs to alter his approach or it is the occupant of his seat which needs to be changed.

And on the evidence of the last week, with a 4-2 loss to Leicester, a kamikaze comeback against Atalanta and an unchanged side with bewildering tactics resulting in a 5-0 home defeat to Liverpool, something is going to have to give very soon.

Paul Scholes wasn’t the only one who knew this was likely to happen.