Football
News
Smith Rowe is currently Arsenal's top goalscorer in the league and has been one of the most enjoyable young prospects to watch this term
Conor Keane
06:55, 06 Mar 2022

The Emirates Stadium has been a haven for young players in the Arsenal squad this season, with Mikel Arteta putting his faith in up and coming talent to help propel the Gunners back into the top four of the Premier League.

One of his prized pupils has been Emile Smith Rowe, who is currently his side’s top goalscorer in the league, has been one of the most enjoyable young prospects to watch this term. The 21-year-old has nine goals to his name and should he reach double figures, he will become only the second Arsenal player aged 21 or under to reach that feat, behind Nicolas Anelka in 1998-99.

It is quite impressive to see Smith Rowe following in the footsteps of one of the Premier League’s most recognised goalscorers considering he is not even a striker himself. He has the chance to reach the milestone this weekend against struggling Watford who have seen an improvement to their defence under Roy Hodgson, recording three clean sheets in the six league games since the veteran boss took charge.

Over the last few months, for various reasons, Smith Rowe has found his place in the starting lineup more sporadic as his manager has opted for the more experienced Martin Odegaard to have that key central attacking role. Since early December, when he started to become more of an impact substitute, Smith Rowe has scored three from the bench and once when he has started, highlighting how much of an impact he can have with a cameo as well as starting. His game time may have become more limited recently but it doesn’t put a dampener on what is proving to be a great season for the Croydon-born midfielder. 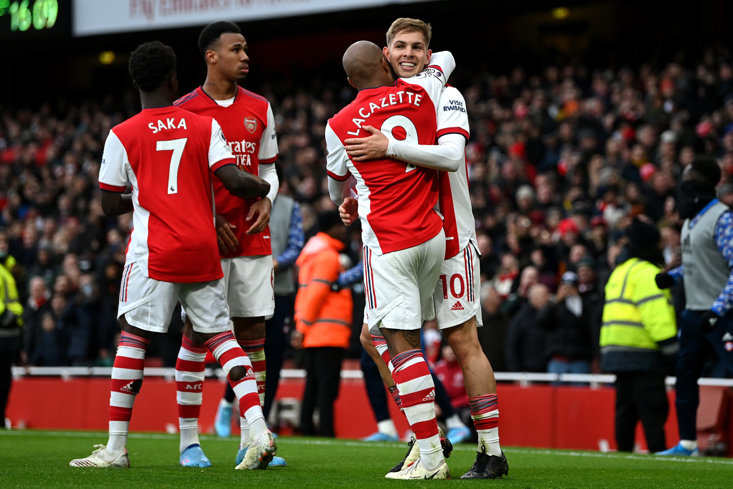 Smith Rowe’s excellent form is a more than justifiable reason for the youngster to become a member of the England squad. He has already been given his first call-up by Gareth Southgate, in November, but he was only given the nod as a result of several members of the Three Lions squad not being available to play. His call-up may have been fortunate four months ago, but it is worth noting that he was in splendid form and had built a case for his selection on merit alone as he was consistently performing for the Gunners.

The problem he faces to become a regular in the England squad is that he is not the only young talent having a brilliant season, not to mention the excellent core group Southgate already has at his disposal. There have been many young English talents making a case for a place in the England squad this season, including Conor Gallagher, Max Kilman, Tammy Abraham and Fikayo Tomori. But, like Smith Rowe, they will find a place in Southgate’s squad difficult to come by, especially in the immediate future.

Regardless of how well Smith Rowe continues to perform, if his role is mainly coming from the bench, then he has an uphill battle to get into Southgate’s favour ahead of the Qatar World Cup later in the year.

We are already aware of his abilities, but he needs to adapt his game so that he becomes a mainstay in the Arsenal lineup. It will only increase his exposure and make his progress impossible to ignore in the eyes of the Three Lions boss.