Football
News
The Canaries are ten points clear at the top of the Championship after beating Brentford 1-0
Simon Lillicrap
20:00, 03 Mar 2021

Norwich City have gone ten points clear at the top of the Championship and have one foot in the Premier League after a battling 1-0 win over promotion rivals Brentford. A solitary goal from star man Emiliano Buendia was the difference between the two sides although it was the Canaries, who are now almost certain to secure an instant return to the Premier League, who had the better of the chances across the 90 minutes.

Thomas Frank’s Brentford side needed to win this game in order to have any realistic chance of overhauling their hosts in the run-in, but now with a ten point deficit between the top two, they will instead be looking over their shoulder with Watford hot on their heels.

Once again, Buendia proved exactly why he is the hottest property in the second tier with an incredible solo goal. Receiving the ball from Mario Vrancic on the right hand side he drifted past a couple of Brentford defenders before firing the ball into the far corner with that fearsome left foot. Teemu Pukki, former Championship Golden Boot winner, looks to have rediscovered the yard of pace that made him so dangerous two years ago but couldn’t add to his 18 goals so far this season.

His best chance of the game came in the first half as he broke through the offside trap from the halfway line to face David Raya one on one, but the Finn couldn’t convert as the goalkeeper saved his effort. His other notable moment was a low shot from outside the area, which was well saved again by Raya, who was a busy man at Carrow Road. At the other end, although Ivan Toney, with 25 goals to his name already this term, led the Brentford line, he was unable to make a real impact on the game and limited to half chances, something that will have delighted Daniel Farke in the home dugout. 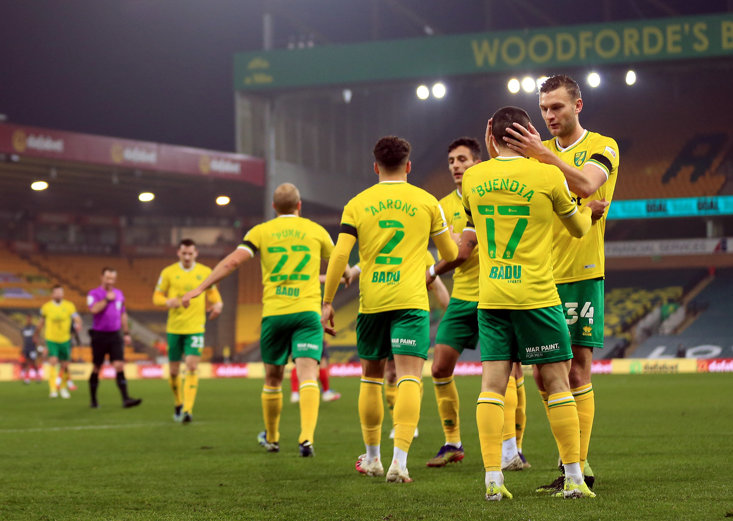 Ben Gibson wasted the best opportunity to double Norwich’s lead as he headed a great ball in straight at a grateful Raya. Aside from that, chances were limited as both teams seemed to understand what was at stake in this crucial game between the Championships top two, and Norwich saw the game out, despite late pressure from the away side. It isn’t the end of the road for Brentford, but these three points could well seal the deal for Norwich.

The perennial yoyo team, that has been relegated a record five times from the Premier League look to be heading back amongst England’s elite once again. Critics may scoff at their achievement, but the fact the club stuck with Farke, despite the embarrassing end to the last campaign deserves huge credit. The club are now once again reaping the rewards that stability brings and with players like Max Aarons, Buendia and Pukki still at the club - with the experience of a Premier League season under their belts - they should be better prepared for the top flight next season.

They may not have spent much money last time they were in the top flight, but what the Canaries instead spent their cash on was long-term contracts for the likes of Aarons, Todd Cantwell and Ben Godfrey. Some of those contracts earnt them big transfer fees, the others kept key players at the club despite interest from the Premier League. Those key contracts could well have secured Norwich the Championship title.