Chelsea have become just the second English team to reach a women’s Champions League final after beating Bayern Munich 4-1 (5-3 agg) in a thrilling end-to-end semi-final at Kingsmeadow on Sunday.

Following semi-final defeats against Wolfsburg in 2018 and Lyon in 2019, this is the first time Chelsea have progressed into the final and it also means that Emma Hayes’ side still have a chance at claiming an unprecedented quad of silverware this season.

The Blues had a lot of work to do, trailing the Germans 2-1 going into the second leg, but Chelsea were immense from the first whistle to the last. Fran Kirby opened the scoring for the Blues after combining with Sam Kerr after a quick breakaway, but were quickly pegged back when Bayern’s Sarah Zadrazil fired in an unstoppable effort from outside the box, rifling the ball past a helpless Ann-Katrin Berger in the Chelsea goal.

Chelsea levelled the tie on aggregate just before the break when South Korean midfielder Ji So-yun angled the ball into the bottom corner on the rebound from her own free-kick. Britain’s 14-year wait for a Champions League edged even closer when Jessica Carter delivered a wonderful near-post cross for Pernille Harder to duly nod in.

Chelsea were forced to dig deep with some deft defending as Bayern bombarded their goal, desperate to pull themselves back into the tie. Then, Chelsea broke clear on the counter and Kirby slotted into an empty net to make it 4-1, sparking delirium for the Blues and, in equal measure, utter heartbreak for Bayern. 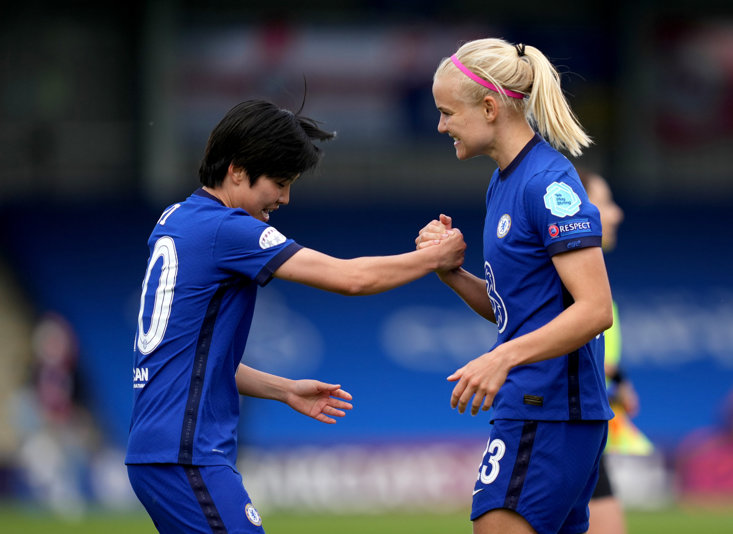 Speaking to BT Sport after the game, Chelsea manager Hayes said, “That last three minutes, watching the ball go into our box was the worst moment. I won't give you loads of platitudes. I have worked my whole life for today. In these situations they are so tense. This is thousands of hours of work. I am so proud of myself. I am so fortunate to be working for a club I adore.”

“I’m gonna say this to every coach sitting at home. This is thousands of hours, thousands of hours of travelling, thousands of setbacks. I’m so proud of myself that I got to this level through my hard work and determination, and I’m fortunate enough to be working for a football club that I adore, and to work with a set of players that were always in control. I’m glad they were because I never felt I was!”

Chelsea will now face Barcelona in the final, who beat PSG 3-2 on aggregate in the other semi-final, in Gothenburg on Sunday, 16 May.