England’s 5-0 World Cup qualifying victory over San Marino at Wembley ended with a Wolves player having the captain’s armband. An Everton striker and a Southampton midfielder got on the scoresheet while a West Ham man chipped in with an assist. It is encouraging to see manager Gareth Southgate use such a wide selection of players from across the Premier League ahead of this summer's Euros.

For Thursday night's clash against one of European football’s minnows, a host of players from both ends of the top-flight table combined for the Three Lions playing fluid, tidy football. Saints talisman James Ward-Prowse netted his first international goal on 14 minutes to set England on their way and from then on, it was job done, really. By full-time, they had managed 32 shots, converting five.

The hosts were far superior in every way and Toffees frontman Dominic Calvert-Lewin headed in the second midway through the first half, latching onto Reece James’ delicious right-wing cross. After Manchester City’s Raheem Sterling cut inside to curl in the third, Calvert-Lewin got his second and England’s fourth with an easy tap in after a beautiful ball from Ben Chilwell teed up Jesse Lingard, rejuvenated whilst on loan with the Hammers, on loan from Manchester United, to assist.

Southgate will need to utilise the entire Premier League when it comes to picking his squad for this summer’s tournament, there is just too much talent across the division. 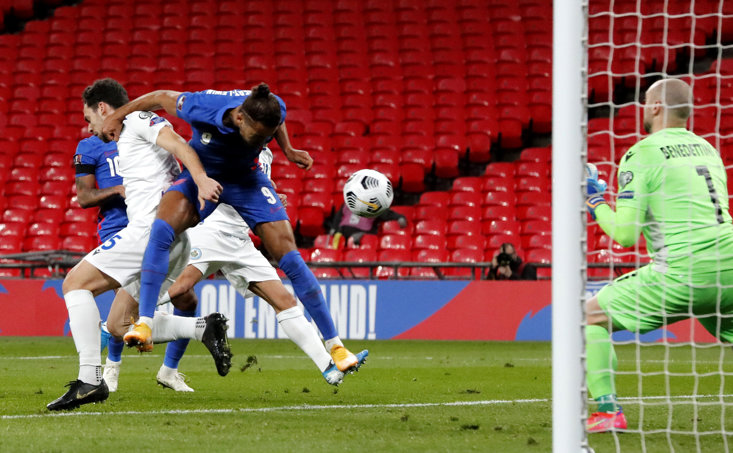 On Thursday, Nick Pope started in goal. The keeper plays for 15th placed Burnley but is considered one of the better stoppers in the league. Coady, patrols and leads Wolves excellently, and has excelled for England too, having been given his first call-up at the age of 27. While Leeds fans were disappointed to see Luke Ayling and Patrick Bamford miss out Kalvin Phillips marauds across the midfield at Elland Road and was in control for his country too alongside Ward-Prowse who proved key with his set-pieces so accurate and dangerous.

Then there is Ollie Watkins, who made his debut, after scoring 12 goals for Aston Villa so far since signing from Brentford in the summer. His delight was plastered all over his face when he whipped in England’s fifth late on. The smile was massive.

Jack Grealish and Declan Rice, too, may not play for the most successful clubs right now but they battle against them every week and boast the quality needed to shine on the international stage. Tyrone Mings, Sam Johnstone, Michael Keane, they can all make the step-up despite not playing for the Premier League’s Manchester clubs United and City, the London trio of Chelsea, Tottenham and Arsenal or Merseyside giants Liverpool.

It’s key that Southgate is willing to look further down the table and reward the players shining right now. There is a massive amount of talent to choose from now and the England boss is right to choose the players who provide the best balance as opposed to just calling up those with the biggest names.

For a long while, a perceived ‘big club’ bias shrouded England call-ups. A player could have been in the form of their lives but would miss out. Take Matt Le Tissier. The playmaker is one of the greatest and most entertaining players of the Premier League era. However, staying loyal to Southampton for 16 years, he managed just eight England caps despite being one of the best midfielders of his generation. One imagines had he played for Manchester United, he’d have been given more of a chance.

It was great and so encouraging to see such an eclectic mix of talent combine in the blue England shirt against San Marino and there seems to be a real togetherness in the camp. Some of these players have been afforded their first opportunity and worked tirelessly, full of pride, to ensure they impressed. 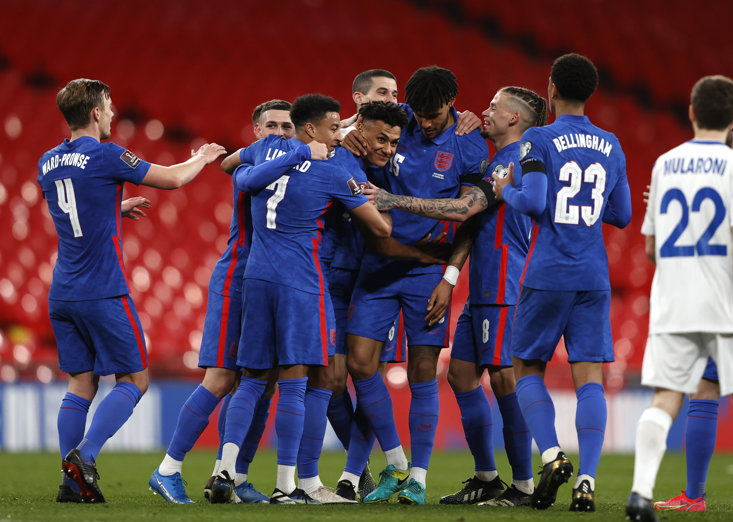 Ollie Watkins is mobbed after scoring on his England debut

England’s Golden Generation failed to fulfill their potential. In the first decade of the 21st century, the Three Lions squad was stacked full of players who played for the clubs fighting for titles and the Champions League. You would think such a team would thrive. Wrong.

Rio Ferdinand, speaking on BT Sport in 2017, alongside Steven Gerrard and Frank Lampard explained their domestic rivalry severely dented any possible chemistry whilst on international duty together.

"We came through at West Ham together, did everything together like proper mates,” Ferdinand said of Lampard. “I left and went to Leeds then Manchester United, Frank went to Chelsea and around that time our communication just disintegrated. It was down to, from my perspective, the obsession with winning. I didn't want to see Frank have an edge on me. I didn’t want to speak to him about anything he’d be able to take away to facilitate his team winning.

"It was the same with Stevie and England, when we were battling them (Liverpool) for the Premier League, I didn't want to sit around and have a beer with him because I didn't want to hear what Liverpool were doing... I think that's what held us back."

Southgate’s team has been compiled from all corners of the Premier League. The players go toe-to-toe every week but come this summer, they will be together as one, as England.

If Thursday’s stroll in the park proved anything, it’s that Gareth Southgate must forget the top six and ignore the table when it comes to picking his Euro 2020 squad.