Cricket
News
Thanks to the new-found depth being displayed we can dare to dream that back-to-back triumphs for England might yet be on the cards
Kris Voakes
15:15, 14 Jul 2021

“By the barest of all margins.”

The inimitable Ian Smith couldn’t have summed it up better when, on 14 July 2019, England won the Cricket World Cup after the most tightly-contested final – and maybe the most-tightly contested match – of all time. Even two years on, it is impossible to think of the events of that day against New Zealand without getting goosebumps.

Everything happened. Everything. There was Trent Boult catching Ben Stokes only to step on the boundary rope for six. Stokes then went on that final-over onslaught which saw him hit one six then inadvertently deflect Martin Guptill’s throw off his bat and beyond the boundary for another six off the next ball.

And that was just the start… Adil Rashid was run out, Mark Wood was run out, the super over, Jofra Archer’s no-ball, Jimmy Neesham’s six, and that final-ball run out of Guptill which handed England victory on boundary count-back. Go back and watch it again… it never gets old. 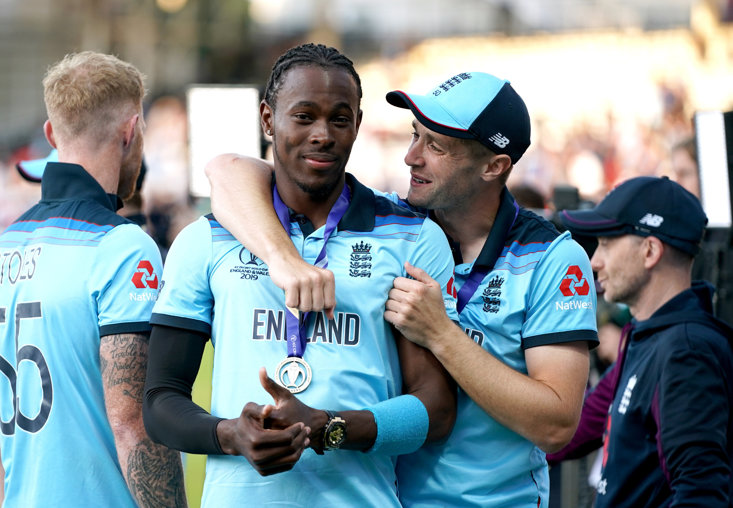 After the England football team lost on penalties in the Euro 2020 final on Sunday, many of the country’s sports fans will consider it timely to be reminded of the success of Eoin Morgan’s team two years ago, but the second anniversary of that dramatic day comes at a time when the nation’s cricketers are busy building for a title defence.

Tuesday’s three-wicket win over Pakistan at Edgbaston was a notable milestone for a number of reasons. James Vince’s 95-ball 102 was the driving force behind a fantastic run chase which completed a series whitewash by a team none of whom were meant to even be playing in any of the three matches.

The Covid-19 outbreak which forced the entire original squad into self-isolation inadvertently gave England the opportunity to see just how deep their one-day stocks go. The likes of Vince, Lewis Gregory, Brydon Carse and Phil Salt would have been watching on from home if all had gone to plan, but instead they played key roles in a convincing series victory which gave England a maximum 30 points in their bid to confirm a speedy qualification for the 2023 Cricket World Cup in India.

We’re a little over two years away from the next event starting, and Morgan and his side look well placed to cause problems at the tournament again. While they are not the current world number-one-ranked team – that honour falls to Kane Williamson’s New Zealand side – the newly-displayed depth shows that they will have plenty to offer in India even if some of their bigger names don’t make it. 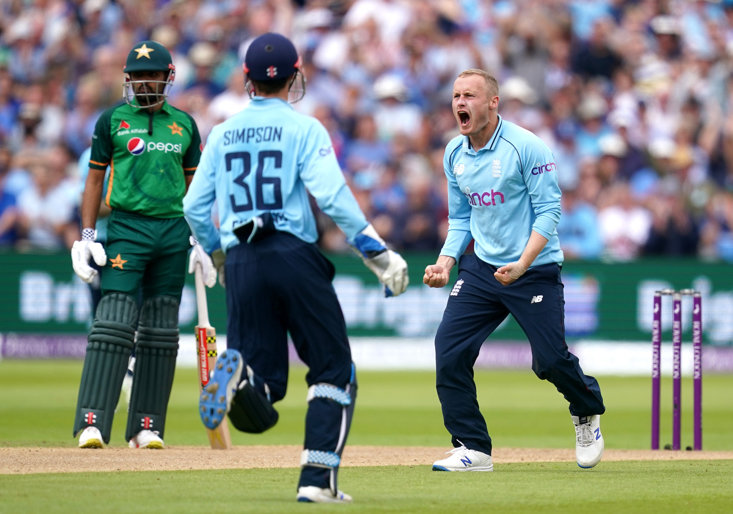 “Throughout the series the efforts have been fantastic,” stand-in skipper Stokes said after Tuesday’s win. “The normal personnel aren't here, but credit to Eoin, and Chris Silverwood, and Trevor Bayliss for the way they've lead the team over the last six years. The most pleasing thing is that no one is affected by the situation and had a great time in front of the Edgbaston crowd. Everyone called up has seriously put their hand up.”

With the T20 World Cup and then the Ashes coming up in late-2021, the five-day and 20-over formats take over for the time being. England are now only due to face Bangladesh and Netherlands in 50-over cricket in the next 11 months before India tour the UK next summer, albeit the international calendar has become increasingly fluid since Covid-19, meaning that the ODI scene takes a step back from the spotlight.

But the countless reruns we will no doubt keep watching of the 2019 Cricket World Cup final will keep us occupied for the time being, and thanks to the new-found depth being displayed we can also dare to dream that back-to-back triumphs might yet be on the cards.

x
Suggested Searches:
Manchester United
Liverpool
Manchester City
Marcus Rashford
Premier League
More
cricket
Moeen Ali Retires From Test Cricket Having Broken Down Barriers...
After 64 matches, five centuries and 195 wickets, Moeen Ali has called time on his England Test career [ ... ]
cricket
England's All Too Predictable Batting Collapse Costs Them Test...
Another inevitable England batting collapse. On a strangely sunny Monday morning in early September, [ ... ]
cricket
Consistency Now Key As England Look To Repeat Headingley Heroics
“Just when I thought I was out, they pull me back in…” There was a moment there where [ ... ]
cricket
England's New Look Line-Up Already On The Back Foot As India...
In the week that saw Lord Ian Botham appointed trade envoy to Australia, England’s current crop [ ... ]
cricket
Without Everyone Playing Their Part, England's Cricketing Struggles...
Former England Test cricket bowler Ryan Sidebottom believes England can enjoy success again if the whole [ ... ]
cricket
England's Batting Line-Up Is Shoddy, But The Lack Of Depth Is...
An Englishman with a bat in front of three sticks of wood has now become as nervy of a spectacle as [ ... ]
cricket
England's Final Day Defeat To India Was Inevitable, And Root...
A disaster. A shambles. An embarrassment. Several words have been used to describe England’s fifth [ ... ]
cricket
Rain And Root Deny India, But England Can't Keep Relying On...
In the end, the rain finished off the job Joe Root had started. The First Test between England and India [ ... ]
cricket
The Greatest Test Match: England's 2005 Edgbaston Ashes Win...
It felt like the peak of Test cricket at the time. Arguably, it remains the greatest ever game in the [ ... ]
cricket
Time For Joe Root's England To Find Some Consistency - Sidebottom
Former England Test bowler Ryan Sidebottom insists that Joe Root’s side must turn in a stirring [ ... ]
cricket
Ben Stokes' Break From Cricket Highlights The Strides Made On...
It is a truly wonderful thing that Ben Stokes will not be in England’s Test squad to face India [ ... ]
cricket
Ryan Sidebottom: England's T20 Hopes Have Received A Huge Boost...
We’ve seen the likes of Jonny Bairstow, Ben Duckett and James Vince flashing the bat to great [ ... ]
cricket
Ryan Sidebottom: The Hundred Is ''Off To A Great Start'' After...
Ryan Sidebottom believes cricket's divisive new tournament 'The Hundred' proved [ ... ]
cricket
Ryan Sidebottom: Why The Hundred Is A Game Changer For Women's...
For women in particular, The Hundred is huge. Ahead of the first ball being bowled it has had its doubters [ ... ]
cricket
The Newcomers Looking To Help Fire England To An ODI Win Against...
An inexperienced England are facing a huge test as they have been forced to name a brand new 18-man [ ... ]
cricket
Perennial Finalists New Zealand Finally Come Good To Win World...
New Zealand finally got the job done. In 2015 they were the entertainers of the tournament at the Cricket [ ... ]
cricket
Sophia Dunkley Is England's Newest Cricketing Icon That Can...
Sophia Dunkley is a history maker. She became the first black woman to play Test cricket for England’s [ ... ]
cricket
ECB Right To Suspend Ollie Robinson As Cricket Looks To Learn...
Culture Secretary Oliver Dowden joined a number of outspoken critics of the ECB’s suspension of [ ... ]
cricket
New Zealand Bring Desire, England Are Just Dire As First Test...
When New Zealand could have batted for a draw, they went hell for leather on the final day at Lord’s. [ ... ]
cricket
''I Can Still Improve'' Jimmy Anderson Part Of Resurgent Older...
Whisky. Fine wine. Jimmy Anderson. Just three things that get better with age. England’s highest [ ... ]
cricket
World's Best Cricketer Ben Stokes Has Become England's Imperfect...
If there is one thing the British public love more than an underdog story, it is a tale of redemption. [ ... ]
cricket
England Just Fall Short Against India Despite Sam Curran Heroics...
England came up short against India, losing by just seven runs in an absolutely thrilling ODI decider [ ... ]
cricket
England’s Aggressive Batting Pays Off As Bairstow And Stokes...
When England’s top three bat like this, there is simply no side in the world that can stop them. [ ... ]
cricket
Three Years On, Steve Smith Deserves Big Praise For His Response...
On this day three years ago the entire sporting world collapsed on Steve Smith’s shoulders. In [ ... ]
cricket
Root's Calm Head Missed As England Collapse To 66-Run ODI Loss...
India have defeated England by 66 runs in the first one-day international in a game that will once again [ ... ]
cricket
India T20 Win Over England Could Be Perfect Precursor To 2021...
England have lost the T20 series in India 3-2 having been comprehensively beaten in the final match. [ ... ]
cricket
Blistering Buttler Leads England To Bounce-Back T20 Win Over...
England showed their resilient side on Tuesday as they bounced back from Sunday’s defeat in the [ ... ]
cricket
Kohli Takes Centre Stage As England Come Up Short Against India...
England came up short in the second T20I match v India, losing by seven wickets as Virat Kohli proved [ ... ]
cricket
Archer And Roy Star As England Sweep India Aside In Opening...
England began Twenty20 World Cup year in emphatic fashion as they hammered India by eight wickets in [ ... ]
cricket
Weather No Excuse, England Must Learn From Woeful Batting Performance...
How quickly things can change. England’s 227 run win in the First Test v India feels like a lifetime [ ... ]