England’s hopes of lifting the European Championship trophy for the first time were stolen away by Italy on Sunday, as Gianluigi Donnarumma’s save from Bukayo Saka’s penalty gave the Azzurri a 3-2 shootout win after a 1-1 draw in the Euro 2020 final and left the Three Lions still looking to end their 55 years of hurt.

Roberto Mancini’s men got up off the canvas after Luke Shaw’s dramatic opening goal inside he first two minutes, with Leonardo Bonucci equalising midway through the second half. It was then left to Donnarumma to finish off England as Marcus Rashford, Jadon Sancho and Saka all failed from 12 yards.

It will be a difficult pill for England supporters to swallow, but once Italy got into their stride late in the first half the Azzurri were much the better of the two teams for long periods.

Few could have believed that Gareth Southgate’s side would get such a dream start, and even fewer would have predicted the identity of the goalscorer. Not only was it a low-scoring full-back who grabbed the goal, but it was Shaw, a man who has been to hell and back in a footballing sense since he first broke into the England side as a teenager.

Kieran Trippier made the most of Kyle Walker’s long-busting run by using the extra time it created to deliver a perfect cross-field ball for Shaw to half-volley home beautifully at the near post.

The goal lifted the proverbial roof off the stadium, but by the end of the first half Italy had started to find a foothold, and Federico Chiesa was close to levelling the scores when he cut in off the right and unleashed a left-foot shot which had Jordan Pickford flat-footed but just fizzed wide of the near post. 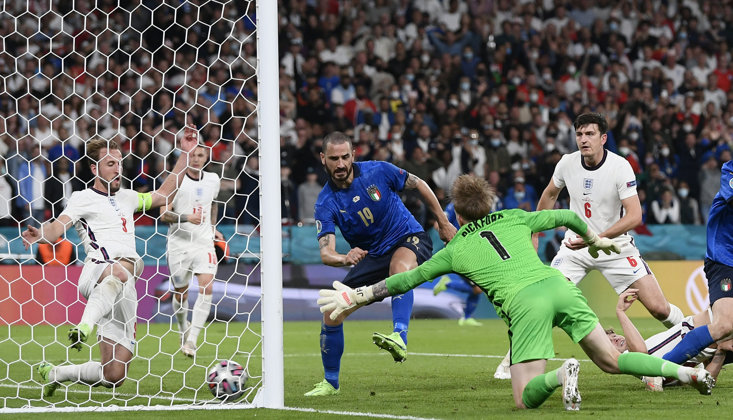 Early in the second half there was further Italy pressure, with Lorenzo Insigne squirming his way to the byeline and forcing Pickford to bat the ball away with both hands. Chiesa then worked a bit of space and got away a curling shot through a crowd of defenders only for Pickford to get down smartly to save.

At the other end John Stones couldn’t quite get a clean connection onto his header from a left-wing corner and Gianluigi Donnarumma was able to tip over the bar, and moments later the Azzurri were level.

From a right-wing corner, Stones denied Giorgio Chiellini a clear run at the ball and Pickford got down brilliantly to turn Marco Verratti’s header onto the foot of the post. But Leonardo Bonucci was the quickest to react, slotting home from close range with the covering Harry Kane unable to stop the ball finding the bottom corner of the net.

As the game entered extra-time, legs became tired and defences became tighter as neither team wanted to make the crucial error, leaving penalties the obvious conclusion.

And after so many spot-kick heartaches, England suffered another on the biggest of stages as three of England substitutes came up short from 12 yards. The long, long wait goes on.