England's women’s rugby league coach Craig Richards said his side showed themselves to be  “A really talented team” after they began their World Cup preparations with a 60-0 rout over Wales at the Halliwell Jones Stadium on Friday night.

It was England's first outing since their 2019 tour of Papua New Guinea, whilst it was a full international test match debut for the Welsh side, who had only played two previous fixtures against England Lions and Great Britain Teachers.

Richards named a side littered with stars from the Betfred Women’s Super League, the majority of whom had been allowed to train throughout lockdown as part of England’s Elite Player Unit, which classes as elite sport. The gulf in experience and fitness was evident as England controlled the game throughout, both with and without the ball.

Carrie Roberts opened the scoring in just the second minute and was followed in by Tara Jones, Jodie Cunningham, Shona Hoyle, Fran Goldthorpe and Chantelle Crowl as England posted a 34-0 lead at the break. 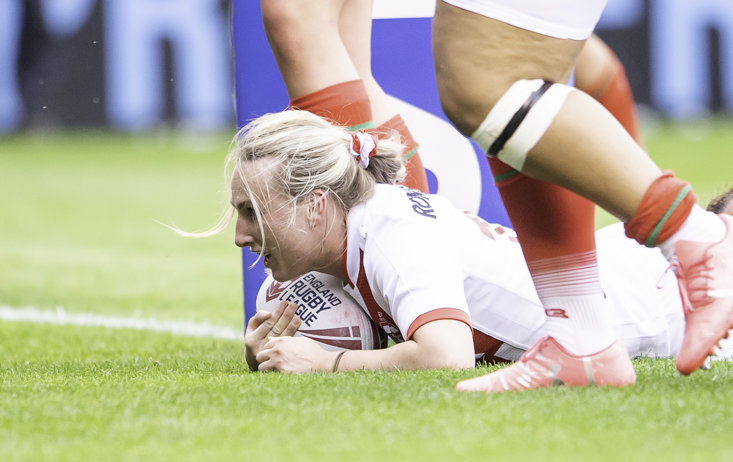 JODIE CUNNINGHAM CRASHES OVER FOR ONE OF ENGLAND'S 11 TRIES

Despite the two-year break in fixtures, the England squad had been able to get together for a number of training camps throughout the pandemic, and the benefit of these was in full effect as they perfectly executed their attacking structure at times.

Much of their fluidity with ball in hand came from the hugely impressive half-back pairing of Georgia Roche and Beth Stott, whilst there were also eye-catching performances from the likes of full-back Tara Stanley, and St Helens forward Amy Hardcastle.

Despite the heavy scoreline, Wales head coach Tom Brindle will take encouragement from his side's first foray onto the international scene. The Dragons played the vast majority of the game without the ball but looked committed in defence, especially in the second half.

England crossed a further five times after the break to bring up the 60, and Richards said that overall he was pleased with what he saw.

“I think tonight revealed that we’ve not played together for two years," he told Sky Sports. "But it also revealed that we’re a really talented team with some talented individuals who are willing to work hard and have pride in the shirt, we just need more time together and more game time, but I was really happy to be fair.”

Attention now turns to the World Cup for Richards and his side, which kicks off on November 9 when England take on Brazil at Emerald Headingley.