England end a historic 2019 by taking on South Africa in the First Test in Centurion this week. But far from it being a chance to reflect on the summer’s World Cup win, the beginning of a tough series comes at a time when Joe Root’s side need to find a new direction, and quickly.

Whereas the 1-0 series defeat in New Zealand recently was not part of the World Test Championship, the trip to South Africa is. That brings a greater sense of urgency to the rebuild England are attempting to undertake in the four-game series.

Not only do Root and new coach Chris Silverwood have a multitude of questions to answer still regarding the construction of their line-up, but the readiness of Stuart Broad, Jofra Archer, Chris Woakes, Ollie Pope and Jack Leach after illness remains unclear. Ben Stokes’ participation in Centurion was also thrown into doubt on Tuesday when he rushed to be at the bedside of his father Ged, who was taken seriously ill after arriving in South Africa ahead of the series.

The late selection headaches could alter Silverwood’s plans to once again go with an all-seam attack despite England’s failure to take 20 wickets with a similar line-up against New Zealand in Hamilton last time out. That marked the first occasion since the Headingley Test in 2012 - famous for the Kevin Pietersen Textgate episode - that England had overlooked spin, and it would be a bold move for them to attempt it again.

"Obviously in Hamilton we looked at all the stats, who took wickets at the ground, and it showed that spin didn't really play much part in the games, or certainly have much effect on the games,” Silverwood said earlier this week.

"We look at the stats for this ground, it's the same thing, you're looking at wickets taken by seam, wickets taken by spin and the averages that go along with them, it suggests that seam is the way forward, and the thing that has most effect on the game here, so we're certainly looking at that."

With England at a crossroads, it won’t only be Silverwood whose actions will be under an intense spotlight over the next six weeks. While Root’s 226 in Hamilton eased the pressure a little on the captain, and Rory Burns’ century seemed to cement his place at the top of the order for the foreseeable future, England need to show that they can build a patient innings in bowler-friendly conditions against top-quality opposition.

England Cricket
@englandcricket
Who will be our leading run scorer against South Africa? 🏴󠁧󠁢󠁥󠁮󠁧󠁿🏏
#SAvENG 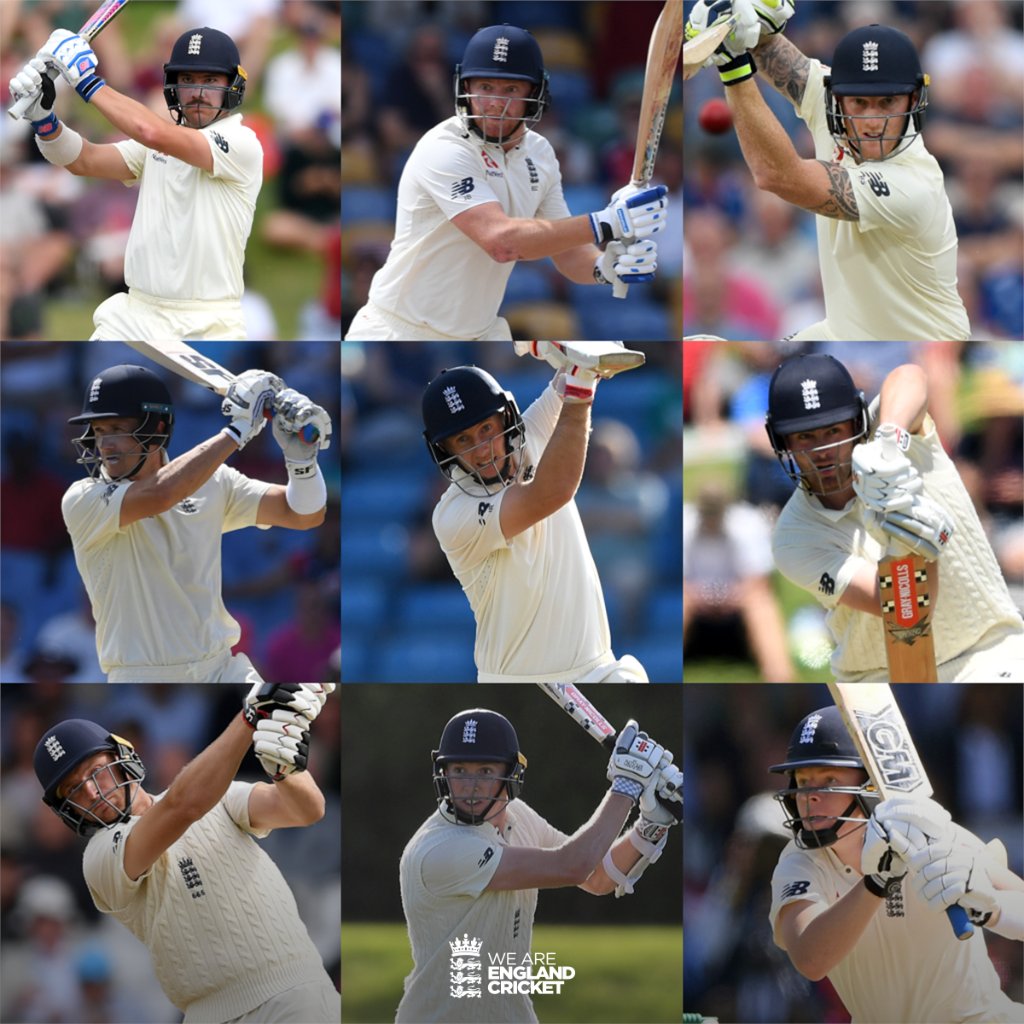 The likes of Dom Sibley, Joe Denly and Pope all still need to convince the vast majority of onlookers that they have the mentality to bat for long periods in the Test arena and Jonny Bairstow has some rebuilding of his reputation to do. Meanwhile, there is no certainty as to how England’s bowling attack will shape up with all three of Broad, Archer and the returning Jimmy Anderson fit and available.

And while this is not the South Africa of 10 years ago - there is no Hashim Amla, Graeme Smith, Dale Steyn, Morne Morkel or AB de Villiers for the Proteas to call upon these days - England cannot afford to take their opposition for granted as captain Faf du Plessis looks to lead a new generation of South African stars to the top of the world.

The last time England travelled to this part of the world, Stokes’ sensational 258 in Cape Town was the highlight of a 2-1 series win. But if the World Cup winners are to start making inroads at the top of the World Test Championship then they will need to start finding answers right through their side rather than continuing to rely on moments of individual brilliance.

x
Suggested Searches:
Manchester United
Liverpool
Manchester City
Marcus Rashford
Premier League
More
cricket
Ryan Sidebottom: The Hundred Is ''Off To A Great Start'' After...
Ryan Sidebottom believes cricket's divisive new tournament 'The Hundred' proved [ ... ]
cricket
Ryan Sidebottom: Why The Hundred Is A Game Changer For Women's...
For women in particular, The Hundred is huge. Ahead of the first ball being bowled it has had its doubters [ ... ]
cricket
England Can Dream Of Another World Cup Win, Two Years On From...
“By the barest of all margins.” The inimitable Ian Smith couldn’t have summed it up [ ... ]
cricket
The Newcomers Looking To Help Fire England To An ODI Win Against...
An inexperienced England are facing a huge test as they have been forced to name a brand new 18-man [ ... ]
cricket
Perennial Finalists New Zealand Finally Come Good To Win World...
New Zealand finally got the job done. In 2015 they were the entertainers of the tournament at the Cricket [ ... ]
cricket
Sophia Dunkley Is England's Newest Cricketing Icon That Can...
Sophia Dunkley is a history maker. She became the first black woman to play Test cricket for England’s [ ... ]
cricket
ECB Right To Suspend Ollie Robinson As Cricket Looks To Learn...
Culture Secretary Oliver Dowden joined a number of outspoken critics of the ECB’s suspension of [ ... ]
cricket
New Zealand Bring Desire, England Are Just Dire As First Test...
When New Zealand could have batted for a draw, they went hell for leather on the final day at Lord’s. [ ... ]
cricket
''I Can Still Improve'' Jimmy Anderson Part Of Resurgent Older...
Whisky. Fine wine. Jimmy Anderson. Just three things that get better with age. England’s highest [ ... ]
cricket
World's Best Cricketer Ben Stokes Has Become England's Imperfect...
If there is one thing the British public love more than an underdog story, it is a tale of redemption. [ ... ]
cricket
England Just Fall Short Against India Despite Sam Curran Heroics...
England came up short against India, losing by just seven runs in an absolutely thrilling ODI decider [ ... ]
cricket
England’s Aggressive Batting Pays Off As Bairstow And Stokes...
When England’s top three bat like this, there is simply no side in the world that can stop them. [ ... ]
cricket
Three Years On, Steve Smith Deserves Big Praise For His Response...
On this day three years ago the entire sporting world collapsed on Steve Smith’s shoulders. In [ ... ]
cricket
Root's Calm Head Missed As England Collapse To 66-Run ODI Loss...
India have defeated England by 66 runs in the first one-day international in a game that will once again [ ... ]
cricket
India T20 Win Over England Could Be Perfect Precursor To 2021...
England have lost the T20 series in India 3-2 having been comprehensively beaten in the final match. [ ... ]
cricket
Blistering Buttler Leads England To Bounce-Back T20 Win Over...
England showed their resilient side on Tuesday as they bounced back from Sunday’s defeat in the [ ... ]
cricket
Kohli Takes Centre Stage As England Come Up Short Against India...
England came up short in the second T20I match v India, losing by seven wickets as Virat Kohli proved [ ... ]
cricket
Archer And Roy Star As England Sweep India Aside In Opening...
England began Twenty20 World Cup year in emphatic fashion as they hammered India by eight wickets in [ ... ]
cricket
Weather No Excuse, England Must Learn From Woeful Batting Performance...
How quickly things can change. England’s 227 run win in the First Test v India feels like a lifetime [ ... ]
cricket
Why A Massive Fourth Test Against India Could Define England's...
England’s whole year might well ride on the outcome of Thursday’s Fourth Test against India. [ ... ]
cricket
Brittle England Beaten Inside Two Days As India Survive The...
It was one of the most chaotic days of Test cricket ever but by shortly after tea on day two in Ahmedabad [ ... ]
cricket
Sidebottom Wants To See Both Broad And Anderson Play Third Test...
Former England bowler Ryan Sidebottom says England ought to select both Stuart Broad and Jimmy Anderson [ ... ]
cricket
The Hundred Can Help Revolutionise Women’s Cricket And Inspire...
The long-awaited The Hundred competition is set to revolutionise cricket and will finally kick off this [ ... ]
cricket
Should Test Cricket Lose The Toss After India's Battering Of...
England have nobody to blame but themselves for the manner of their 317-run mauling at the hands of [ ... ]
cricket
Sidebottom Hails ''Fantastic'' Root And ''Stunning'' Anderson...
Ryan Sidebottom has heaped praise on both Jimmy Anderson and captain Joe Root following England’s [ ... ]
cricket
Fantastic Jimmy Anderson Wraps Up A Statement England Win In...
England wrapped up a dominant First Test win over India on Tuesday, with Jimmy Anderson collecting three [ ... ]
cricket
100 Up! Joe Root's Timely Form Could Be The Difference For England...
He is the baby-faced batsman who slotted into England’s line-up in India in 2012-13 and immediately [ ... ]
cricket
Tailenders Is The Easy-Listening Pod That Takes An Alternative...
At the moment, we’re all enamoured with cricket, thanks to India digging in and out-saucing the [ ... ]
cricket
The New Book Shining A Light On The Biggest Scandal In Cricket...
It has been nine years since the News of the World ceased publication. Nine years. Doesn’t time [ ... ]
cricket
How Botham And England Revived The Spirits Of A Nation At The...
In the summer of 1981 a combination of spiralling unemployment and racial tension had led to riots in [ ... ]