England came up short against India, losing by just seven runs in an absolutely thrilling ODI decider which went right down to the wire. It looked like the tie was all over after England’s top order fell cheaply, that was until Sam Curran came to the crease and hit a huge 95, but it wasn’t quite enough as India saw out the final over to win the triple header - having already won the Test and T20 series.

For the third time in a row, England won the toss, India batted first and the visitors attempted to chase a decent total. On the best wicket we have seen so far in the one day games, India’s opening pairing of Rohit Sharma and Shikhar Dhawan once again made it to 100 for no loss, before England’s spinners got stuck in.

Adil Rashid showed his great flexibility as he cleanly bowled Rohit with a googly to stop India in their tracks before then brilliantly drawing a chipped shot from Dhawan which he caught himself. Despite being hit for 81 runs over his ten overs, Rashid proved his value by crucially dismissing both openers, when England were struggling to make inroads.

Having watched Rashid take the glory, fellow spinner Moeen got in on the act to dismiss Virat Kohli with an absolutely plum delivery. England’s bowlers had taken three wickets in just 19 balls and completely changed the outlook of this crucial match. Rishabh Pant, who has been so impressive recently, top-scored for India with 78 as he and Hardik Pandya put together a partnership that took India up to 256-5.

With Jofra Archer needing an operation after injuring his hand at home, there will be opportunities for ‘fringe’ bowlers to make an impact. Sam Curran got Pant caught behind and Stokes bowled H.Pandya but it was late on where the England bowlers really started to enjoy themselves. Finishing with a flourish, Mark Wood showed his effectiveness with three wickets as India tried to push on with five overs remaining on 321-6, yet they only finished on 329 all out.

England’s top three, who dragged the side to victory in the last meeting, failed to repeat the feat as both openers were dismissed within three overs. Jason Roy aggressively hit 14 off the first five deliveries but then was beautifully bowled by Bhuvneshwar Kumar, while Jonny Bairstow fell to the same bowler moments later, LBW. 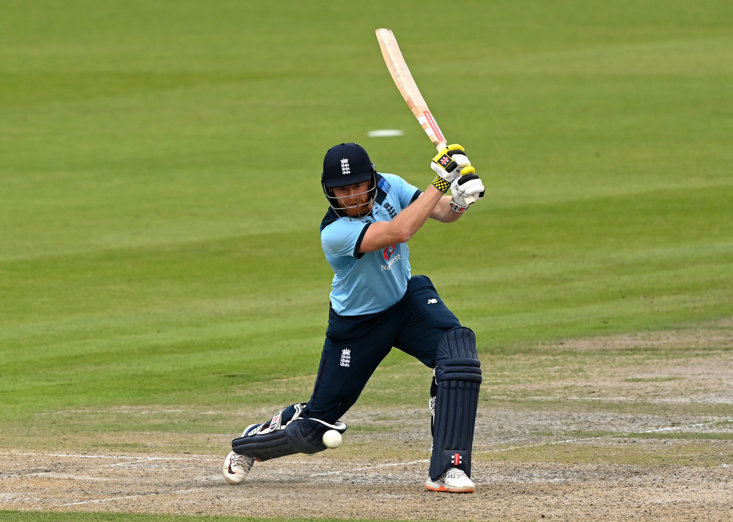 It looked like India had missed a golden opportunity as Ben Stokes was dropped by Hardik Pandya, with England on 37-2 but Stokes would only go on to make 35 as England struggled to gain any momentum. This wouldn’t be the last missed catch for Kohli’s side, who could have won this game comfortably. It was a big game for Jos Buttler with the bat but he failed to impress, out for 15 after a review from captain Kohli overturned the umpire’s original not out decision.

Liam Livingstone and Dawid Malan came in to steady the ship without ripping up trees, putting together a partnership of 60 before Livingstone was caught and bowled by that man again, Shardul Thakur, who has caused England problems all series. Malan made 50 from 50 before pulling to Rohit to catch from another difficult Thakur delivery. For all the promise both he and Livingstone showed, Thakur provided a spark England just couldn’t deal with.

Moeen came in to bat and hit a couple of sixes before falling, while Curran did the same before being dropped by Hardik Pandya on 23. It wasn’t his day in the field. England needed 116 from 102, then 79 from 78 after great work from Curran and Rashid. Kohli pulled off a brilliant diving one-handed catch to dismiss Rashid for 19, Thakur again with the wicket, but Curran was absolutely superb, keeping the game alive on his way to 95 not out.

There were more butterfingers from India as Wood was dropped by Takur, before Curran was dropped the very next ball by Natarajan. England needed 14 from the final over but Wood was run out first ball and Curran had too much to do from the final four deliveries.

A thrilling tour of India comes to an end and the results may not have gone England’s way, but there were some spectacular individual performances to admire from this exciting side. Let's see what the rest of 2021 has in store for them.

x
Suggested Searches:
Manchester United
Liverpool
Manchester City
Marcus Rashford
Premier League
More
cricket
Ryan Sidebottom: The Hundred Is ''Off To A Great Start'' After...
Ryan Sidebottom believes cricket's divisive new tournament 'The Hundred' proved [ ... ]
cricket
Ryan Sidebottom: Why The Hundred Is A Game Changer For Women's...
For women in particular, The Hundred is huge. Ahead of the first ball being bowled it has had its doubters [ ... ]
cricket
England Can Dream Of Another World Cup Win, Two Years On From...
“By the barest of all margins.” The inimitable Ian Smith couldn’t have summed it up [ ... ]
cricket
The Newcomers Looking To Help Fire England To An ODI Win Against...
An inexperienced England are facing a huge test as they have been forced to name a brand new 18-man [ ... ]
cricket
Perennial Finalists New Zealand Finally Come Good To Win World...
New Zealand finally got the job done. In 2015 they were the entertainers of the tournament at the Cricket [ ... ]
cricket
Sophia Dunkley Is England's Newest Cricketing Icon That Can...
Sophia Dunkley is a history maker. She became the first black woman to play Test cricket for England’s [ ... ]
cricket
ECB Right To Suspend Ollie Robinson As Cricket Looks To Learn...
Culture Secretary Oliver Dowden joined a number of outspoken critics of the ECB’s suspension of [ ... ]
cricket
New Zealand Bring Desire, England Are Just Dire As First Test...
When New Zealand could have batted for a draw, they went hell for leather on the final day at Lord’s. [ ... ]
cricket
''I Can Still Improve'' Jimmy Anderson Part Of Resurgent Older...
Whisky. Fine wine. Jimmy Anderson. Just three things that get better with age. England’s highest [ ... ]
cricket
World's Best Cricketer Ben Stokes Has Become England's Imperfect...
If there is one thing the British public love more than an underdog story, it is a tale of redemption. [ ... ]
cricket
England’s Aggressive Batting Pays Off As Bairstow And Stokes...
When England’s top three bat like this, there is simply no side in the world that can stop them. [ ... ]
cricket
Three Years On, Steve Smith Deserves Big Praise For His Response...
On this day three years ago the entire sporting world collapsed on Steve Smith’s shoulders. In [ ... ]
cricket
Root's Calm Head Missed As England Collapse To 66-Run ODI Loss...
India have defeated England by 66 runs in the first one-day international in a game that will once again [ ... ]
cricket
India T20 Win Over England Could Be Perfect Precursor To 2021...
England have lost the T20 series in India 3-2 having been comprehensively beaten in the final match. [ ... ]
cricket
Blistering Buttler Leads England To Bounce-Back T20 Win Over...
England showed their resilient side on Tuesday as they bounced back from Sunday’s defeat in the [ ... ]
cricket
Kohli Takes Centre Stage As England Come Up Short Against India...
England came up short in the second T20I match v India, losing by seven wickets as Virat Kohli proved [ ... ]
cricket
Archer And Roy Star As England Sweep India Aside In Opening...
England began Twenty20 World Cup year in emphatic fashion as they hammered India by eight wickets in [ ... ]
cricket
Weather No Excuse, England Must Learn From Woeful Batting Performance...
How quickly things can change. England’s 227 run win in the First Test v India feels like a lifetime [ ... ]
cricket
Why A Massive Fourth Test Against India Could Define England's...
England’s whole year might well ride on the outcome of Thursday’s Fourth Test against India. [ ... ]
cricket
Brittle England Beaten Inside Two Days As India Survive The...
It was one of the most chaotic days of Test cricket ever but by shortly after tea on day two in Ahmedabad [ ... ]
cricket
Sidebottom Wants To See Both Broad And Anderson Play Third Test...
Former England bowler Ryan Sidebottom says England ought to select both Stuart Broad and Jimmy Anderson [ ... ]
cricket
The Hundred Can Help Revolutionise Women’s Cricket And Inspire...
The long-awaited The Hundred competition is set to revolutionise cricket and will finally kick off this [ ... ]
cricket
Should Test Cricket Lose The Toss After India's Battering Of...
England have nobody to blame but themselves for the manner of their 317-run mauling at the hands of [ ... ]
cricket
Sidebottom Hails ''Fantastic'' Root And ''Stunning'' Anderson...
Ryan Sidebottom has heaped praise on both Jimmy Anderson and captain Joe Root following England’s [ ... ]
cricket
Fantastic Jimmy Anderson Wraps Up A Statement England Win In...
England wrapped up a dominant First Test win over India on Tuesday, with Jimmy Anderson collecting three [ ... ]
cricket
100 Up! Joe Root's Timely Form Could Be The Difference For England...
He is the baby-faced batsman who slotted into England’s line-up in India in 2012-13 and immediately [ ... ]
cricket
Tailenders Is The Easy-Listening Pod That Takes An Alternative...
At the moment, we’re all enamoured with cricket, thanks to India digging in and out-saucing the [ ... ]
cricket
The New Book Shining A Light On The Biggest Scandal In Cricket...
It has been nine years since the News of the World ceased publication. Nine years. Doesn’t time [ ... ]
cricket
How Botham And England Revived The Spirits Of A Nation At The...
In the summer of 1981 a combination of spiralling unemployment and racial tension had led to riots in [ ... ]
cricket
Ben Stokes Inspires England Victory In Five-Day Test Classic
This was five-day test match cricket at its finest. Ben Stokes took the final three wickets on Tuesday [ ... ]