When England’s top three bat like this, there is simply no side in the world that can stop them. Jason Roy, Jonny Bairstow and Ben Stokes, chasing 336, put on a masterful display of batting as they slogged India all over the show to take the second ODI by six wickets. In an aggressive, attacking display with the bat, England almost completely silenced any doubters that had emerged after Tuesday’s loss. Almost.

Three wickets in nine balls late on for India got the England nerves jangling but Liam Livingstone came in on his debut to see the visitors comfortably over the line and level the ODI series at 1-1 heading into the decider on Sunday.

Without Eoin Morgan, England needed a win to keep their series hopes alive, and put India in to bat after winning the toss as they looked to fix the mistakes made in the first match. India batted with great balance, not going out all guns blazing, but instead taking their time to reach a weak looking 210-3 off 40 overs, before going hell for leather to add 126 to their total off the final ten overs. They finished on 336 after that incredible finish but England’s bowling was good in spells.

In particular, Reece Topley will be pleased with his display as he took the first wicket of Shikhar Dhawan and finished with two wickets for 50 runs, off eight overs. Having reduced the hosts to just 37-2, India really started to get a foothold in the game when Virat Kohli and KL Rahul were in the middle. Kohli’s 66 was damaging, but it was Rahul’s sensational performance that helped his side to a competitive total.

The batsman scored an amazing century, finishing on 108 from 114 balls as Topley’s catch eventually stopped him in his tracks. By then India had made it to 271-4 but it was the way they finished in the last ten overs that made this game super competitive. Rishabh Pant came in and got 77 off just 40 balls and Hardik Pandya got 35 from 16 as India ramped up the tempo to reach 336. 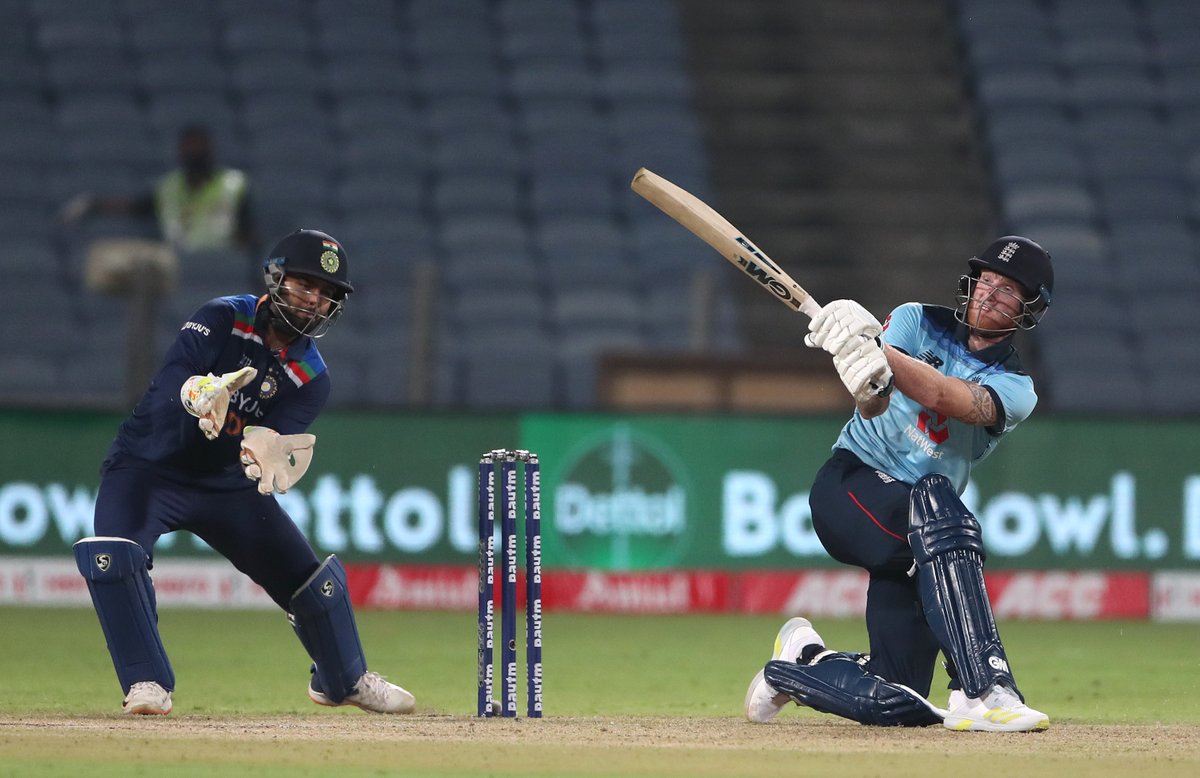 With the bat, despite Morgan’s commitment to playing attacking cricket, England started slowly, 10-0 after four overs. Then the visitors picked up the pace as Jonny Bairstow and Jason Roy set out to prove they were the best white ball opening pairing in the world. It was not the breakneck slogging we saw in the first game, but England put themselves well ahead of the run rate thanks to some brave, but sensible batting.

Both batsmen reached fifty with relatively little trouble as England hit 110 before losing their first wicket. It was a mix-up in the middle combined with some brilliant fielding by Rohit Sharma that led to Jason Roy being run out having made it to 55 off 52 balls. Bairstow called for the single and began running before Roy stuttered at half-way, hesitation from both batsmen led to Roy’s dismissal, but unlike in the first match, England didn’t immediately crumble.

Ben Stokes, England's Man of the Match, came out with a point to prove having been dismissed for just one in the first ODI, and with Eoin Morgan out, even more responsibility sat on Stokes’ shoulders at three. He got away with a run out, when absolutely coasting between the wickets, the ball hit the stumps and the third umpire gave the benefit of the doubt to the batsman, unable to determine whether any of his bat was in the crease. It is fair to say, England got lucky on this one.

Bairstow played some scintillating cricket to reach his century and even when the mix up with Roy cost the team, he quickly paired back up with Stokes to continue the run chase. He reached his century with a six and kept the score ticking over averaging more than one run per ball for his entire innings, but at the other end, it was Stokes who once again grabbed the headlines.

Having made it to 50 in 40 runs, Stokes hit Kuldeep Yadav for three sixes in a row and really started to enjoy himself in the middle, making it to 95 runs off just 50 balls. He hit 45 runs from ten balls as Bairstow stood and watched from the other end, admiring this incredible display of batting that put England on 285-1, a total better than any they managed for one wicket loss over the Test series.

Stokes was dismissed agonisingly on 99 as Bhuvneshwar got him caught behind with a short delivery. It was a sensational seismic innings from Stokes which ultimately put England in a very comfortable position as Dawid Malan came to the middle. The things started to unravel. Bairstow fell at 124 placing a shot into the hands of Kohli, before captain for the day Jos Buttler was out for a duck following a spectacular Prasidh Krishna yorker.

Three wickets in nine balls stopped England in their tracks and gave India momentum but Liam Livingstone came in on his debut to steady the ship. When England could have taken the singles to the finish, he came in and hit 27 from 21 as he and Malan safely saw the side home, with five overs to spare.

England have a playing style in ODIs that means every single ball counts. When the top three bat in this style, picking up runs at this pace with a run total to chase, Morgan’s promise to stick to this attacking style makes total sense.

x
Suggested Searches:
Tyson Fury
Manchester United
Marcus Rashford
Lewis Hamilton
F1
Air Jordan
More
cricket
World's Best Cricketer Ben Stokes Has Become England's Imperfect...
If there is one thing the British public love more than an underdog story, it is a tale of redemption. [ ... ]
cricket
England Just Fall Short Against India Despite Sam Curran Heroics...
England came up short against India, losing by just seven runs in an absolutely thrilling ODI decider [ ... ]
cricket
Three Years On, Steve Smith Deserves Big Praise For His Response...
On this day three years ago the entire sporting world collapsed on Steve Smith’s shoulders. In [ ... ]
cricket
Root's Calm Head Missed As England Collapse To 66-Run ODI Loss...
India have defeated England by 66 runs in the first one-day international in a game that will once again [ ... ]
cricket
India T20 Win Over England Could Be Perfect Precursor To 2021...
England have lost the T20 series in India 3-2 having been comprehensively beaten in the final match. [ ... ]
cricket
Blistering Buttler Leads England To Bounce-Back T20 Win Over...
England showed their resilient side on Tuesday as they bounced back from Sunday’s defeat in the [ ... ]
cricket
Kohli Takes Centre Stage As England Come Up Short Against India...
England came up short in the second T20I match v India, losing by seven wickets as Virat Kohli proved [ ... ]
cricket
Archer And Roy Star As England Sweep India Aside In Opening...
England began Twenty20 World Cup year in emphatic fashion as they hammered India by eight wickets in [ ... ]
cricket
Weather No Excuse, England Must Learn From Woeful Batting Performance...
How quickly things can change. England’s 227 run win in the First Test v India feels like a lifetime [ ... ]
cricket
Why A Massive Fourth Test Against India Could Define England's...
England’s whole year might well ride on the outcome of Thursday’s Fourth Test against India. [ ... ]
cricket
Brittle England Beaten Inside Two Days As India Survive The...
It was one of the most chaotic days of Test cricket ever but by shortly after tea on day two in Ahmedabad [ ... ]
cricket
Sidebottom Wants To See Both Broad And Anderson Play Third Test...
Former England bowler Ryan Sidebottom says England ought to select both Stuart Broad and Jimmy Anderson [ ... ]
cricket
The Hundred Can Help Revolutionise Women’s Cricket And Inspire...
The long-awaited The Hundred competition is set to revolutionise cricket and will finally kick off this [ ... ]
cricket
Should Test Cricket Lose The Toss After India's Battering Of...
England have nobody to blame but themselves for the manner of their 317-run mauling at the hands of [ ... ]
cricket
Sidebottom Hails ''Fantastic'' Root And ''Stunning'' Anderson...
Ryan Sidebottom has heaped praise on both Jimmy Anderson and captain Joe Root following England’s [ ... ]
cricket
Fantastic Jimmy Anderson Wraps Up A Statement England Win In...
England wrapped up a dominant First Test win over India on Tuesday, with Jimmy Anderson collecting three [ ... ]
cricket
100 Up! Joe Root's Timely Form Could Be The Difference For England...
He is the baby-faced batsman who slotted into England’s line-up in India in 2012-13 and immediately [ ... ]
cricket
Tailenders Is The Easy-Listening Pod That Takes An Alternative...
At the moment, we’re all enamoured with cricket, thanks to India digging in and out-saucing the [ ... ]
cricket
The New Book Shining A Light On The Biggest Scandal In Cricket...
It has been nine years since the News of the World ceased publication. Nine years. Doesn’t time [ ... ]
cricket
How Botham And England Revived The Spirits Of A Nation At The...
In the summer of 1981 a combination of spiralling unemployment and racial tension had led to riots in [ ... ]
cricket
Ben Stokes Inspires England Victory In Five-Day Test Classic
This was five-day test match cricket at its finest. Ben Stokes took the final three wickets on Tuesday [ ... ]
cricket
Batting Legend Tendulkar Warns ICC Five-Day Tests ''Should Not...
If you’re looking for a cricket batting record, odds on Sachin Tendulkar probably owns it. The [ ... ]
cricket
England Head To South Africa Test In Search Of Answers And A...
England end a historic 2019 by taking on South Africa in the First Test in Centurion this week. But [ ... ]
cricket
England World Cup Winner Moeen Ali's Conscious Uncoupling From...
“I just want to get that buzz back”. England’s Moeen Ali has continued to put [ ... ]
cricket
England Fail To Win A Test Series In A Calendar Year For First...
England have lost another Test series in 2019, which brings to a close a difficult 12 months that has [ ... ]
cricket
Joe Root Double Century Gives England A Glimmer Of Hope Against...
Joe Root hit a stunning double century to give England a slight hope of victory against New Zealand [ ... ]
cricket
Pope Steps Up After Baffling Selection Leaves England Short...
It is ever difficult to predict exactly what will unfold when England go on tour. Ollie Pope, a man [ ... ]
cricket
Book Review - Ben Stokes: On Fire
Like rugby, cricket fancies itself as a bit of a proving ground for leadership and performance techniques, [ ... ]
cricket
Ben Stokes Throws His Weight Behind ''England's Best'' Joe Root
Ben Stokes has leapt to the defence of under-fire England Test captain Joe Root following the heavy [ ... ]
cricket
The Time Has Come For Joe Root To Step Down As Captain And Focus...
Joe Root loves a soft dismissal these days.  Should England decide to move him aside as captain [ ... ]