It was all a world away from the frenzied hype of Euro 2020 gripping the nation. But on five beautifully manicured and tended lawns at the East Dorset Lawn Tennis and Croquet Club in sedate surroundings and baking heat, England have already lifted a trophy earlier in the week.

And ahead of the hugely anticipated clash against Scotland at Wembley on Friday night, a marker has been laid down ahead of the main event by England’s mallet-wielding Five Lions.

While hundreds of thousands were heading off for the nearby beaches at Bournemouth and Sandbanks, England’s croquet team were competing in Poole with Scotland, Wales and a hastily convened ‘Bombardiers’ team of Under-25 players with Ireland unable to beat the travel restrictions for a Home Internationals challenge. ​​​​ 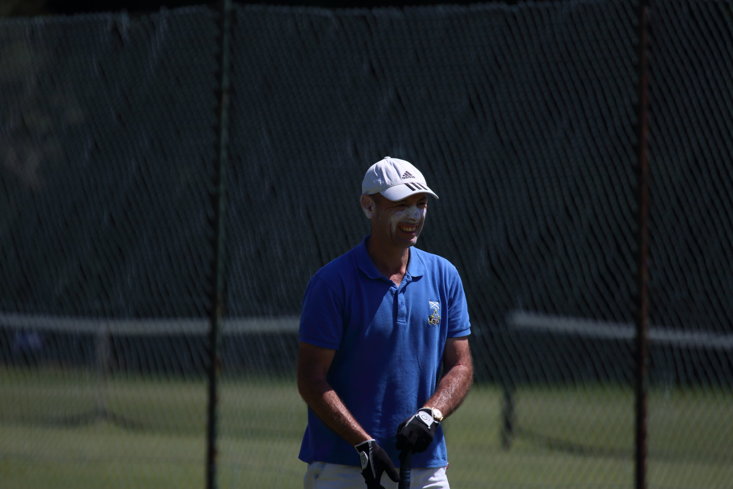 The hazy still was occasionally punctuated with the wooden clunk of ball on ball, and from further away the thwack of tennis balls before those trying out the clay disappeared to watch Novak Djokovic show how it was done in the French Open final.

This reporter’s experience of childhood croquet was limited to desperately trying to make the balls run straight on a small, rutted and patchy back garden lawn, and more often than not watching them take the considerable camber and rolling off into the waiting flower beds.

But at this level the game is an exercise in precision, tactics, strategy and ruthlessness. Make no mistake, croquet – an activity that still conjures up cliched images of cucumber sandwiches and Pimm’s - can be evil. You get your foot on the opponent’s throat, and keep it there.

In one of several parallels with snooker, a mistake will see players awaiting a next turn that could easily be half an hour away, though they have a far healthier glow about them then their pasty-faced cue-sports counterparts, since that down-time takes place sitting outside on wooden court-side seats smothered in sunscreen and soaking up the rays.

And finishing with a ‘Triple Peel’ flourish, taking both of your balls through the last three hoops together all in the same turn and then knocking them against the stick to win the game, is an achievement closer to a snooker maximum 147 than a more run-of-the-mill century break.

The successful England team were led by their captain David ‘The Beast’ Maugham, with a team made up of No1 player Samir Patel, Dominic Nunns, Mark Suter and Nick Parish – winning all three of their matches to end up as both International Challenge winners and Home International champions, wrapping things up just about as England beat Croatia at Wembley. 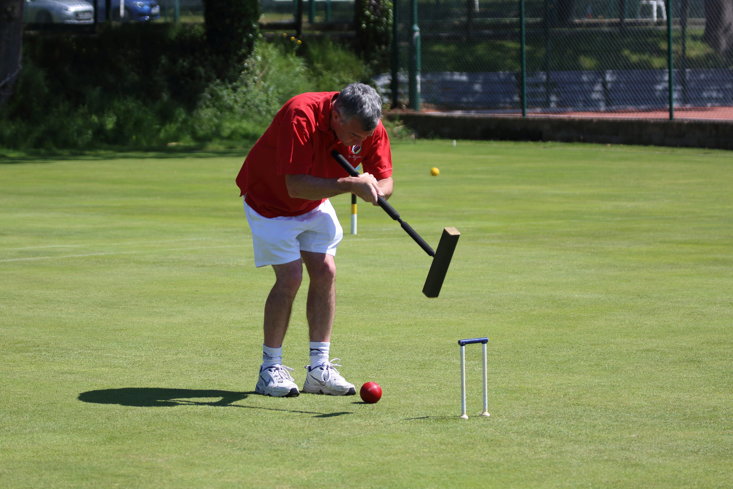 Like most sports, croquet has been badly hit over the past 16 months as England’s No1 player for the event, Samir Patel, was quick to recognise. He said, “With everything that has happened during the Covid pandemic and the cancellation of last year’s event, it was great to finally be back on a croquet court, playing for England.”

And there are clear challenges in trying to popularise the sport. One leading player once told me that the images in national newspapers in 2006 of former Deputy Prime Minister John Prescott leaning on his mallet at his official country mansion retreat of Dorneywood set the game’s image back “by about 20 years”.

And as with golf and cricket, the sport requires space in a country where the pressures to develop and build new houses are never very far away.

The upper echelons of the world rankings are dominated by players from England, Australia, New Zealand, the USA, Scotland and Wales. And in the clash of the ‘Auld Enemy’ in Poole it was the host country that came out on top 3-2 in a thriller.

Gareth Southgate and Harry Kane would almost certainly not have been paying close attention to events on the south coast – but can England’s success be an omen for a higher-octane repeat collision on Friday at Wembley?

A similar double of beating Scotland and then lifting the trophy at the end of the tournament would go down very nicely in many quarters.

x
Suggested Searches:
The Sportsman
Manchester United
Liverpool
Manchester City
Premier League
More
sports
WATCH: Hot-Dog Eating Champ Joey Chestnut Chokes Out Protestor...
The current sporting world is littered with all-time greats; Tom Brady, Lionel Messi, Cristiano Ronaldo, [ ... ]
sports
Hustle And The Best Sports Films Currently On Netflix
The Adam Sandler renaissance is in full-swing with the Happy Gilmore star’s latest effort, Hustle, [ ... ]
sports
WWE’s Class Of 2002: Two Decades of Dominance, Inside and Outside...
In 2002, just over a year removed from the ‘Monday Night Wars’ between his World Wrestling [ ... ]
sports
Muhammad Ali And The Greatest Trash-Talkers In Sport
Today marks six years since we lost the great Muhammad Ali. Boxing’s most beloved star was as [ ... ]
sports
What Did The World Of Sport Look Like When Queen Elizabeth's...
Queen Elizabeth II celebrates her Platinum Jubilee this week and to commemorate the occasion, we have [ ... ]
sports
Dream Weekend Turns Sour As Huddersfield Fail In Challenge Cup...
It was meant to be the perfect sporting weekend for the town of Huddersfield. With their football and [ ... ]
sports
Monaco, The Masters And More Unbelievable Experiences In Sport
This weekend sees the Formula One teams, fans and staff arrive in the principality of Monaco for the [ ... ]
sports
Tony Hawk's Impact On The World Of Skateboarding Cannot Be Understated...
In the Smithsonian, a baby blue Bahne skateboard sits proudly on display as part of the National Museum [ ... ]
sports
The Saudi Golf League And Other Breakaway Competitions In Sport
There appears to be a civil war looming in golf as the PGA Tour continues to fight back against the [ ... ]
sports
Britain's Top Ten Greatest Sporting Achievements Featuring Roger...
Four minutes. One mile. The seemingly unbreakable human barrier was brought tumbling down by Roger Bannister [ ... ]
sports
Triple H’s Legacy Lies With WWE’s Next Generation
All that remained was a pair of black boots. Black boots that signified the end as they stood proud [ ... ]
sports
Kevin Owens’ History-Making WrestleMania Match With Steve Austin...
The well trodden adage surmises that heroes are worth avoiding, should you ever be presented with the [ ... ]
sports
The Deadman Didn't Rise: Revisiting The End Of The Undertaker’s...
75,167 people can be just as deafening when they are dead silent as when they are roaring in unison. [ ... ]
sports
The Barkley Marathons: The 100-Mile Race That Broke All Of Its...
In 1977, James Earl Ray, the gunman behind the assasination of Martin Luther King Jr., embarked on an [ ... ]
sports
International Women’s Day: Ten Female Superstars To Watch Out...
In honour of this year’s International Women’s Day, we take a look at ten female sports [ ... ]
sports
How Sport Is Handling The Russian Invasion Of Ukraine
The Russian invasion of Ukraine has cast a shadow over our world, with an uncertain darkness hanging [ ... ]
sports
2022 Commonwealth Games: Eight Stars To Look Out For In Birmingham
In just 150 days, the eyes of the world will be fixated on Birmingham for the 22nd Commonwealth Games, [ ... ]
sports
Looking Back At The Most Calamitous Sporting Performances In...
There is nothing worse when it comes to being a professional athlete than when you have a performance [ ... ]
sports
Talent In Tartan: Why 2022 Could Be The Year Of The Scots
Scottish sport thrived in 2021, with star athletes from north of the border making waves on a global [ ... ]
sports
World Cup, Six Nations And Winter Olympics: The Must-See Sporting...
With the haziness of the New Year celebrations behind us, it is time to clear our minds and look ahead [ ... ]
sports
Most Significant Sporting Moments Of 2021: From Fury's KO To...
Sport makes us feel things. This year, we have witnessed a whole array of emotions from England’s [ ... ]
sports
Euro-Mania, Formula One Fireworks And The Best Sporting Moments...
Despite the ever-looming menace that is Covid, the past year has been an unforgettable one in the world [ ... ]
sports
Remembering The Iconic Sports Stars We Lost In 2021
As we bid farewell to 2021, there is an air of hope as we look ahead to what 2022 might bring in the [ ... ]
sports
From Lineker To Ali’s Legacy: The Sportsman’s Favourite Articles...
What a year it's been in the world of sport! Despite all the ongoing uncertainty surrounding the [ ... ]
sports
Olympic Dreams Realised, Football Justice Done: The Sportsman...
It has been an incredible year of sporting drama and intrigue. With 2021 almost in our rearview mirror, [ ... ]
sports
Football In The Trenches, Shaq Vs Kobe & Christmas Day's Special...
Sport and Christmas Day don’t mix, at least that’s what you’ve been programmed to [ ... ]
sports
Mammoth Upsets, Fairytales and History-Makers: The 2021 Sportswomen...
Despite the ever-looming menace that is Covid, the past year has been an unforgettable one in the world [ ... ]
sports
From 30 Salah Goals To A Hamilton Championship Win - What Will...
What a year it’s been for sport! Despite the ongoing issues brought around by the Covid pandemic [ ... ]
sports
From Tiger To Tyson: The Five Best Sports Documentaries Of 2021
There's been a real boom in the quality of sporting documentaries over recent years and 2021 [ ... ]
sports
Gabriel Medina, The South American Surfin' Superstar Who Neymar...
This article first appeared in The Sportsman on May 14th 2020 On grass they have Pelé, [ ... ]