Rugby
News
If England fail to build on their win against the French, more questions than ever will be asked of Eddie Jones
Simon Lillicrap
09:00, 20 Mar 2021

You’d be forgiven for thinking England’s final Six Nations game against Ireland was a dead rubber. Both sides have won two and lost two in this season’s competition and aren’t in danger of the wooden spoon, neither side can top the table, win the Triple Crown and although the Millennium Trophy is up for grabs, this hardly seems like a pivotal game on paper.

But it is. After all the criticism England have received this year, with the losses to Scotland and Wales, it seemed something clicked in the 23-20 win over France. A side who had conceded too many penalties and looked blunt going forward with the ball began to find their spark against an impressive France side who still had the Grand Slam in their sights.

However, if England regress again against Ireland and fail to build on that win against the French, more questions than ever will be asked of Eddie Jones and this England team. A good performance will prove that the early matches in this competition were just a blip, whereas a bad one could show that the problems within this squad run deeper than one off-colour performance.

Jonny May told BBC Sport: "It's funny really because I'm nervous now, because what does that mean if we don't back it up? We need to be on it this week, and we are. It is going to be a huge game and I bet Ireland are feeling exactly the same. They've had a similar campaign to us and they will be desperate to win this last game."

Having won the 2020 Six Nations and gone on a nine game winning streak as they won the Autumn Nations Cup later in the year, hopes were high that 2021 would be yet another successful year for Jones’ side. However, Scotland’s first win at Twickenham since 1983, as they defeated England 11-6, shocked the squad and they have been keen to put things right since then. 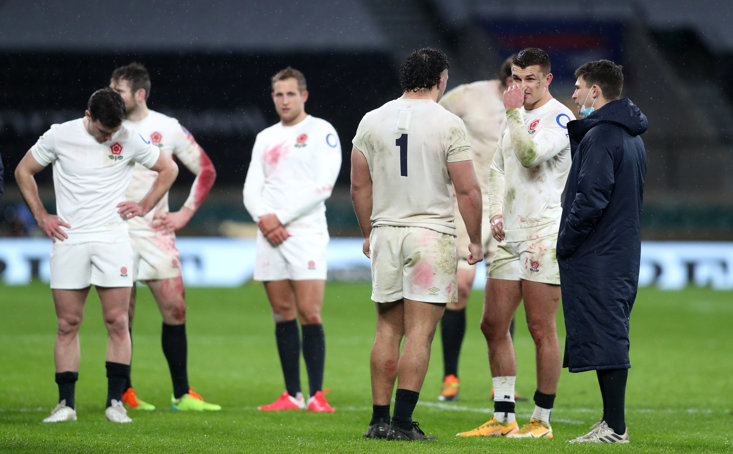 "The whole lot of us got a wake-up call against Scotland. I'm telling you, we got a smack. But that was the line in the sand we needed to have a good hard look at ourselves and change things,” May said.

This England side has been incredibly functional over the past couple of years, relying on set pieces and their strong defence to grind out wins, but for many people the success in 2020 papered over the cracks that were starting to show in England’s attack. Against Scotland, those issues reared their ugly head once again, and the whole squad suffered.

"Our set-piece and our defence was brilliant, we won games, but our attack wasn't quite right. That got swept under the rug because we were winning games,” May explained.

"And then Scotland on a day where the set-piece and defence wasn't quite where it needs to be, which will happen sometimes, it really shone a light on the fact our attack wasn't there to win us the game when it should have been. So that hit home, and we got hold of it as players, and we've been taking step forward after step forward ever since then."

Against Ireland this weekend, there may not be the big prizes at stake, but this game could dictate whether England are bouncing back and on an upward trend, or whether there are deep-set deficiencies in this side. If it is the latter, Eddie Jones may have run out of time in charge of the team.

x
Suggested Searches:
Manchester United
Liverpool
Manchester City
Marcus Rashford
Premier League
More
rugby
Morne Steyn Breaks British and Irish Lions' Hearts Again With...
Morne Steyn has broken the British and Irish Lions hearts once again with a last-gasp penalty that secured [ ... ]
rugby
British & Irish Lions' Time Concerns Are A Problem Across The...
Sport as a whole is struggling to come to terms with the concept of time right now. As The Hundred reshapes [ ... ]
rugby
Pollard Kicks Five Penalties As South Africa Level Lions Series
It was scrappy and bad tempered at times. It was difficult to watch, even. But two second-half tries [ ... ]
rugby
Rassie Erasmus Needs To Be Sanctioned Heavily, However Justified...
It took 62 minutes for Rassie Erasmus to rip apart the refereeing performance in the British Lions’ [ ... ]
rugby
Warren Gatland Inspires British And Irish Lions Comeback Win...
The British and Irish Lions’ incredible second-half renaissance stumped world champions South [ ... ]
rugby
England Emerge Victorious At Twickenham Despite Spirited Display...
England were pushed further than they probably would have expected when they took on the USA in [ ... ]
rugby
British and Irish Lions: Warren Gatland Can Reach Iconic Status...
Warren Gatland will take his British and Irish Lions squad to South Africa this summer for his third [ ... ]
rugby
Alun Wyn Jones To Captain British & Irish Lions On South Africa...
Wales legend Alun Wyn Jones will captain the British and Irish Lions squad ahead of their tour in South [ ... ]
rugby
England Dig Deep Against France To Claim Fourth Six Nations...
It wasn’t pretty but England got the job done, beating France 10-6 in a gripping low-scoring classic [ ... ]
rugby
Eddie Jones' 2021 Failures Could Set England Up For World Cup...
After a review by the RFU into England’s woeful Six Nations performance, Eddie Jones has kept [ ... ]
rugby
Wales Win Six Nations Championship After Scotland's Late, Late...
Wales have regained the Six Nations Championship they last won in 2019 after France went down to a dramatic [ ... ]
rugby
Can History Repeat Itself? When Wales And France Shared The...
Wales are still favourites to win the Six Nations championship despite missing out on the Grand Slam [ ... ]
rugby
What Do Wales Need Scotland To Do Against France To Win The...
This is an unprecedented Six Nations campaign. For the first time we have an extra game being played [ ... ]
rugby
Six Nations: Last-Gasp France Try Cruelly Denies Wales Grand...
It promised to be a ‘Super Saturday’ unlike any other and it’s safe to say it delivered [ ... ]
rugby
Late Maro Itoje Try Gives England A Much-Needed Win Over France
England got back to winning ways in the Six Nations Championship by the finest of margins on Saturday [ ... ]
rugby
The Stats Don't Lie, Ill-Discipline Has Cost England The Six...
We’ve all seen the headlines. Too many mistakes and too many penalties have cost England in a [ ... ]
rugby
Alun Wyn Jones' Has Shown In The Six Nations Why He's A Lions...
146 caps, fifteen years of service and one cheeky smile, Alun Wyn Jones has been the beating heart of [ ... ]
rugby
Poor Officiating Puts Dampener On Wales Win Over England That...
Wales have kept their hopes of a Grand Slam alive, secured a bonus point and won the Triple Crown, with [ ... ]
rugby
England Need To Be Cool, Calm And Composed Against Wales In...
Eddie Jones is imploring his England side to be on the alert for any scheming from Wales captain Alun [ ... ]
rugby
France v Scotland Six Nations Game Called Off After Latest Positive...
France’s upcoming Six Nations match against Scotland, due to take place this Sunday, has been [ ... ]
rugby
Jack Nowell Aiming For England Recall When He Returns From Injury
England and Exeter winger Jack Nowell looks set to return to action in March after being sidelined for [ ... ]
rugby
Can Eddie Jones Really Blame A Lack Of Fans For England's Six...
England’s start to the Six Nations has been underwhelming to say the least. An opening day defeat [ ... ]
rugby
It Wasn’t Pretty But England Get Back On Track In The Six Nations...
It wasn’t pretty and wasn’t as easy as past England triumphs over Italy but Eddie Jones’ [ ... ]
rugby
How The Six Nations Has Become A Pivotal Moment In Eddie Jones'...
England’s shock defeat to Scotland last weekend certainly threw up more questions than answers [ ... ]
rugby
Six Nations Blown Wide Open With Scotland's First Win At Twickenham...
This year is different. How many times have we heard that over the last twelve months? The global pandemic [ ... ]
rugby
Eddie Jones' Mind Games Can Only Help To Fuel Scotland's Fire...
Eddie Jones has been at the mind games, but it feels like he needn’t really bother. Scotland arrive [ ... ]
rugby
Betfred Super League To Return Without Scrums Due To Covid-19...
The Betfred Super League season will begin without scrums following confirmation from the RFL board [ ... ]
rugby
Three Reasons Why England Winning The Six Nations Isn't A Foregone...
England go into the 2021 Six Nations in imperious form. The defending champions have finished outside [ ... ]
rugby
England’s Beno Obano And Maro Itoje Tackle Race In Rugby In...
Rugby Union has a race issue. It’s uncomfortable to talk about or even acknowledge but it’s [ ... ]
rugby
Hard Men Of Rugby, The Book That Revels In The Legendary Tough...
The famous maxim goes that 'football is a game for gentlemen played by hooligans, and rugby union [ ... ]