Gareth Southgate has at least silenced one argument.

Imagine the World Cup had taken place when it should have. Summer would be over already. In the space of 11 days the England team has unravelled and the manager is clueless.

It’s a relief that the disastrous Nations League campaign is just a dry run for Qatar in November. Were it happening now, England would be on a plane home and facing mutiny when they touch down at Luton Airport.

Under manager Southgate’s slow and steady upward progression in the past four years this scenario is highly unlikely, but like most things in our short-tempered, even shorter attention span country, life is either glory or abject failure - there is no inbetween.

Southgate is there to take the flak. And so he did. Like a sitting duck but with far greater dignity than any of his ignorant abusers in the stands chanting ‘You Don’t Know What You’re Doing’.

The Nations League was a let down. Four games, one penalty goal, no wins and the climax a 4-0 humiliation at the hands of a deeply-flattered Hungary side who won’t get a result like that again in a generation. Yet Southgate walked unafraid toward the centre circle at a raging Molineux and applauded the fans for coming, even if they had witnessed an embarrassing defeat of their team.

As an honest man, Southgate will have no problem taking a hit in popularity and well done to him for having the courage to face the backlash just seconds after the final whistle when negative adrenaline levels were at their highest.

Only now the man who made waistcoats fashionable again four years ago in Russia en route to the World Cup semi finals and who led England to its first major final since 1966 is being seriously questioned.

Yet the overriding problem is not with the England team, its personnel or its coach. Come November in Qatar when the World Cup does start, it will be a different story.

The problem is that the constant shifting of expectations in a northerly direction has taken away the chance for managers like Southgate to throw around a few ideas and see what happens. 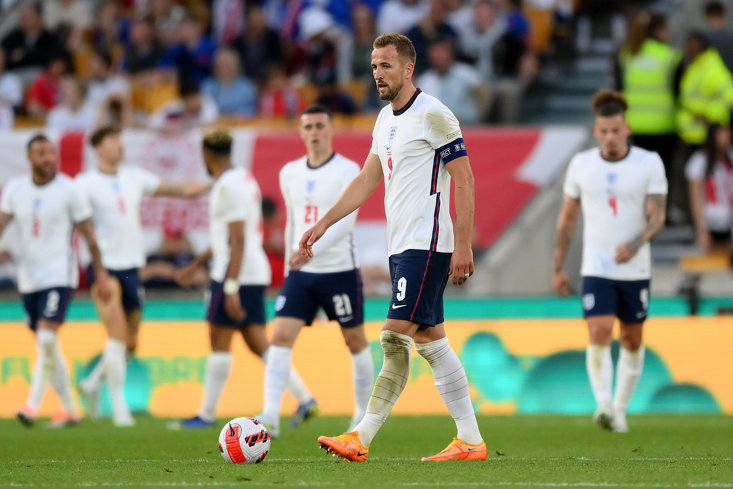 Doing away with ‘meaningless friendlies’ was a desperate attempt to make international football compete with the bloated club calendar across Europe, where no team is allowed a single 90 minutes to step outside the hothouse of winner-takes-all.

Meaningless friendlies actually did have some meaning. They were there so that managers like Southgate could tinker around with the team and try new things. Unlimited substitutions, a relaxed atmosphere and it didn’t matter a jot if you lost because everyone knew in advance this was a practice match.

Unfortunately for Southgate, he is operating at a time when international football in Europe at least is considered distinctly second best to the exploits of Manchester City, Liverpool, Chelsea, Manchester United. Revving up games between countries is a last-ditch bid to compete with the ever-expanding influence of the Champions League.

It has been a time-honoured and yes, sometimes, wearying tradition that England warm up for a World Cup with dead rubbers against varying countries to become acclimatised for the looming competition ahead.

Games versus Nigeria, Costa Rica, Peru. All with nothing really hanging on them except for whoever is boss to play around with tactics and selection, while getting his team into tournament mode.

That won’t be the case this year because England play Italy then Germany in the Nations League in September before the domestic calendar takes over, then it is straight into the first Group B match against Iran on November 21.

There is a genuine threat that Southgate’s team will have been relegated from Nations League A by then, piling pressure on the national team just at the point it needs the country behind it.

International managers face different challenges to those at club level. They have their squads together only sporadically and they cannot buy their way out of trouble.

That is something that needs to be taken into account before, during and after each match and it might not be a bad thing to rethink the value of the meaningless friendly.