Football
News
Aidy Boothroyd's tenure hasn't been up to scratch, so it's time for positive change
Simon Lillicrap
15:00, 08 Oct 2020

If you’re anything like us, you will have been sat pulling your hair out at home on Wednesday night as England’s Under-21 stars were somehow held to an embarrassing 3-3 draw with Andorra. So you can imagine how poor Eddie Howe might have been feeling.

While the man who led Bournemouth to unprecedented heights over the past decade is currently out of work, our nation’s finest young talents are being failed under the directionless leadership of Aidy Boothroyd, who has held this post since 2016 and has overseen disappointment at every major tournament while other age groups have flourished.

England’s under 19s, when managed by now Bristol City assistant Keith Downing, won the European Championships in 2017, while the under 20s and under 17s won their World Cups in the same year under Paul Simpson and Steve Cooper respectively. Aaron Ramsdale and Ryan Sessegnon, now under Boothroyd’s management, were both key members of Downing’s successful squad while Callum Hudson-Odoi shone for Cooper, so these players know exactly what it takes to win trophies for their country.

To put this latest result in perspective, Andorra have won just two of 57 internationals at this level and this is a seriously talented group of England players. The brightest youngsters are now commanding hefty transfer fees, Ben Godfrey has just joined Everton for £25m, Jude Bellingham commanded a similar fee when he moved to Borussia Dortmund, as did Ebere Eze when he joined Crystal Palace this summer. The squad isn’t the issue. The manager is. 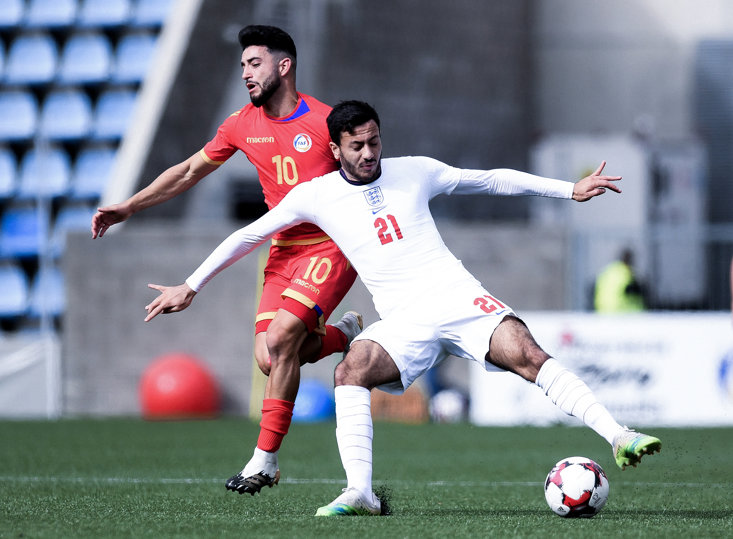 After being sacked by the likes of Coventry and Northampton, he found himself in his current role by a stroke of luck having been promoted ahead of time when Gareth Southgate was unexpectedly parachuted in to take over the England senior team. The results? At the 2019 U21 Euros, with a squad that contained James Maddison, Dominic Calvert-Lewin, Tammy Abraham, Phil Foden and Aaron Wan-Bissaka, England went out in the group stage, failing to win a single game, and more struggles have followed. The Young Lions need a manager who can buy into this new passing philosophy, develop young players and has managed in the Premier League, rather than failed in League Two.

The former Bournemouth boss has long been touted for the senior England side, but the under-21 job could be the perfect fit for the 42-year-old. At Bournemouth, he helped young English players flourish. Aaron Ramsdale, Lewis Cook and Jack Stacey all found their feet under Howe while Manchester City’s Dutch defender Nathan Ake was schooled at the Vitality Stadium.

Howe has previously claimed he would “miss day-to-day coaching” too much to take the England job, but having walked away from Bournemouth this summer, this could be the perfect time to get him on-board. His style of play suits this side, he has managed big-name players and proved he has the credentials for the job.

What’s more, with under-21 experience under his belt, there would be no finer candidate to step up to the senior job once Gareth Southgate’s time as head coach comes to an end. Howe would shine just as Southgate has, and England could promote from within, giving continuity and a breeding ground for success.

The young players would be afforded the opportunity to step up as Howe would know what they are all about, while the more senior players would respect the reputation he has been able to build up over the past decade.

Boothroyd has had four years in the job and failed every major test. It is time for change in the England set-up and we need a man who we can completely trust with our incredible generation of young talent.

Eddie, your country needs you.