Powell tucked into the tourists’ feast of left-arm seamers as he became only the third player from the Caribbean, after Evin Lewis and ‘Universe Boss’ Chris Gayle, to make a hundred in the shortest format.

The Jamaican stroke-maker smashed 10 sixes during his blistering 53-ball 107 and was ably supported by Nicholas Pooran’s 70 off 43 balls at the Kensington Oval.

Explosive Powell and Pooran powered the hosts to an outstanding 224/5 with a swashbuckling 122-run partnership — the highest ever third wicket stand for the country in T20 cricket.

The No 1 T20 ranked side in the world gave the mammoth chase a good go, but finished their innings well short on 204/9 despite entertaining half centuries from Tom Banton and debutant Phil Salt.

Kieran Pollard’s side lead the series 2-1 with two games remaining after winning the highest-scoring T20I in the country’s history.

England named three debutants in a much-changed side from the one which secured a nervy one-run win on Sunday as Salt, Harry Brook and George Garton were handed their caps.

Captain Eoin Morgan handed the reins to Moeen Ali after picking up a niggle in the warm up, whilst wicket-keeper Sam Billings missed out through illness. Chris Jordan was left out as England chose to employ three left-arm pace bowlers.

ICC
@ICC
What a day for Rovman Powell! #WIvENG 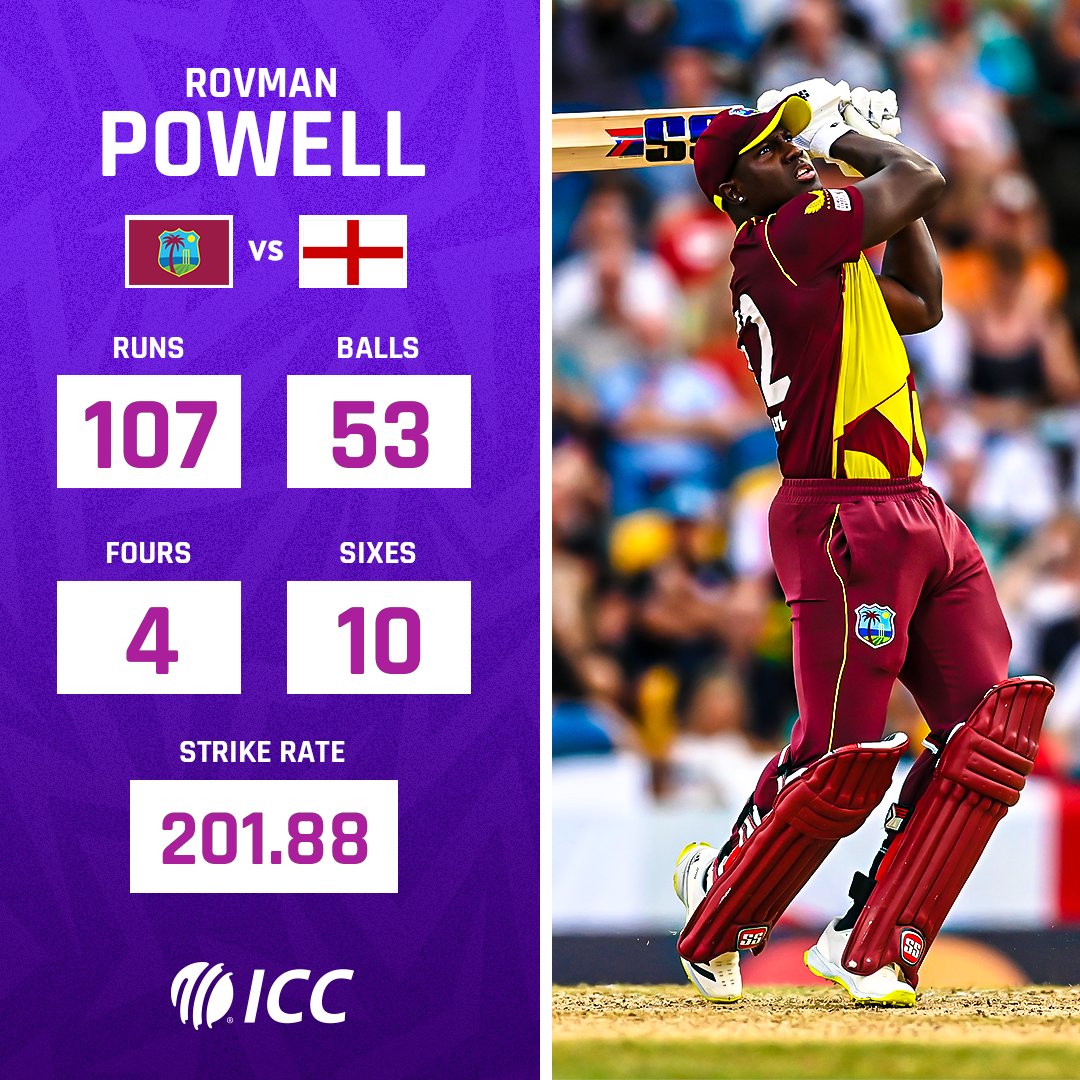 Salt fittingly made his first T20I appearance in his old hometown. The Sussex opener grew up in Barbados and was in the crowd as England lifted the T20 World Cup at the ground in 2010.

But it was Garton who was first to make an impact when he bowled Brandon King in his first over on the international stage.

Left-handed Pooran found some form after a slow start to the series. He smashed three sixes in the six-over powerplay to set a solid platform.

And after that it was the Powell show. The 28-year-old unleashed his phenomenal power and punished England’s wayward bowling as he cleared the ropes with remarkable regularity.

The wily leg-spin of Adil Rashid was once again economical as he took 1/25 off his four overs. But it was an evident gameplan from Pollard’s charges to see off the threatening wrist spinner and attack England’s weak links with wickets in hand.

Garton, Tymal Mills and Liam Livingstone were belted into the Barbados stands at will as they leaked 151 runs in their 11 overs!

Captain Pollard hit two of the last three balls for four as his side posted a massive 224.

England started brightly and hit six sixes in the first eight overs before James Vince was the second wicket to fall. The manner of his frustrating dismissal epitomised his England career; the Hampshire batter showed glimpses of his undoubted talent before inexplicably throwing his wicket away.

Stand-in skipper Ali also played a loose shot to a wide delivery for the third straight innings and the visitors were tottering at 87/3.

Destructive opener Banton kept England in touch with a quick-fire 73 off 39 balls to show why he has been hotly-tipped as a future white-ball star since he burst onto the scene.

The unlikely run chase was well and truly on before Banton was outfoxed by a crafty Pollard slower ball to become the fifth wicket to fall.

Pollard frequent changes of pace bamboozled, and most importantly, restricted England in the middle overs as he recorded fine figures of 2/31 in an absolute run fest.

Salt showed how dangerous he is and underlined his potential value as part of the squad for this year’s T20 World Cup. He peppered the bowlers for five sixes as he entertained the lively crowd at the end, but it was all a little too late to pull off a heroic heist.

Powell, returning after being left out of the side, said: “I found out I was playing last night. I know I can strike the ball good. There was a big side and a short side so having a left-hand, right-hand partnership with Nic was really good.”

England’s Ali refused to be all doom and gloom. He said: “The West Indies played really well. They are so powerful and they are so hard to bowl at when they’re in. It just takes a fantastic partnership like that to take the game away from you.

“We were there all the way until right at the end so I’m really proud of the boys.”

The series is set up for a cracking finale over the weekend with the penultimate game played on Saturday night, before the fifth and final match on Sunday.