Cricket
News
The hosts phenomenally chased 296 inside just 55 overs as they romped to an emphatic win.
Shane MacDermott
16:18, 27 Jun 2022

Captain Ben Stokes saluted his side after England secured their first home series whitewash in nine years as they completed a fine 3-0 victory over World Test Champions New Zealand at Headingley.

The new ‘Bazball’ philosophy has taken England’s batting to a whole new stratosphere and the captain-coach combination with Ben Stokes has worked wonders during their first assignment.

The hosts phenomenally chased 296 inside just 55 overs as they romped to an emphatic win.

Yorkshire stars Joe Root (85) and man-of-the-moment Jonny Bairstow (71) delighted their home fans as they finished the series in style with a hugely-entertaining unbeaten stand.

Bairstow, who kept Brendon McCullum’s side in the game with his first-innings ton, continued his brilliant form as he smashed the country’s second fastest Test fifty — off only 30 balls — just days after he produced the second fastest Test century by an Englishman at Trent Bridge.

Fittingly the burly batter ended the series with a monstrous six. And just who knows how far this team can go under their brand new stewardship?

England have raised the bar in one-day cricket over the past seven years. They hold the three highest scores in the format and came agonisingly close to becoming the first team to smash 500 in an ODI last week against the Netherlands.

England Cricket
@englandcricket
There was only one way to win it really wasn't there? 😃
Scorecard/clips:
🏴󠁧󠁢󠁥󠁮󠁧󠁿 #ENGvNZ 🇳🇿
184
2507

And the fifty-over world champions have decided to take that aggressive ethos into the longest format of the game and it has reaped its rewards in this series.

Bairstow, widely regarded as one of the best white-ball cricketers in the world, has benefitted the most from the new mindset and crashed 394 runs in a potentially career-defining series for the middle-order batter.

And skipper Stokes said: “It has gone really well. To walk away with a 3-0 win over the best team in the world is very special. The team has been phenomenal.

"For me when I took over this job it was about more than results, it was about changing mindsets towards Test cricket. I wanted them to have fun and enjoy representing their country. But to say that we've turned it around so quickly is unbelievable. I can only do so much, there's a huge amount of credit due to Brendon for his influence and the players for buying into it.”

Former captain Joe Root was named man of the series after a phenomenal month back in the ranks. The stylish number three has a smile back on his face and it proves he is by far and away the best Test batter on the planet.

We’ve seen him play some incredible reverse laps for six. Something you’d associate with T20 cricket and this is the brand which England are embracing.

And man-of-the-series Root said: “It is special. It has been a strange few weeks from where we've been over the last few months in Test cricket. It has been quite a ride but it has been so much fun and really enjoyable. It is phenomenal to start Ben's era like that and hopefully we can go from strength to strength from here.

"I've enjoyed batting - it has been quite nice. It has been great. It has been a relaxed environment and just being able to solely focus on batting. There are a lot of elements to it that makes things a lot easier for me, but I'll support Ben however I can. I was excited when Brendon McCullum got the job and I didn't expect it. Not having the captaincy means I wasn't involved in those discussions and he has been brilliant in the dressing room. What a great start to his tenure and we'll see how things go moving forward." 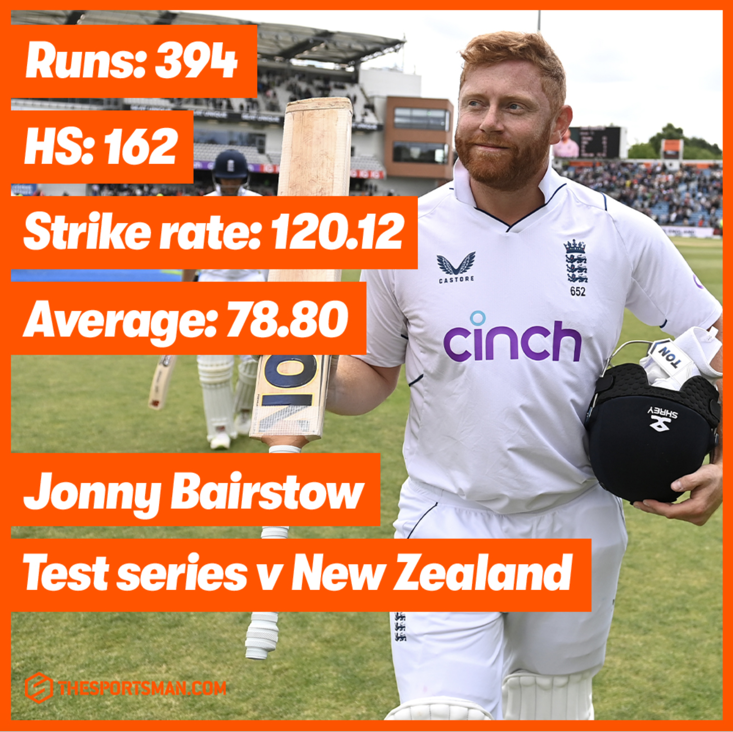 Left-arm tweaker Jack Leach took a maiden ten-wicket match haul and that will do him the world of good after a tough couple of years with a lack of form and illness.

The signs are bright for this England side and the sky looks to be the limit. It will be interesting to see how they fair against India at Edgbaston next week for the final game of last year’s five-match series.

For New Zealand they could be at a crossroads themselves. Is it the end of this great side? Captain Kane Williamson struggled with the bat.

Daryl Mitchell was the outstanding batter as he racked up a phenomenal tally of over 500 runs in the series with a ton in every game.

Trent Boult caused England problems with the new ball, but a lack of backup bowling left the attack looking weary and at times hopeless.

Williamson reflected: "It is frustrating to lose the series but there were a lot of positives.

"There is clearly a new theme to England's approach and they did it extremely well. It was a highly competitive series but they won those fine margins and those moments that changed the outcome of the matches."

x
Suggested Searches:
The Sportsman
Manchester United
Liverpool
Manchester City
Premier League
More
cricket
Everything You Need To Know About The Hundred 2022
The Hundred returns tomorrow for its supposedly ‘difficult second album’. However, all [ ... ]
cricket
An ODI Icon: The Day Ben Stokes Won The World Cup For England
He arrived at the crease with England 71 for three in the 20th over. They were behind the rate and losing [ ... ]
cricket
Edgbaston To Employ Undercover Abuse Spotters For England v...
Cricket chiefs are set to employ “undercover football crowd-style spotters” at Edgbaston [ ... ]
cricket
On Song England Beat India By Seven Wickets With Record Chase...
Wow. What a difference a year makes!  Last summer England were on the brink of being hammered 3-1 [ ... ]
cricket
Jos Buttler Named Captain Of England White-Ball Cricket Teams
Jos Buttler has been appointed captain of the England Men’s white-ball teams by the England & [ ... ]
cricket
Ducks, Books And Cricket Sucks: The England v India Test Series...
Cast your mind back to a time when Chris Silverwood was England coach and Joe Root was captain. When [ ... ]
cricket
England's Greatest: Eoin Morgan Will Go Down In History As A...
When Eoin Morgan retires from international cricket on Tuesday, a gap will appear in the England dressing [ ... ]
cricket
WATCH: Henry Nicholls' Bizarre Dismissal Against England
We have just witnessed one of the most incredible things ever seen in a Test cricket match! During [ ... ]
cricket
Is It Time For England To Separate Their Test Side From ODIs...
Joe Root was England’s top scorer at the last Cricket World Cup. Jonny Bairstow leathered back-to-back [ ... ]
cricket
Duck, Duck, Excuse: Captain Morgan's On Shaky Legs As England...
We have seen two sensational ODI performances from England in the Netherlands. After hitting a world [ ... ]
cricket
England Smash ODI World Record As Jos Buttler Hits 162 in 70...
England have just done something truly spectacular. Against the Netherlands, Eoin Morgan’s side [ ... ]
cricket
Brilliant Jonny Bairstow Batters New Zealand As England Take...
Jonny Bairstow smashed England’s second fastest ever Test century as Ben Stokes’ side wrapped [ ... ]
cricket
Unstoppable Jimmy Anderson Brings Up 650 Wickets With Plenty...
When a young James Anderson conceded a no-ball as his first act as a Test bowler and went on to concede [ ... ]
cricket
Why Ben Stokes' And Joe Root's Differing Personalities Suit...
As England prepare to take on New Zealand, looking to win back-to-back Tests on home soil for the first [ ... ]
cricket
Joe Root: England's Greatest Ever Batter Now Has The World's...
If there was ever any doubt about Joe Root’s class, it is simply beyond debate after his match-winning [ ... ]
cricket
Majestic Joe Root Leads England Into A New Era With New Zealand...
The new era of English cricket started with a bang as Joe Root’s masterclass hundred led England [ ... ]
cricket
The English Cricketing Summer Won't Be The Same Without Shane...
There’s a piece of the English summer missing. New Zealand wickets fell at regular intervals on [ ... ]
cricket
New Era, New Hope? England Cricket Seeking A Fresh Start After...
A new Test summer brings a new captain, new coach, new managing director and new approach to English [ ... ]
cricket
Brendon McCullum Not Afraid Of England Challenges With Ben Stokes...
Brendon McCullum strolled around Lord’s, soaking up the ‘Home of Cricket’ as [ ... ]
cricket
Stokes The Skipper: However Long It Lasts, It Should Be One...
He dragged England from the brink in the 2019 World Cup final to help record the most dramatic victory [ ... ]
cricket
Joe Root's Resignation Leaves England's Men's Test Team At An...
Now what do England do? They have failed to win any of their last nine Men’s Tests, have one victory [ ... ]
cricket
Everything You Need To Know About The Hundred 2022
The Hundred is back for its second edition and with the draft having taken place earlier this week, [ ... ]
cricket
Why The Hundred Deserves The Main Billing Ahead Of Suffering...
While England’s women flew the flag proudly for the nation during the recent World Cup, England’s [ ... ]
cricket
England Suffer Final Heartbreak As Australia Win Women's World...
England suffered heartbreak on the grandest stage as history makers Australia blasted their way to a [ ... ]
cricket
Can Underdogs England Secure Most Unlikely World Cup Win vs...
England have risen like a phoenix from The Ashes and are out for redemption in the Women’s World [ ... ]
cricket
Can Heather Knight's England Complete Staggering Turnaround...
Resurgent England have produced a remarkable turnaround to keep their Women’s World Cup title [ ... ]
cricket
Root Of The Problem: Do England Need A Change Of Captain?
It’s true: England have become the laughing stock of world cricket. So, has the time come for [ ... ]
cricket
West Indies vs England Preview: Lifeless Pitches Will Kill Test...
Sir Geoffrey Boycott had it right when he said “The future of Test cricket is at stake — [ ... ]
cricket
England Once Again Fail To Find Knockout Blow In Hard-Fought...
England captain Joe Root stressed he saw plenty of “progression” from his side after a gruelling [ ... ]
cricket
Shoots Of Recovery: England Batsmen Finally Re-Pay Under Fire...
England endured an Ashes series to forget. Hammered by arch-rivals Australia, skipper Joe Root just [ ... ]