Cricket
News
It was a step too far for Heather Knight's side Down Under
Shane MacDermott
12:10, 03 Apr 2022

England suffered heartbreak on the grandest stage as history makers Australia blasted their way to a record-extending seventh Women’s World Cup title at the Hagley Oval.

Meg Lanning’s side shattered Heather Knight’s hopes and dreams, and many records to boot, as they simply outclassed their opponents to lift the biggest trophy in the sport once again in Christchurch.

Australia, who have lost just one of their last 38 ODIs, went into the final as overwhelming favourites after breezing into the showpiece with an impressive perfect 100 per cent record.

And they showcased why they are widely considered as one of the best sporting sides in the world as they added the 50-over trophy to their T20 World Cup win and recent Ashes triumph.

England were huge underdogs to retain the trophy they won back in 2017. But they were desperate to turn the tables on their old rivals after being hammered Down Under just weeks before their title defence began.

They turned their faltering form around with five wins on the spin to give themselves a shot at becoming the first team since Australia in 1988 to successfully defend the Women’s World Cup.

But normal service resumed after Captain Knight, who stressed she did not regret the decision, decided to bowl first in perfect batting conditions. And if Knight does not rue that costly error, then she will definitely rue the dropped catches which lost her team the final.

England dropped Alyssa Healy, who went on to become the first ever women to surpass 500 runs in a World Cup, and Rachael Haynes — who finished with a hefty 497 herself — in the same over.

England Cricket
@englandcricket
🏆 Five years as World Champions
🌏 Three months on the other side of the world representing their country
🦁 A fight back from the jaws of World Cup elimination
💪 A team that give everything for each other
❤️ A group of players that make us proud
Thank You. 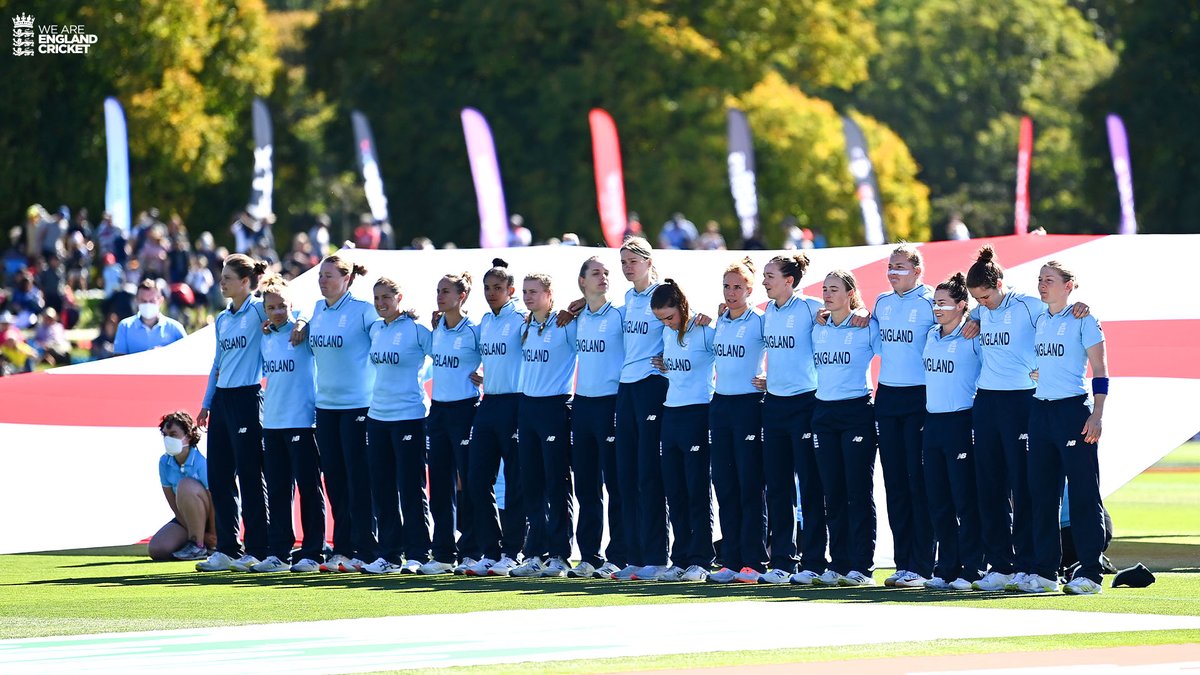 Nat Sciver batted superbly to score an unbeaten 148, but England were never really in contention after being set a mammoth total, which would have been a world record run chase in Women’s ODIs, and were eventually bowled out for 285.

A crestfallen Knight admitted: "It has been a rollercoaster of a tournament. There is pride at the way we've fought and come back after the three losses. There are a lot of positives. The fact that we've shown that character and resilience to turn it around and be within a shot of winning the World Cup. Unfortunately, one win was too many for us.

"I guess we didn't quite find an answer [to Australia's batting]. It was an amazing wicket, and if we had kept them to just about 300, probably par, we were in with a good chance of chasing it down.

“You can judge the decision to bowl first in hindsight, but I wouldn’t change it.”

Successful skipper Lanning was understandably ecstatic after the dominant win and after lifting the trophy she said: “We’ll celebrate this one pretty hard! I'm really pleased with that. This tournament has been a long time coming - it has been in the back of our minds and there are no doubts we wanted this trophy in our cabinet. It has been an amazing effort over a number of years and to finish it off like this is amazing.

"Healy's knock was incredible. To do it in a World Cup final, I am probably not surprised, to be fair she's done it before as well. To be able to come out and play so well, to play those shots she was playing was ridiculous.”

x
Suggested Searches:
The Sportsman
Manchester United
Liverpool
Manchester City
Premier League
More
cricket
Stokes The Skipper: However Long It Lasts, It Should Be One...
He dragged England from the brink in the 2019 World Cup final to help record the most dramatic victory [ ... ]
cricket
Joe Root's Resignation Leaves England's Men's Test Team At An...
Now what do England do? They have failed to win any of their last nine Men’s Tests, have one victory [ ... ]
cricket
Everything You Need To Know About The Hundred 2022
The Hundred is back for its second edition and with the draft having taken place earlier this week, [ ... ]
cricket
Why The Hundred Deserves The Main Billing Ahead Of Suffering...
While England’s women flew the flag proudly for the nation during the recent World Cup, England’s [ ... ]
cricket
Can Underdogs England Secure Most Unlikely World Cup Win vs...
England have risen like a phoenix from The Ashes and are out for redemption in the Women’s World [ ... ]
cricket
Can Heather Knight's England Complete Staggering Turnaround...
Resurgent England have produced a remarkable turnaround to keep their Women’s World Cup title [ ... ]
cricket
Root Of The Problem: Do England Need A Change Of Captain?
It’s true: England have become the laughing stock of world cricket. So, has the time come for [ ... ]
cricket
West Indies vs England Preview: Lifeless Pitches Will Kill Test...
Sir Geoffrey Boycott had it right when he said “The future of Test cricket is at stake — [ ... ]
cricket
England Once Again Fail To Find Knockout Blow In Hard-Fought...
England captain Joe Root stressed he saw plenty of “progression” from his side after a gruelling [ ... ]
cricket
Shoots Of Recovery: England Batsmen Finally Re-Pay Under Fire...
England endured an Ashes series to forget. Hammered by arch-rivals Australia, skipper Joe Root just [ ... ]
cricket
Strauss And Collingwood Era Begins As England Aim To Restore...
England’s new-look Lions begin their three-match tour of the West Indies on Tuesday desperate [ ... ]
cricket
Australian Cricket Legend Shane Warne Dies At 52
Australian cricket legend Shane Warne has died at the age of 52 after a suspected heart attack. Warne, the [ ... ]
cricket
Australia, New Zealand Or England: Who Will Win The Women's...
We’re back in New Zealand for a women’s Cricket World Cup, 22 years after the last tournament [ ... ]
cricket
England's Women Can Redeem Winter Of Discontent With World Cup...
England head to this year’s ICC Women’s World Cup in New Zealand hungry to win their [ ... ]
cricket
England Cricket In Chaos: More Questions Than Answers, But What's...
England have become the laughing stock of world cricket this winter.  It was a shocking showing [ ... ]
cricket
England's Women Round Off Dismal Ashes Winter With Another Heavy...
England’s miserable Ashes came crashing to a horrible end as they were resoundingly thrashed by [ ... ]
cricket
Women’s Ashes: Australia Seal Series Win After Dismal England...
An England cricket team collapsing in a heap in Australia, it’s the recurring nightmare for English [ ... ]
cricket
England’s Ashes Over As Australia Put Them To The Sword In Canberra
England women knew they needed to win the opening One Day International against Australia to keep their [ ... ]
cricket
Should Eoin Morgan, England's Greatest Ever White Ball Captain,...
Eoin Morgan will always be revered as England’s greatest ever white-ball captain, but has the [ ... ]
cricket
England's Men Beaten Again By West Indies As Winter Of Discontent...
England’s sorry winter went from bad to worse as they suffered a shock 3-2 T20I series defeat [ ... ]
cricket
More Test Matches Please! Women's Ashes Thriller Leaves Us Wanting...
The enthralling finish to the women’s one-off Ashes Test highlights the need for the sport to [ ... ]
cricket
England And Australia Draw In One Of Best Test Matches In Women's...
WOW. Just wow. What a game of Test cricket! England’s men really put us through the ringer when [ ... ]
cricket
Moeen Ali Inspires England To Keep T20 Series Well And Truly...
Take a bow Moeen Ali! England’s stand-in skipper stood up and produced when it really mattered [ ... ]
cricket
Rain Washes Away Chances Of Unlikely England Victory In The...
Captain Heather Knight and veteran bowler Katherine Brunt set up an unlikely shot at victory in the [ ... ]
cricket
Women's Ashes: Heather Knight's Superb Century Keeps England...
England skipper Heather Knight constructed a stunning unbeaten century on the second day of the Ashes [ ... ]
cricket
Women's Ashes: Australia Take Control As England Let Early Advantage...
Australia are in command of the solitary Women’s Ashes Test after England were made to rue their [ ... ]
cricket
England's Woeful Winter Continues As West Indies Secure 20-Run...
England’s woeful winter continued as Rovman Powell’s devastating history-making hundred [ ... ]
cricket
10 Days After A Broken Jaw, Beth Mooney Wants To Terminate England's...
Australia’s cricket culture has long been built on being hard and they don’t come much tougher [ ... ]
cricket
England Edge West Indies By One Run As They End Miserable Losing...
Finally! Finally England have given their loyal fans back home something to cheer about.  It’s [ ... ]
cricket
It’s Not The Ashes, But England’s Men Are Embarrassingly Hammered...
Optimism. Hope. Belief. Please give us something England! What a torrid winter it’s been for our [ ... ]