England’s penalty loss to Portugal in 2006 was one of the most heartbreaking of the lot. This was the Golden Generation at their peak, and they travelled to Germany with a genuine shot of winning that World Cup. But ahead of England’s 2022 quarter-final with France, Paul Robinson, the goalkeeper 16 years ago, reflects on his experience.

“We were down to 10 men so we were in ‘get through the game’ mode,” Robinson tells Betfred TV, citing Wayne Rooney’s shock sending-off. “We were absolutely delighted to get to penalties, playing against a good Portugal side down to 10 men. Spent a lot of the time in a low block, defending trying to get a clean sheet to get as far as we can and take us to penalties and then it is a lottery. So in that game, the mentality was probably different to what it would have been with 11 men.”

Rooney’s sending-off certainly changed the landscape of the game, but having lost to Portugal on penalties two years earlier, surely there was a sense of trepidation from an England squad that contained the likes of Steven Gerrard, Frank Lampard and Rio Ferdinand. But Robinson, who hadn’t played at Euro 2004, was hoping to become the hero. 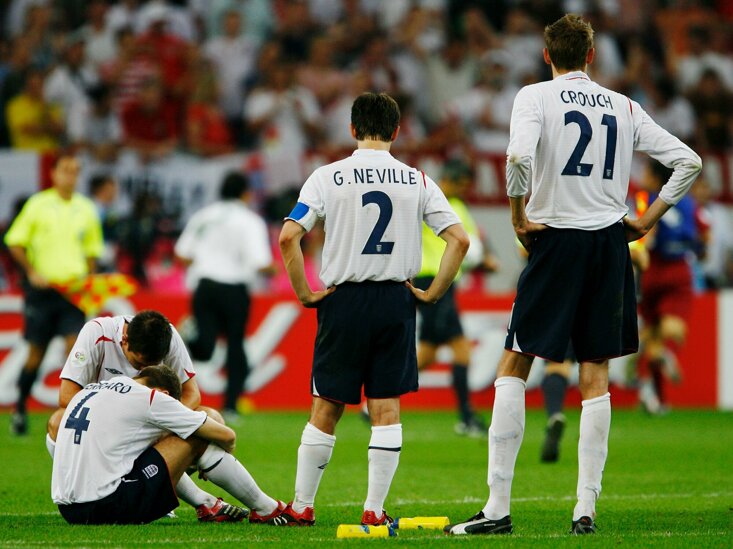 “I was looking forward to penalties, I couldn’t wait because you have nothing to lose and you can potentially be a hero,” he says. “I did so much work and research with Ray Clemence at the time, who was my goalkeeping coach. You watch so much footage of penalty takers, I knew exactly what order they were coming up in and you watch penalty takers. There’s no point just watching penalty takers for the sake of it. You need to watch a penalty taker when he is under pressure. We worked out what was their go-to penalty, or their safety penalty.

“So I knew exactly what order they were coming up in, and I knew exactly which way I wanted to go. If I had an intuition at the time, because you can watch them and I used to watch the players’ feet when they put the ball down. Subconsciously, they would plant their foot, their supporting foot, the way they are going to shoot.”

Robinson didn’t manage to save a penalty, but Portugal missed the target twice as England were offered a great chance to win the shootout. However, misses from Lampard, Gerrard and Jamie Carragher condemned them to another early exit and the country was left to stew on what might have been.

“Going back to the research now, the striker knows you’ve done that research,” Robinson reflects. “They know you know everything about their penalty taking and their technique. With Cristiano Ronaldo on the deciding penalty, I knew his favoured penalty was whipping it to my right, so I wondered whether he was going to double-bluff me. But I stuck with the research and he put it to my left.”

Moving things on to the present day, and England have a goalkeeper who has already won a World Cup penalty shootout in Jordan Pickford. He was the hero against Colombia four years ago and stopped two penalties against Italy in the Euro 2020 final, so Robinson has full faith in him to deliver again.

“I think he’s good, he has proved before that he is,” he explains. “He’s got the mindset where he can get into the striker's mind. I think he can be annoying at times for strikers. You have to affect people walking up to take a penalty. Whether it is taking you time, coming off your goal-line, scuffing the penalty spot up, a few of the dark arts to give your team the advantage. No matter how many times you practise penalties, you cannot recreate that atmosphere. When you’re walking up to take a penalty and you know that half the world is watching you and if you miss you are likely to go out. Use that to your advantage, put even more pressure on the striker. From a goalkeeper’s point of view, he will do that.”

Pickford might have shown his worth from 12 yards, but will there be a hangover from any of the penalty takers after that heart-breaking loss to Italy 18 months ago?

“I think Bukayo Saka would be the one, you look at his age and potentially what that could have done, but he’s had the best season of his career,” Robinson states. “He’s now at a World Cup, he’s taken penalties at club level, that is well behind them but the experience - they won’t have a fear of missing now. Because what can happen? It can’t get any worse than what happened before. If we miss and go out it isn’t going to be as bad an experience as it was before. They’ve been there and done it and they’ll be stronger people and stronger men for it.”

Betfred World Cup Odds*
x
Suggested Searches:
The Sportsman
Manchester United
Liverpool
Manchester City
Premier League
More
football
Sabitzer Signing Shows Man Utd Are Smarter As They Ease Into...
Manchester United have reached their first domestic cup final since 2018. After triumphing 2-0 over [ ... ]
football
The Return Of Deadline Day: Boehly's Trolley Dash, United's...
It had all started to get a bit sad. The excitement of deadline day was a collective, yellow-tied delusion [ ... ]
football
Champions Next Year? The Key Role The League Cup Has Played...
Barring a complete and utter disaster at Old Trafford, Manchester United will compete in the Carabao [ ... ]
football
Special Relationship: Jorginho Is The Latest To Move Between...
Everyone in football knows that you shouldn’t strengthen your rivals. Whether it be localised [ ... ]
football
The Sportsman's Football Power Rankings: Liverpool Slump Dumps...
Everyone's back off their winter holidays now and all hell has broken loose. European champs Real [ ... ]
football
Local Hero Sean Longstaff Sends Newcastle United To First Major...
‘Tell me ma, me ma, I won’t be home for tea, we’re going to Wembley’  St [ ... ]
football
Tony Pulis: The 'Old School' Manager That Ripped Up The Premier...
‘Yeah, but can he do it on a cold Tuesday night at Stoke City?’ Never has one manager given [ ... ]
football
Alessia Russo And The Window Into The Future Of Women's Football...
As ever, a big transfer bid has stolen the headlines on January 31. It’s been a fair while since [ ... ]
football
Deadline Day LIVE: Latest Deals & Transfers From Around Europe
Hello and welcome to The Sportsman's Deadline Day LIVE, a blog that will be providing you with the [ ... ]
football
How The New Napoli Are Making History To Match Maradona's Sensational...
There’s something different about football in Naples. With its foreboding stadium, its fervent [ ... ]
football
A Fine Mess We've Got Ourselves Inter: Newcastle United's Intertoto...
Suffice to say it’s been a while since Newcastle United won a trophy. As the Magpies prepare to [ ... ]
football
Antonio And Bowen Impress As West Ham See Off Derby To Book...
West Ham United booked an FA Cup Fifth Round trip to Manchester United as they defeated Derby County [ ... ]
football
Wrexham Get Potential Spurs Clash: The FA Cup Fifth Round Draw
National League Wrexham face a a potential visit of Premier League Tottenham Hotspur  in the FA [ ... ]
football
£25m Valued Everton Target Viktor Gyokeres Is Tailor-Made For...
No player in the Championship gets more praise from the opposition managers. No forward causes such [ ... ]
football
''We're A Real Club Again'' - What's Changed At Derby County...
New owner and lifelong fan David Clowes has made quite the impression at Derby County. At the start [ ... ]
football
Amanda Serrano Vs Erika Cruz: Everything You Need To Know
Seven-weight world champion Amanda Serrano will have her eyes set on making more history this weekend [ ... ]
football
Bring On The Sequel: Proud Wrexham Prove Their Quality Despite...
Wrexham came so close. They were just three minutes away from pulling off another FA Cup giant-killing, [ ... ]
football
Liverpool Are Out Of The FA Cup: Have They Invested In The Wrong...
Kaoru Mitoma scored a wonderful injury-time winner to dump holders Liverpool out of the FA Cup as Brighton [ ... ]
football
Great FA Cup Run Is Major Sign Of Wrexham's Progress Under Reynolds...
This week, ahead of their Fourth Round FA Cup tie with Sheffield United, Wrexham went to the top of [ ... ]
football
How Adam Lallana Has Transitioned From Midfield Maestro To Dressing...
Brighton & Hove Albion are preparing to face Liverpool for the third time this season as the pair [ ... ]
football
Brazilian Boys Star As Manchester United Progress to FA Cup...
Manchester United’s Brazilian boys dazzled to send the club through to the FA Cup Fifth Round [ ... ]
football
Son Sparkles As Spurs Cruise Past Preston To Reach FA Cup Fifth...
A stunning brace from Son Heung-min helped book Tottenham Hotspur’s place in the Fifth Round of [ ... ]
football
Iheanacho Comes To Leicester City's Rescue Again: Why He Deserves...
Kelechi Iheanacho’s second-half strike was the difference as Premier League Leicester City defeated [ ... ]
football
Too Tinpot For TV: Why Are Bosses Wasting Yet Another Slot On...
“Please give me more Manchester United versus Reading,” said nobody ever. And yet here we [ ... ]
football
Antonio Conte Is The Underrated FA Cup Specialist That Can Win...
FA Cup specialists are hard to come by. Ashley Cole dominated the competition with a ridiculous and [ ... ]
football
Made In Manchester: How United And City Inspired McKenna And...
Saturday’s FA Cup fourth round clash between Ipswich Town and Burnley is an intriguing meeting [ ... ]
football
Gianluigi Buffon At 45: Italy's Elder Statesman Remains Young...
Gianluigi Buffon’s career looked like it might be reaching its end as early as 2010. At the age [ ... ]
football
Manchester City Remind Arsenal Why They've Ruled English Football...
Form is temporary, class is permanent. It’s a cliche so rote that Chat GPT would probably put [ ... ]
football
Ward-Prowse Needs To Leave Southampton Or Risk Becoming The...
Call me an old cynic but I’ve got a feeling Southampton are going to get relegated this season. [ ... ]
football
Road To Wembley Part 10: Birmingham's Decline From Twin Towers...
The Sportsman’s Road To Wembley has taken us to the West Midlands after Birmingham City got [ ... ]