Football
News
England were second best in all areas of the pitch on Friday
Conor Keane
21:01, 25 Nov 2022

USA were unfortunate to only come away with a point against England as they gave the Three Lions a lesson in pressing in Qatar. Gregg Berhalter’s side were the better side throughout the entire game as their relentless ball chasing and swift breaks were too much for Gareth Southgate’s side to handle.

The Stars and Stripes gave a good account of themselves last time out against Wales but everyone knew that England were going to be the biggest test and they definitely passed. Their organisation and discipline was brilliant. England’s star-studded midfield of Declan Rice, Jude Bellingham and Mason Mount were given the run around by Yunus Musah, Tyler Adams and Weston McKennie. England’s three lions in midfield were chasing shadows for much of the game, which is the greatest of compliments to USA.

And the US could have had much more. They had some excellent opportunities to score and take the game away from England. Christian Pulisic rattled the bar and McKennie fired over from inside the area, not to mention the countless corners they kept forcing as England struggled to get out of their own half.

To further highlight how much they dominated England, Harry Maguire was by far the Three Lions’ best player. The Manchester United defender never seems to put a foot wrong in an England shirt and he was a colossal presence in defence tonight and England coming away from the match with anything at all is mostly down to him.

The World Cup is unforgiving when you don’t take your chances and Berhalter’s side could’ve put themselves in a great position to reach the knockout stages ahead of their final group fixture against Iran. But they will take pride in what was an exceptional team performance with them into that game with it all very much to play for in this group. 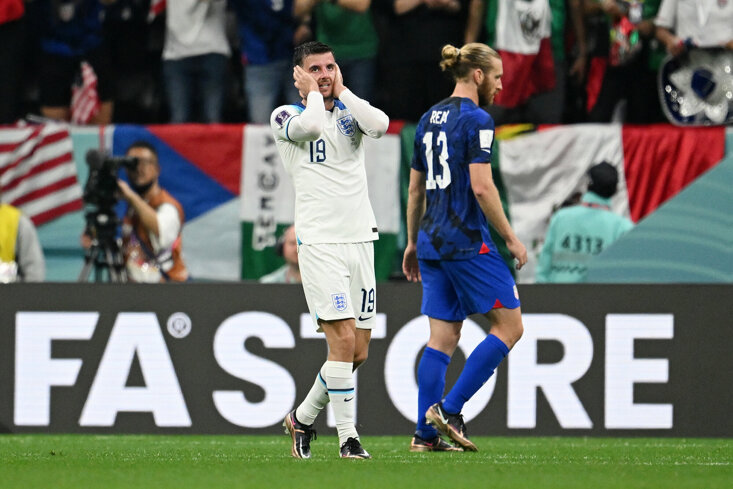 Harry Kane had the first opportunity of the game. The striker received the ball from a neat pull-back from Bukayo Saka after the Arsenal man had been set away by Bellingham, and his effort was blocked by Walker Zimmerman. USA then gave England something to think about as Haji Wright saw a header sail past the post as he beat Maguire to the ball. They then had a great opportunity to open the scoring as a cross found McKennie unmarked in the area but he blazed his effort over the bar.

The Stars and Stripes were on the ascendancy as the first half wore on. A neat turn from McKennie set USA away and the move ended with Christian Pulisic rifling an effort against the crossbar as England were leaving themselves vulnerable. USA were making their presence known as they were first to every ball and looked much brighter going forward. England’s half mirrored some of the turgid performances they had in the build-up to the tournament. The Three Lions were able to lift the fans slightly before the break as Mason Mount forced a save from Matt Turner at his near post.

England came out looking a little more spirited for the second half but USA were still proving to be troublesome with their relentless pressing. The Stars and Stripes were by far the more dangerous side and there was a period where England had to put their bodies on the line to deal with a barrage of corners - they just couldn’t get out. Southgate needed to freshen things up and off came Bellingham and Sterling for Jordan Henderson and Jack Grealish. Henderson’s addition was strange, it was clear Southgate knew his side were getting overpowered in the middle of the park and that Henderson coming on was to settle things down and effectively see out the point. Marcus Rashford replaced Saka shortly after but none of the substitutes could spark England into life. They really got away with one tonight.