The Ashes is one of the oldest and most compelling competitions in sport. Cricket’s famous test series is drenched in 137 years of history and predates the foundation of the English Football League, the Masters, and even the modern Olympics.

This summer’s edition of the Ashes is the 71st between England and Australia, with the latter leading the series by just 33 wins to 32, while five have been drawn. Over time, the two countries have created one of the most enduring and transfixing rivalries; filled with drama, controversy and sledging.

But how did it all come into play and which incidents in particular have contributed to stoke the fires - which on occasions have spilt into serious bad blood? Below we take a look at the evolution of the most famous rivalry in cricket.

Origins of a Rivalry

Cricket has its origins in 16th Century England. Over time, the sport spread globally and it was introduced to Australia in 1788 when the first fleet of British ships arrived during the Colonisation period.

In 1868, an Australian Aboriginal team toured England, during which they played 47 matches spread out over a six-month period (W14 L14 D19). Nine years later, in 1877, the first test match between Australia and an England touring team took place at Melbourne Cricket Ground, which was won by the hosts. Five years later the Ashes was created… 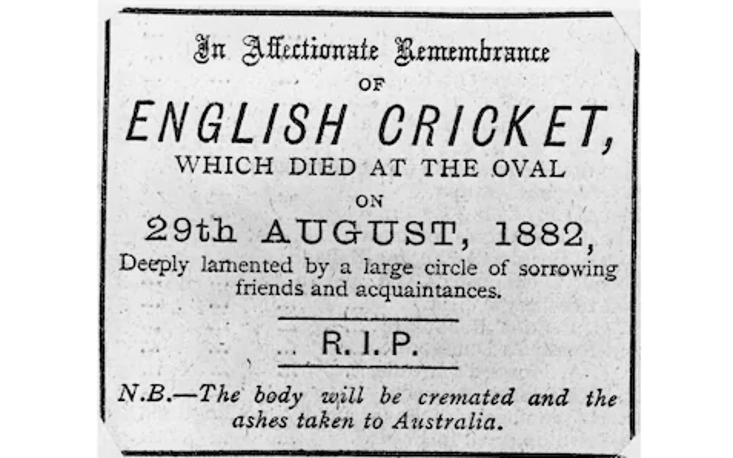 The famous, or infamous, mock obituary from the Sporting Times

Foundation of the Ashes

On August 29, 1882 Australia beat England in a single test in London at the Oval. It may not have been a high-scoring affair but it was a real nerve-shredder. In the first innings, Australia were bowled out for just 63 while England carded 101. Australia responded with a score of 122, then bowled the hosts out for 77 to win by seven runs.

The Aussies were overjoyed at their triumph - their first on English soil - in stark contrast to England who were left absolutely crushed at the defeat. The Sporting Times journalist Reginald Shirley Brooks was so mortified he published a mock obituary, in which he labelled the loss as "the death of English cricket" and that "the body will be cremated and the ashes taken to Australia"

And so began the oldest international sporting rivalry on the planet.

England, captained by Hon. Ivo Bligh, vowed to bring the "Ashes" home. He stayed true to his word as England came from behind to beat their rivals 2-1 to claim the very first Ashes series.

A Melbourne woman named Florence Morphy - who would later become Bligh’s wife - reputedly filled a tiny perfume jar (urn) with the ashes of the burnt bails, and presented it to Bligh in a red and gold velvet bag on Christmas Eve 1882. The concept of the iconic urn grabbed the imagination of the public and replicas have since been awarded to each winner, while the original now resides at the MCC Museum at Lord's cricket ground in London, and is believed to be the smallest trophy in sport.

The moment the rivalry began to move away from its ‘Gentleman’s Game’ origins - and really spark into life - can be pinpointed back to the 1932/33 series.

It was a series shrouded in controversy as England resorted to ‘Bodyline bowling’, an intimidating tactic devised to combat the skills of the legendary Australian batsman Don Bradman, who scored 974 runs in the previous series between the sides.

England captain Douglas Jardine instructed his bowlers fire down deliveries at the body, far from the ideals of a ‘Gentleman’s Game’, with the unsportsmanlike act unsurprisingly sparked ill-feeling, and Australia’s captain Bill Woodfull would famously say:

“There are two teams out there on the oval. One is playing cricket, the other is not."

Aluminium bats, the spirit of cricket, and fist fights

In the first test of the 1978/79 series Australian fast bowler Dennis Lillee strolled up to the crease clutching an aluminium bat, much to the confusion of the England players. It was actually legal, but after much persuasion, Lillee continued with a normal wooden bat. Shortly after he was dismissed. The rules have since been changed.

In 2005 Australia captain Ricky Ponting fired expletives towards England coach Duncan Fletcher for his liberal use of substitute fielders - Ponting was famously ran out by sub Gary Pratt.

The Aussies were also left fuming on the third day of the first test in the 2013 series, when Stuart Broad refused to walk out despite clearly edging Ashton Agar's delivery to first slip. They had no reviews left so were unable to overturn the decision of the umpire, who bizarrely didn’t show Broad the door, and England went on to secure a controversial 14 run victory.

The spirit of cricket was subsequently called into question, while Australian coach at the time, Darren Lehmann, said:

"I hope the Australian public give it to him right from the word go for the whole summer. And I hope he cries and goes home. I don't advocate walking, but when you hit it to first slip it's pretty hard."

In the build-up to that particular series we also had THAT incident between David Warner and Joe Root, when Warner punched his fellow batsman at Walkabout bar in Birmingham.

These are just a selection of recent incidents which have all combined to add extra spice to proceedings.

Cambridge Dictionary Definition of Sledging: The act of one sports player insulting another during a game, in order to make them angry.

Volcanic verbal barbs have been used to devastating effect during Ashes tests. Most are humorous, some are savage, while others are career-ending. Even the crowd has also played its part in the shenanigans: “Oi, Tufnell! Can I borrow your brain? I’m building an idiot,” roared an Australian fan to Phil Tufnell.

Here is a selection of some absolute gems - click here for more.

Hughes: “Mate, if you just turn the bat over you'll find the instructions on the other side.”

Ormond: “Maybe not, but at least I’m the best player in my own family.”

Warne: “You’ve got an MBE, right? For scoring seven at The Oval? You’re an embarrassment.”

“It’s as simple as us Aussies hate losing to the Poms. It runs so deep, deeper than I could ever imagine. That gives you that extra edge to your performance.”

Amidst all the sledging, controversy, and unsavoury incidents the rivalry has also produced moments of heartwarming sportsmanship. The most famous of which came during the 2005 series, which is widely regarded as one of the greatest ever, when Andrew Flintoff commiserated with a crestfallen Brett Lee after a dramatic two run-victory to level the score at 1-1.

x
Suggested Searches:
Tyson Fury
Manchester United
Marcus Rashford
Lewis Hamilton
F1
Air Jordan
More
cricket
Weather No Excuse, England Must Learn From Woeful Batting Performance...
How quickly things can change. England’s 227 run win in the First Test v India feels like a lifetime [ ... ]
cricket
Why A Massive Fourth Test Against India Could Define England's...
England’s whole year might well ride on the outcome of Thursday’s Fourth Test against India. [ ... ]
cricket
Brittle England Beaten Inside Two Days As India Survive The...
It was one of the most chaotic days of Test cricket ever but by shortly after tea on day two in Ahmedabad [ ... ]
cricket
Sidebottom Wants To See Both Broad And Anderson Play Third Test...
Former England bowler Ryan Sidebottom says England ought to select both Stuart Broad and Jimmy Anderson [ ... ]
cricket
The Hundred Can Help Revolutionise Women’s Cricket And Inspire...
The long-awaited The Hundred competition is set to revolutionise cricket and will finally kick off this [ ... ]
cricket
Should Test Cricket Lose The Toss After India's Battering Of...
England have nobody to blame but themselves for the manner of their 317-run mauling at the hands of [ ... ]
cricket
Sidebottom Hails ''Fantastic'' Root And ''Stunning'' Anderson...
Ryan Sidebottom has heaped praise on both Jimmy Anderson and captain Joe Root following England’s [ ... ]
cricket
Fantastic Jimmy Anderson Wraps Up A Statement England Win In...
England wrapped up a dominant First Test win over India on Tuesday, with Jimmy Anderson collecting three [ ... ]
cricket
100 Up! Joe Root's Timely Form Could Be The Difference For England...
He is the baby-faced batsman who slotted into England’s line-up in India in 2012-13 and immediately [ ... ]
cricket
Tailenders Is The Easy-Listening Pod That Takes An Alternative...
At the moment, we’re all enamoured with cricket, thanks to India digging in and out-saucing the [ ... ]
cricket
The New Book Shining A Light On The Biggest Scandal In Cricket...
It has been nine years since the News of the World ceased publication. Nine years. Doesn’t time [ ... ]
cricket
How Botham And England Revived The Spirits Of A Nation At The...
In the summer of 1981 a combination of spiralling unemployment and racial tension had led to riots in [ ... ]
cricket
Ben Stokes Inspires England Victory In Five-Day Test Classic
This was five-day test match cricket at its finest. Ben Stokes took the final three wickets on Tuesday [ ... ]
cricket
Batting Legend Tendulkar Warns ICC Five-Day Tests ''Should Not...
If you’re looking for a cricket batting record, odds on Sachin Tendulkar probably owns it. The [ ... ]
cricket
England Head To South Africa Test In Search Of Answers And A...
England end a historic 2019 by taking on South Africa in the First Test in Centurion this week. But [ ... ]
cricket
England World Cup Winner Moeen Ali's Conscious Uncoupling From...
“I just want to get that buzz back”. England’s Moeen Ali has continued to put [ ... ]
cricket
England Fail To Win A Test Series In A Calendar Year For First...
England have lost another Test series in 2019, which brings to a close a difficult 12 months that has [ ... ]
cricket
Joe Root Double Century Gives England A Glimmer Of Hope Against...
Joe Root hit a stunning double century to give England a slight hope of victory against New Zealand [ ... ]
cricket
Pope Steps Up After Baffling Selection Leaves England Short...
It is ever difficult to predict exactly what will unfold when England go on tour. Ollie Pope, a man [ ... ]
cricket
Book Review - Ben Stokes: On Fire
Like rugby, cricket fancies itself as a bit of a proving ground for leadership and performance techniques, [ ... ]
cricket
Ben Stokes Throws His Weight Behind ''England's Best'' Joe Root
Ben Stokes has leapt to the defence of under-fire England Test captain Joe Root following the heavy [ ... ]
cricket
The Time Has Come For Joe Root To Step Down As Captain And Focus...
Joe Root loves a soft dismissal these days.  Should England decide to move him aside as captain [ ... ]
cricket
Steve Smith's Welsh Fire To Face Oval Invincibles In First Game...
Steve Smith and Jonny Bairstow will clash with Jason Roy and Sam Curran in the world’s first-ever [ ... ]
cricket
England's 'New Era' Gets Off To Worst Possible Start Against...
England's 'new era' under Chris Silverwood got off to a humiliating start with a huge innings [ ... ]
cricket
Why England's T20 Triumph Over New Zealand Matters More Than...
There could not have been a more fitting antidote to the slightly subdued atmosphere surrounding England’s [ ... ]
cricket
Silverwood Over Kirsten Is The Right Choice For England's New...
England have confirmed the appointment of Chris Silverwood as their new head coach to Trevor Bayliss, [ ... ]
cricket
Why Ashes Win For Australia Could Be A Good Thing In Long Term...
It might well have been a headline from 2019. That famous obituary we all know so well, written [ ... ]
cricket
Five Things That Prove Steve Smith Ain't Perfect
Steve Smith. The best batsman in the world and seemingly impossible to get out from an English point [ ... ]
cricket
Manchester In The Rain: Five Things To Do When The Ashes Is...
Ah, Manchester. The proud home of The Sportsman is known throughout the world for its music, sport and [ ... ]
cricket
Ashes Hero Ben Stokes Must Be Considered Test Cricket's Best...
With every switch-hit, Ben Stokes eclipsed Botham of ’81. In the process, the third Ashes Test [ ... ]