Football
News
It was a brutal display of dominance from England, who have now won Group A
Simon Lillicrap
21:52, 11 Jul 2022

It was brutal. It was clinical. It was brilliant. England ran riot in the sunshine on the south coast as Sarina Wiegman’s side laid down a marker with a remarkable 8-0 win over Norway, which sent them into the quarter-finals of Euro 22 with a game to spare.

If the first game at Old Trafford was a nervous encounter, this one was a limitless celebration of joy. Goal after goal after goal went in and the crowd embraced the Lionesses who showed incredible hunger to seal top spot in the group.

Beth Mead was on fire as she bagged a hat-trick, Ellen White was back to her best as she bagged two,  and Fran Kirby and Lauren Hemp were electrifying. When they attack like this and play with such confidence, it is difficult to think of any side in the competition that could stay with them.

The first goal was a fortunate one from the penalty spot, but from there it was a magical display of attacking movement and finishing. White pulled off a wonderful nutmeg in the box before going down easily, but VAR stuck with the referee's decision on the field. Georgia Stanway made no mistake from the spot as she nailed it into the top corner.

England were on fire and Mead caused all sorts of problems down the right-hand side. She cut in and squared the ball across goal to Hemp who tapped in from close range. The linesperson initially had her flag up to halt England’s celebrations, but VAR sent the AMEX wild.

The nerves that had surrounded that opening day win over Austria had evaporated and this was the vibrant and exciting England side that Wiegman has created, on show for the world to see. Brighton was the perfect backdrop to this performance and even though the crowd wasn’t as big as the one at Old Trafford, the atmosphere was equally as special.

Before the half hour mark, White got her tournament off the mark. She bullied Manchester United defender Maria Thorisdottir off the ball and raced through on goal one on one. In these scenarios, she is so reliable in front of goal and she slipped the ball past the goalkeeper to bag her 51st goal for her country. 3-0 to England. 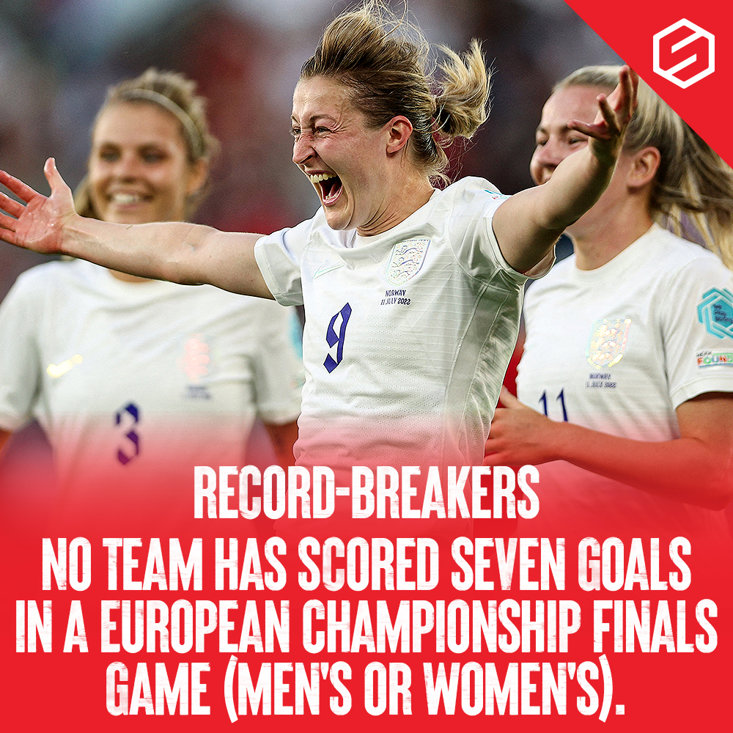 One of the defining factors of Wiegman’s team has been their relentlessness. Chances just kept on coming for a brutal England side that bullied their opponents. White was denied from close range by a smart save. But they wouldn’t be denied for much longer. Hemp from the right this time whipped a wonderful ball into the box and Mead headed home her 16th goal in 15 games under the Dutch boss.

Mead showed that she was world class by adding the fifth with a wonderful individual effort. She jinked inside two challenges and left the Norway defence in tatters before slotting home her third goal of the tournament. She is the top scorer in the tournament so far but White was keen to keep the Golden Boot race interesting as she added a sixth before the break.

Kirby, who was electric in midfield was found with another incisive pass and she fired a cross to the back post where England’s top goalscorer was there to find the finish. This was scarcely believable, but in Brighton, England were brilliant.

The subs gave England renewed energy and one of them, Alessio Russo added the Lionesses seventh in the second half. She leapt highest to nod home a fantastic header and although the home side slightly took their foot off the pedal in the second half, they still bagged an eighth through the clinical Mead.

She completed her hat-trick after Kiera Walsh’s shot was spilled and the elite Arsenal forward tapped in from close range. This was an epic eight from an England side with aspirations to win the Euros this summer.

Group A winners, with Northern Ireland to come in their final fixture. This was the biggest statement of intent that the Lionesses could have ever produced.