The group stages are done and dusted, and it did not go according to plan for this column, who ended the section just under eight points down on level stakes, but with some very near misses. I am still struggling to see how Alexander Isak has not scored in this tournament yet, while we were one yellow short on three occasions of landing bookings markets!

Not to be deterred, we move on.

The Euro 2020 knockout stage gets underway with two absolute crackers, and it is fantastic that Wales have made it out of the group stage for the second successive Euros campaign.

Their reward is an Amsterdam match-up with Denmark (5pm BBC), who overcame tragedy and adversity to book their place in the last 16 by routing Russia in Copenhagen.

On paper Denmark should be warm favourites, especially as they did the double over Robert Page’s side in the Nations League recently, 2-0 winners at home and a 2-1 victory in Cardiff. They are odds-on at 5/6 to win the match and 4/11 to book a quarter-final spot. They will be full of confidence as their form throughout the tournament has progressed, but lots has happened in the last two weeks with the tragic events of matchday one and Christian Eriksen bonding the team and their nation further than anyone could envisage. But the fact remains that they have lost the creativity of their talented talisman and that will be felt more now in knockout football.

Wales have got their main men firing on all cylinders with Gareth Bale and Aaron Ramsay pivotal to their progression. Bale is 5/1 to score first with Betfred with Ramsey 12/1, while they are 5/2 and 11/2 respectively to score at any time.

Their form ensured a relatively smooth passage into the last 16 despite a narrow loss to Italy in Rome in their final game. They can go into this game without any pressure and there will be plenty of takers at 4/1 they get the deal done in 90 minutes (2/1 to qualify), with the draw available at 23/10. 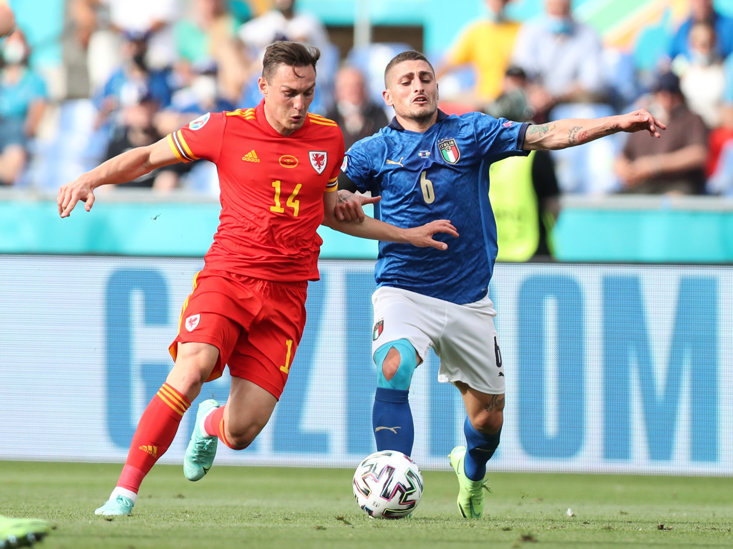 Ethan Ampadu will miss out after his red card versus Italy, while Denmark will run the rule over captain and centre-half Simon Kjaer, who would be a big loss if he missed out though injury.

I think this will be closer than the odds suggest, and extra time being required is a distinct possibility, making the draw a player.  That could help the underdogs as we found in 2016 how fit these Welsh players are when they overcame Belgium, with a late strike sealing the deal. Wales in extra time at 16/1 does appeal if it gets that far, but Denmark may just find an edge inside the distance and to win by a single goal at 23/10 to small stakes is the call.

The second game looks easier to predict as Italy have impressed many onlookers in three games so far and Austria are not expected to pose more of a threat than the Azzurri’s group victims. Italy press for the entire 90 minutes and should have too many guns for the Austrians, especially considering Roberto Mancini managed to rest many of his side in their final win over Wales when Marco Verratti ran the show on his return from injury. He will be pivotal again and could provide Ciro Immobile (11/4 score first, 6/5 anytime) and Lorenzo Insigne (4/1 score first, 15/8 anytime) with more chances.

Giorgio Chiellini is unlikely to be risked with a hamstring problem, but would be available if they were to reach the quarter-final (v Belgium or Portugal), while Austria will be giving late checks to a host of players, including to likely starters Christoph Baumgartner and Julian Baumgartlinger

Immobile to score in an Italian victory at 6/4 or Italy to win by two or more goals at 7/5 will both be popular punts. But such is the quality of the Italians so far and Austria failing to score in four of their last six matches, Italy to win to nil at 6/5 looks the best play despite missing the influence of their best central defender.