By the end of Wednesday evening we will know the line-up for the last sixteen for Euro 2020, but first we have four games to decipher.

At 5pm, Group E will come to a close and all four could still top the table. Sweden are already through and will take on Poland in St Petersburg while Spain play Slovakia in Seville and the calculators will be out in force to fathom who needs what during the 90 minutes.

Luis Enrique’s men are as short as 1/12 to head through but it’s odds-on that the other pair fail with Poland 6/4 and Slovakia 9/4 to book knockout football at the weekend but they each know victory confirms it.

Poland gave themselves a lifeline by drawing with Spain on Saturday. They were poor in their opening game when going down to ten men aided Slovakia but showed plenty of fight in Seville at the weekend. They will now need the quality to overcome a Sweden side yet to concede at the tournament. 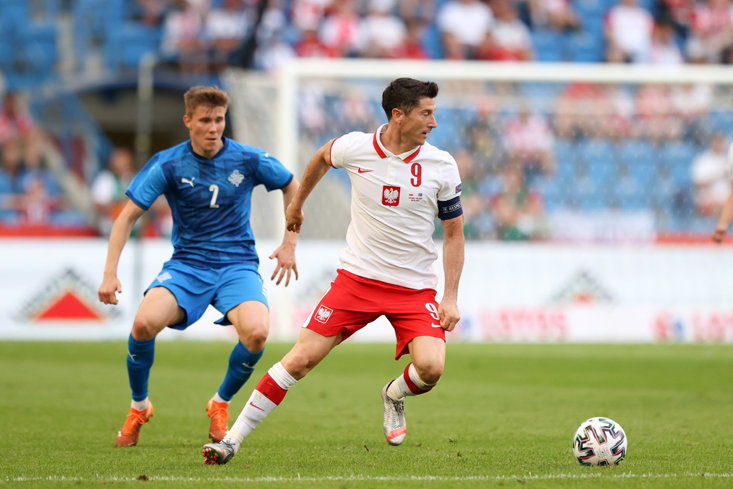 Paolo Sousa’s men have not beaten Sweden since 1991 and must break that hoodoo to stay in the tournament. The market has Poland as slight favourites at 6/4 and their need is greater with Sweden 15/8 and the draw 12/5.

Sweden could welcome back Juventus starlet Dejan Kilusevski (5/1 score anytime) who missed the opening game with Covid-19 and he could supply the impressive Alexander Isak with improved service. The Real Sociedad striker has done everything but score here but is 5/2 to score in this one.

The Poles once again relied on Robert Lewandowski (5/4 to score, 3/1 first goalscorer) to get them out of trouble, but I think the Swedes are the value in this one.

Spain have been wasteful in front of goal so far despite enjoying 85% possession versus Sweden and 76% against Poland, creating over thirty chances in 180 minutes.

Sergio Busquet’s return gives them a huge boost in midfield and if it finally clicks, then Slovakia could be in for a hiding. They impressed against Poland and created enough chances to take something against Sweden, but they could easily be cut apart if they play too open against La Roja. They are 1/5 to win the game, 16/1 Slovakia and 11/2 the draw, which is not the worse price should their troubled shooting continue.

It may take Spain until the second half to break the deadlock so a small play on draw at half time and Spain to win at 3/1 is the call.

With Gerard Moreno spurning a penalty, Ferran Torres may be restored to the line-up. 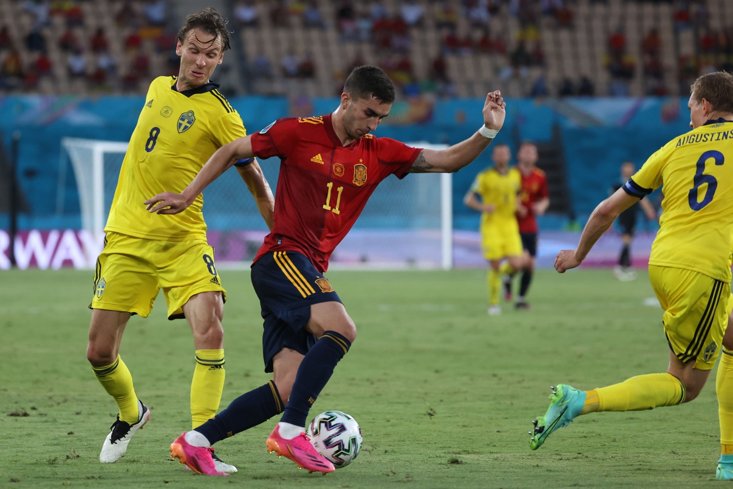 With Gerard Moreno spurning a penalty, Ferran Torres may be restored to the line-up.

At 8pm, we have the small matter of Group F to wrap up which starts in a similar vein to Group E. Here France and Portugal lock horns in Budapest in a repeat of the Euro 2016 final while Germany host Hungary in Munich.

France are through with four points while Portugal will qualify if they don’t lose by more than three goals and Germany, who themselves need just a point, avoid defeat to Hungary who know nothing less than victory will suffice.

Germany and France are both Evens to top the group and Portugal are 9/1l, while the Joachim Low’s team and reigning champions A Selecao are both 1/33 to qualify.

Didier Deschamps may well ring a few changes among his strong squad and back themselves in the knockout stages whoever they play. Les Bleus are 5/4 to win the game while Portugal are 11/4 to bounce back from a 4-2 defeat in Germany. The mutually beneficial draw at 2/1 is a big player, especially as Fernando Santos will set up to be tighter at the back after shipping four goals on Saturday.

Meanwhile, Hungary have been totally written off at 16/1 to beat Germany despite holding France at the weekend and keeping Portugal at bay for 82 minutes. Germany finally showed up against Portugal but you’d be a brave man to take 1/6 they follow it up tonight.

The Hungarians are 11/8 in receipt of a two-goal start (still a winner if they lose by a single goal) and I expect them to make it a difficult night for Die Mannschaft.

x
Suggested Searches:
Manchester United
Liverpool
Manchester City
Marcus Rashford
Premier League
More
football
Arteta's Arsenal Continue To Click In Solid 3-1 Win Over Aston...
Arsenal would have looked at tonight’s clash with Aston Villa as a potential banana skin. The [ ... ]
football
Martinez Finally Getting His Chance To Shine After Years Of...
When Emiliano Martinez was an Arsenal goalkeeper he played more league games for Reading than he did [ ... ]
football
The Cherries Look To Have Found Their Identity Again Under Scott...
It was only six years ago when AFC Bournemouth completed their fairytale promotion to the Premier League. [ ... ]
football
LIVE Football News: Europa League Reaction & Arsenal v Aston...
Thursday night had a bit of everything, with a record-breaking defeat for Jose Mourinho's Roma, [ ... ]
football
When ''Arsene Who?'' Changed The Face Of English Football
“Arsene Who?” asked a headline in the London Evening Standard, while one columnist said [ ... ]
football
Hammers Show Their Quality Against Genk While Rangers Brush...
West Ham United showed their quality in Europe again as they comfortably brushed aside Genk 3-0 at the [ ... ]
football
Spurs Look Directionless As They Fall To Europa Conference League...
It was a disappointing night for Tottenham Hotspur in the Europa Conference League as they came away [ ... ]
football
Premier League Injury Updates: Romelu Lukaku Ruled Out For A...
Romelu Lukaku’s midweek injury has left Thomas Tuchel in a dilemma. He is now set to be out for [ ... ]
football
Bingoalz Is The New Game That Will Change Saturday’s 3pm Kick-Offs...
Saturday’s 3pm kick-offs just got a whole lot more exciting! Combining football with bingo, Bingoalz [ ... ]
football
Why Scholes' Slating Of Man Utd's Tactics Is A Key Moment In...
“I looked at that game thinking about Liverpool on Sunday, maybe it's the wrong thing to do, [ ... ]
football
Why Are Goalkeepers So Underappreciated In The Ballon d'Or?
The 30-man Ballon d’Or shortlist raised serious questions when it was announced. Although the [ ... ]
football
LIVE: Thursday's Europa League & Conference League Action &...
Today's action sees British sides' West Ham, Spurs and Rangers all in action tonight, as well [ ... ]
football
FPL Gameweek 9 Tips: Cancelo Can Be The Main Man At The Back
If, like me, you put a lot of faith in the expensive forward duo of Cristiano Ronaldo and Romelu Lukaku [ ... ]
football
Ronaldo Decides Atalanta Thriller While Chelsea Count The Cost...
It all went wrong for Manchester United. Defensive problems abounded on a night where they were stretched [ ... ]
football
Messi, Lewandowski Or Salah: Who Should Win The 2021 Ballon...
This year, seemingly more than ever before the interest in the annual Ballon D’or has reached [ ... ]
football
Patson Daka Nets Four To Lift Leicester City Off The Floor In...
After scoring his first Premier League goal against Manchester United at the weekend, Patson Daka just [ ... ]
football
Henrik Larsson, Jimmy McGrory And Celtic's Greatest Goalscorers...
At just 5’6”, Jimmy McGrory didn’t look like your archetypal centre-forward, but the [ ... ]
football
The Best British Player Ever? It's Time To Put Some Respect...
Tottenham Hotspur lost the game, but Gareth Bale had made them a real force to be reckoned with. He [ ... ]
football
After Bruce's Inevitable Sacking, The Possibilities Are Endless...
His departure was an inevitability in so many ways. And, frankly, this is probably a case of perfect [ ... ]
football
How Do Chelsea Solve ''Tired'' Romelu Lukaku’s Goalscoring Conundrum?
When Chelsea announced the return of striker Romelu Lukaku in the summer in a whopping club-record deal [ ... ]
football
LIVE Football News: Follow Wednesday's Champions League Action...
What a sensational night of Champions League football we had on Tuesday. Ready for more of the same [ ... ]
football
Amad Diallo: The Former Atalanta Starlet Still Has A Big Future...
When Manchester United travel to the Gewiss Stadium in Bergamo, Italy tonight to face Atalanta, there [ ... ]
football
Record-Breaking Salah Mirrors Messi As Liverpool Secure Crucial...
As Liverpool made it three wins from three in the UEFA Champions League with a 3-2 victory over Atletico [ ... ]
football
Joao Cancelo Proves To Be Guardiola's Irreplaceable Cog As Man...
Joao Cancelo has such a presence in the Manchester City side and with a goal to his name in their 5-1 [ ... ]
football
Phil 2.0? Golden Cole Can Reach Foden Goal
Just when it feels like Phil Foden has finally transitioned from future superstar to automatic pick [ ... ]
football
Rooney? Howe? Conte? Who Could Replace Bruce At Newcastle?
As things stand, Steve Bruce is the manager of Newcastle United. However, his side’s 3-2 loss [ ... ]
football
LIVE Football News: Man City, Liverpool and Celtic In European...
Happy Tuesday, everyone! Arsenal 2-2 Crystal Palace closed out the eighth Premier League gameweek, with [ ... ]
football
Everything You Need To Know About This Week's Europa League...
The Europa League is back with Rangers, Celtic, West Ham and Leicester City all in action across the [ ... ]
football
Late Lacazette Strike Spoils Vieira's Return To Arsenal
Arsenal substitute Alexandre Lacazette was the party pooper on Patrick Vieira’s return to [ ... ]
football
Everything You Need To Know About This Week's Champions League...
The UEFA Champions League is back this week with Chelsea, Manchester City, Manchester United and Liverpool [ ... ]