Football
News
The Danes are more than capable of springing a surprise on Europe’s biggest stage again
Simon Lillicrap
08:00, 04 May 2021

Nothing will compare to Denmark’s surprise heroes of 1992, but almost three decades on, once again the national team is looking to make the rest of Europe stand up and take notice. For a team who failed to even qualify for the last edition of this tournament, it has been a remarkable rise in a short space of time.

Even so, the current crop of Danish superstars - of which there are plenty - are at least prepared to play in this summer’s event unlike their predecessors. In 1992, having failed to qualify for that year’s European Championships, Richard Moller Nielsen's men were sat on the beach when the news was confirmed - they would be replacing the war-torn Yugoslavia, having finished behind them in qualifying, at Sweden’s Euro 92.

The players were not as ill-prepared as you may have thought, having been aware of the rumours for a couple of weeks, but they went into that competition with no expectations. They were simply there to make up the numbers. In an eight-team tournament, Denmark were thrust into a group with 1990 World Cup semi-finalists England, hosts Sweden and France.

"We couldn't fail because there were no expectations. If we lost 5-0 three times then that would not have mattered," Kim Vilfort said upon reflection of his sides’ performance.

A drab 0-0 draw with the Three Lions was followed by a 2-1 defeat to the hosts, which left them on the brink of elimination. De rød-hvide were following the script to the letter. However, a remarkable 2-1 win against a French side that included Jean-Pierre Papin and Eric Cantona, saw them squeak into the semi-finals.

Peter Schmiechel was in between the sticks, Trabzonspor defender Lars Olsen captained the side and Brian Laudrup was the star turn in midfield. Their achievement was made even more remarkable as his brother Michael was not present due to a falling out with the manager, with Lynby’s Henrik Larsen’s the man entrusted to find the net. 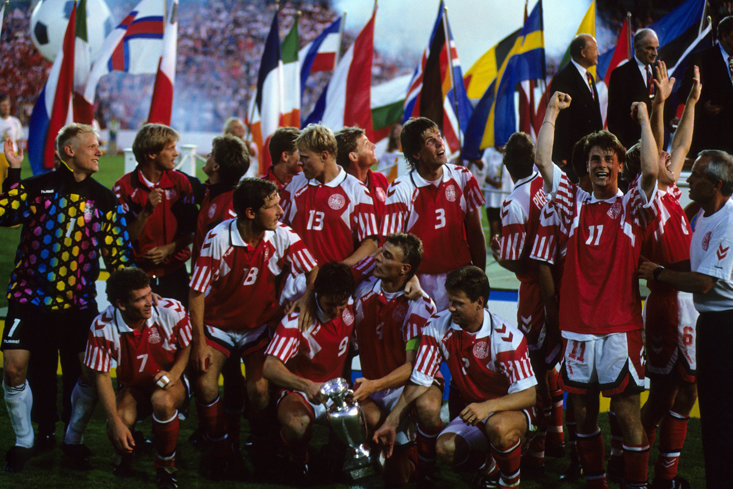 Larsen duly did so in the semi-finals, scoring twice against a hotly fancied Netherlands side that included Denis Bergkamp, Marco van Basten, Frank Riijkaard and Ronald Koeman - however after a 2-2 draw, the game would be decided from the spot. Five perfect Danish penalties followed and it was Van Basten of all people who missed the decisive kick. From nowhere, Denmark were in the final, where they would play the world champions West Germany.

Some things are just meant to be in football. John Jensen’s rocket from outside the area led Denmark to the most improbable victory as they were crowned European champions for the first and to date, only time. Now new boss Kaspar Hjulmand will hope to emulate his predecessor and lead this talented team deep into this summer’s tournament.

This obvious parallel is drawn in goal. Kaspar Schmeichel will follow in his father’s footsteps this summer as he targets international glory, but he has certainly lived up to the family name with his phenomenal performances. Other notable Premier League talents are Tottenham enforcer Pierre-Emille Hojbjerg and the defensive trio of Chelsea’s Andreas Christensen, Fulham’s Joachim Anderson and Southampton’s Jannik Vestergaard.

This is a remarkably talented squad. Milan’s Simon Kjaer offers experience along with Dortmund’s Thomas Delaney while Christian Eriksen is still the star in midfield. Brentford duo Christian Norgaard and Mathias Jensen are full of quality and could well have joined the Premier League party by the time the tournament kicks off while Barcelona’s Martin Braithwaite, Nice’s Kaspar Dolberg and RB Leipzig’s Yussuf Poulson all offer different threats up front.

In a group containing Belgium, Russia and Finland, this Denmark squad should qualify into the knockout stages. "We didn't have the best players, but we had the best team," was the mantra that carried them to glory three decades ago and nowadays there may be three times the amount of teams as in 1992, but perhaps the Danes can spring a surprise on Europe’s biggest stage once again.

Check out our other Group B previews: Belgium, Finland and Russia