Football
News
The decision to spread the tournament across the continent has skewed the competition
Kris Voakes
12:02, 04 Jul 2021

Italy, Spain, Denmark, England. Four semi-finalists but also four hosts. To some, the elimination of some of the more fancied countries was a surprise. But if you look at the differing levels of physical demands placed on players at this pan-European Euro 2020 tournament, perhaps this was the inevitable consequence.

As the crow flies, and therefore at a very conservative estimate, teams will have covered 123,481 kilometres between them by the time the final four congregate at Wembley on Tuesday and Wednesday.

England have travelled only 2,880 of those, while Switzerland’s journey from their homeland to Baku, to Rome, then back to Baku and on to Bucharest and Saint Petersburg accounted for 13,416km. Their shortest journey was 1,997km for their clash with France in Bucharest. And that’s not even including the flight back to Bern after their quarter-final penalty loss to Spain.

Belgium and Ukraine were also asked to fly back and forth constantly during their campaigns, while Wales’ solo respite was when they stayed in Baku between group games. Other than that, Robert Page’s men flew 5,000km to Azerbaijan for their opener, 3,000km to Rome to face home side Italy and then another 1,200km to Amsterdam to face a Denmark side who had had a short 350km journey from Copenhagen, their first away trip of the Euros.

When Michel Platini announced in 2012 that this was what was in store for us at Euro 2020, he did so just 11 days after the Euro 2012’s Local Organising Committee had invited a group of children still affected by the fall-out of the nuclear catastrophe at Chernobyl in 1986 to attend a game in Kiev. Lucky enough to be there, and at a presentation ceremony prior to the match, I was impressed by the work that Uefa was doing to leave a lasting impression in the local communities in Ukraine and Poland, the two host countries that year. 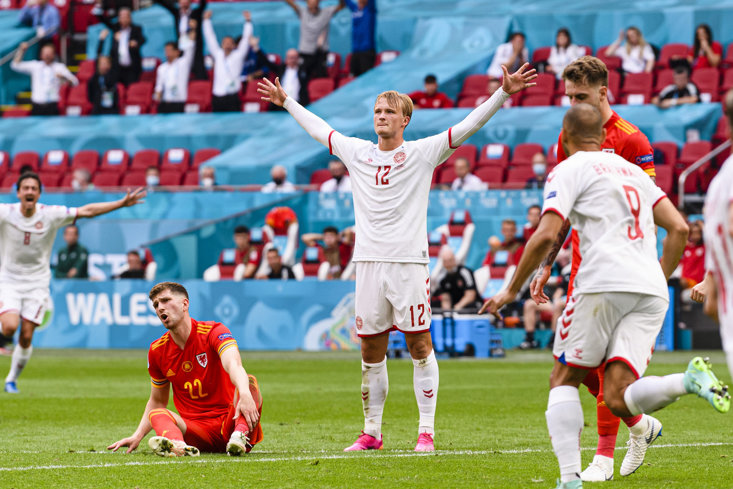 WALES LOOKED EXHAUSTED BY THE TIME THEY MET DENMARK

But the decision to spread the tournament across Europe leaves less opportunity to leave such a legacy. It doesn’t shine a light on the disadvantaged in nations which are suddenly the centre of attention for a whole month. Instead, the format used in 2021 means countless pointless aeroplane journeys from one side of the continent to another, with the carbon footprint issues that come with them.

Throw in the context of the Covid-19 pandemic, and the ridiculous bending of protocols for the Uefa invitees who need to break self-isolation after international travel from one game to another, and we find an unworkable format which has been played out away from the glare of the TV screens.

And the end result on the field has been a huge home advantage for those sides who were handed a travel cost of zero for the first week-and-a-half of the tournament. Of the six nations to play every group game on home soil, four have made the semis, Germany lost to fellow hosts England and the Netherlands lost to the Czech Republic as soon as they made their first trip out of Amsterdam.

Home advantage clearly matters. Of 21 host nations in World Cup history, only South Africa in 2010 have ever failed to get out of the group. Having more than one country play at home with such regularity warps the levelness of the playing field far too much.

England now have the luxury of returning to Wembley following their 1,440-kilometre trip back from Rome, knowing that a victory over Denmark on Wednesday will see them play in a final at their own national stadium for the first time since 1966. That is their only previous final in a major tournament, and their run to the last four this year marks only their second Euro semi-final since its early days as a four-team finals competition. The other, of course, was when they hosted the event in 1996.

At least one country has to host these major events, that much is obvious. But while Euro 2020 has been at times exhilarating, it has also served to show that having too many nations benefit from home advantage can only be a bad thing. This is an experiment which can surely never be repeated.